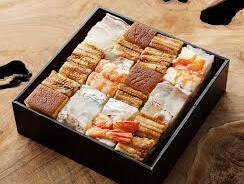 Sushi, which was originally made from pickled seafood, evolved from narezushi into namanare and then developed into kokerazushi. In the Edo period, fish, thick omelets, seawater eel, shrimp and other seafoods were pressed with sushi rice into wooden boxes to make beautiful hakozushi. This was the beginning of Osaka sushi (or Kansai Sushi). After that maki-zushi (rolls), battera-zushi, and bo-zushi gained popularity and they became collectively referred to as Osaka sushi. Also, before nigiri sushi was invented, the term “sushi” meant this form of hakozushi.

One characteristic of Osaka sushi is that kombu-dashi (kelp stock) is used in sushi rice. This can be called wisdom unique to Osaka sushi, which uses high volumes of sugar. Osaka Sushi, which is eaten cold, uses this high amount of sugar in order to prevent the moisture from separating from the starch. However, the large amount of sugar overtakes the taste of salt. This ends up breaking the balance of the flavor achieved by the salt and vinegar. Furthermore, that salty flavor sharpens as the temperature falls. However, adding dashi here can prevent the sugar, salt, and vinegar from falling apart. Furthermore, the antiseptic action of the kelp also has the effect of preventing spoilage. Another interesting point is that with Osaka sushi, the tradition of a strong sweetness due to using more sugar than nigiri sushi, not only Osaka sushi (hakozushi) but also Osaka’s nigiri sushi uses sweet sushi rice giving it a sweet and mellow flavor.

Furthermore, things like slowly cooling the vinegar rice and for example, with bo-zushi, the work of kneading the vinegared rice before adding it to the topping (which is normally aji, saba, hamo, ebi, etc.) is important. The purpose of this work is to control spoilage, improve the adhesive properties of the vinegared rice, and eliminate the space between the grains of rice. These tasks are not performed for nigiri-zushi and are unique preparation methods for Osaka sushi. If this work is not performed, there is a possibility that the vinegared rice may turn while the fish is maturing, so it is important. Unlike Edo-style sushi, which is consumed immediately after preparation, in Osaka sushi, vinegar is absorbed down to the center of the rice, the sushi is flavored thoroughly so that the sushi can be enjoyed at a later time, even after cooling. So, hard rice (moisture content of 13 to 14%) is used rather than soft rice (moisture content of 15 to 16%) which is crushed easily. On the other hand, soft rice is preferred for nigiri sushi, which is made softly with only slight pressure, as it doesn’t hold well with hard rice.

Osaka sushi focuses on a beautiful appearance unique to the Kansai region. It’s also laborious, taking at least one to two days to prepare the carefully selected ingredients like grilled sea eel, thick omelet (tamagoyaki), kodai, kuruma ebi, etc. While completely different from Edomae sushi, Osaka sushi has its own charms and you should definitely try it when given the chance.

2 thoughts on “What is Osaka (Kansai) sushi?”