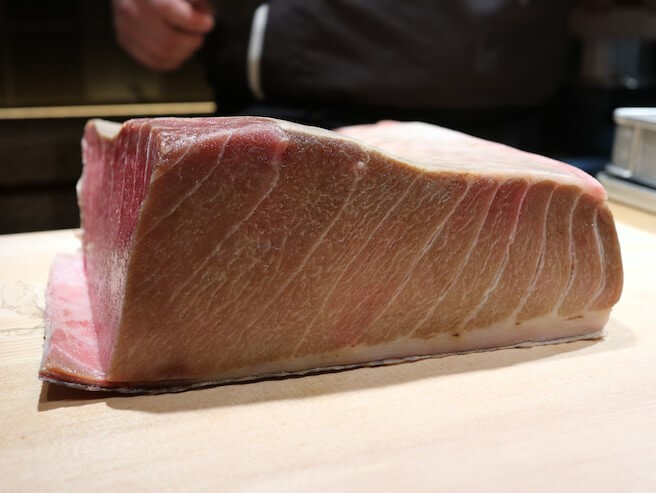 The fish used in sushi is generally salted or soaked in vinegar then matured for a number of days while the umami Inosinic acid component increases. This is called “Jukusei” (aging). Sushi made with toppings that have been aged in this way are called “Jukusei sushi”. The aging period depends on the type, individual size and origin of each fish, and some are even aged for over four weeks. However, the preparations are not only difficult and time-consuming, the discolored parts and inedible parts must be trimmed, so these toppings tend to be expensive. If gone too far, the Inosinic acid converts to hypoxanthine and rots. The ability to make this judgment is important. In the end, Jukusei is an evolved version of the culture of “maturing toppings” which existed in Edo-style Sushi.

How to Jukusei? (How are sushi ingredients matured?) 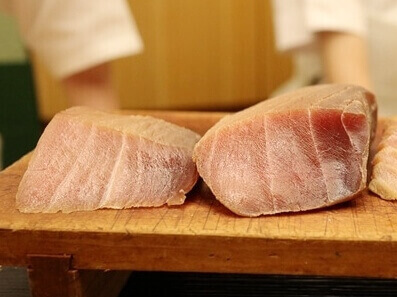 In order to mature seafood, after completing advance preparations (removing the head and internal organs then washing thoroughly; all blood must be removed), more than adequate considerations must be made for the fat content of the fish and management of the bodily fluids. Specifically, this includes processes like dry aging at a low temperature, removing moisture using salt, utilizing enzymes and fermentation, wet aging by putting the item in a vacuum pack, and wrapping in aging sheets, which were developed thanks to Foodism. These processes may be used alone or in combination, whichever process is most suitable for the fish.

In the initial stage of ‘jukusei’ (maturing), the increase in inosinic acid (the umami component) improves the taste. After that the inosinic acid starts to decrease, and once the long-term maturing stage (two weeks or more) starts, free amino acids such as glutamic acid and aspartic acid really start to affect the flavor. This has all been learned in research.

For example, for white flesh fish, a somewhat high amount of salt is sprinkled on the fish before it is stored in a refrigerator set at 3 to 4℃ with a humidity of at least 85%. The fish is not wrapped at this time. The fish is flipped over 3 to 4 times a day so that the moisture is extracted evenly. Several days later, the salt on the surface of the body and the body fluids that have seeped out are washed off with water (or thin saltwater). The fish is then wrapped in paper towels and then plastic to avoid contact with the air, and it is stored in a refrigerator at 1 to 2℃. Once the chef deeps the fish is ready, it is trimmed. Excess moisture is removed and then the maturing process continues.

We would like to take this time to point out that fish like Tai (Red seabream) and Buri (Japanese amberjack) are clearly more delicious when matured. However, when farmed tai and farmed hamachi are matured, the scent of the feed they were raised on comes out, so these are better eaten fresh, as sashimi, instead of maturing.

Blue-backed fish like Aji (Horse mackerel) and Iwashi (Japanese sardine) are also not suitable for maturing. Blue-backed fish lose their freshness quickly and judging the maturity is extremely difficult. Furthermore, if the fish is matured without sufficient advance preparations, bacteria breed in the remaining blood and organs. This may cause food poisoning.

These fish can be matured using the following method. The fish is put in salt-ice (water cooled with ice and salt) as soon as it is caught. It is sent to the sushi restaurant in this state and left in the refrigerator to rest for several days. Unfortunately, what happens after this is apparently a trade secret.

The easiest method is to wrap in an aging sheet and put it in the refrigerator. After that the chef trims the fish, checking the state of it. An aging sheet is a cloth made from purely breeding a ‘mold’ that is harmless to the human body, and putting cultures of its recovered spores into the cloth. Originally, it is intended to be used to age meat, but it’s just started to be used for seafood too.

Finally, in a method used for ages by sushi chefs, the akami and toro (tuna) portion are taken out and the chiai* portion is removed to be matured. This is then wrapped in paper towels, put into a plastic bag in order to prevent drying out, then put into the refrigerator to rest. The temperature setting is the most important part of this process and, obviously, this is an industry secret. The chef needs to check the state of the tuna (for example whether the white lines are soft and whether the oil has risen), and any discolored portion is trimmed. After that it is refrigerated. This process is then repeated.

＊“Chiai (血合い)” is the part with the most veins, so it is a dark red color. It has a strong odor of blood and has multiple times the acidity of the lean meat, so it is not used as a sushi topping.