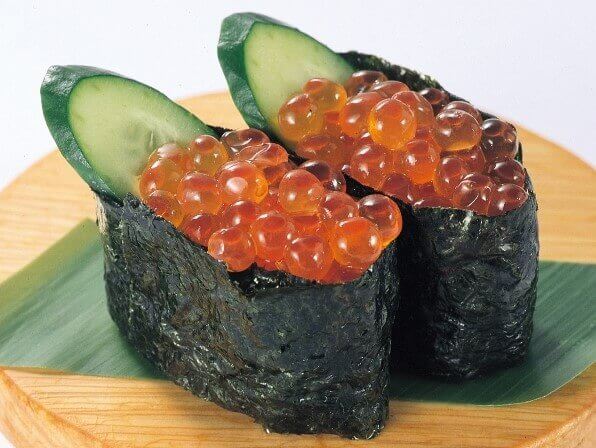 Immature salmon eggs still wrapped in ovarian membrane and salted are called sujiko. Ikura is salmon roe in which each mature egg is separated from the ovarian membrane before laying the eggs and then salted or marinated in soy sauce. The ikura of Chum salmon going upstream in the Kushiro River and Tokachi River in Hokkaido From October to December are considered to be premium ikura.

For cheap ikura, roe broken up inside the ovarian membrane in a fish that is approaching spawning time called “barako” is used. When the ovarian membrane of barako is torn, the eggs will fall out and scatter, so while they don’t take much work to prepare for serving, they also don’t taste particularly good. Even cats turn up their noses at barako, so they are also called “neko-matagi”, which literally means “the cat walks over it” and is used to refer to unpalatable fish. However, each egg is large and they look very appealing, so they are used at higher-end conveyor belt sushi. Unlike the 100-yen (US $1) restaurants, these higher-end restaurants don’t use disguised fish or substitute fish. This is because their basic business strategy is to differentiate themselves by attracting customers with authentic toppings. Generally they market the high quality of their toppings, but the ikura is actually this cheap “neko-matagi”.

Beneath this strategy of attracting customers with authentic toppings is this “Deceptive business strategy”. Salmon also swims upstream in the rivers of Tohoku and Hokuriku. However, the taste of ikura tastes inferior to that in Hokkaido. This ikura is also served at the higher end restaurants. That’s because although it doesn’t taste as good, it’s orthodox ikura. In case of orthodox ikura, the roe is used within one hour of the catch. But, if time passes and the freshness drops, the eggs will dry out and the surfaces will dimple, wrinkling. This is the type of ikura that is cheaper and often served at the cheap conveyor belt sushi restaurants.