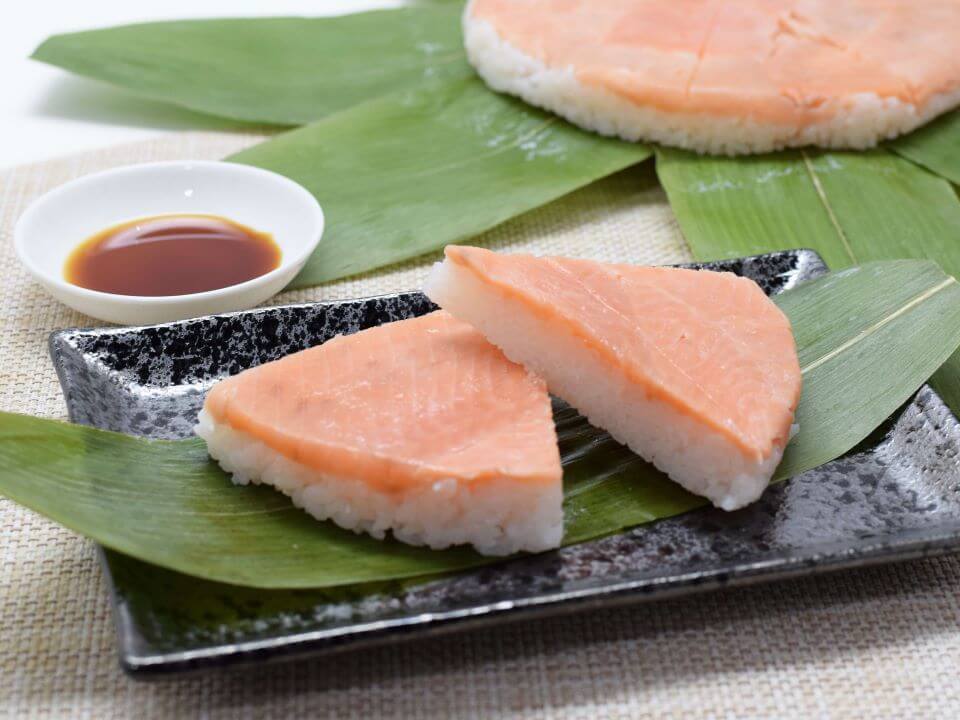 The origin of Masuzushi dates back about 300 years. Apparently, in 1717 it was first presented as Ayu narezushi (narezushi is a traditional food, said to be the original form of sushi and made from lactic fermentation of fish) to the third-generation feudal lord, Toshioki Maeda, by Shinpachi Yoshimura, a feudal retainer of Toyama who excelled in cooking skills. Toshioki liked the dish very much and assigned the role of vinegaring Ayu to Shinpachi. After that, it is said that the same narezushi was presented to the eighth shogun of the Tokugawa shogunate, Yoshimune Tokugawa, and that Yoshimune was extremely pleased with it.

Shinpachi’s ayuzushi was made through the painstaking process of washing salt-preserved ayu with sake, then pickling it for around 12 days, removing the rice the day before it was to be served, then adding new rice that had been flavored with sake and salt.

This transformed to the present-day Masuzushi in the late Edo period, when the amount of vinegar was increased. Hayazushi, in which vinegar is added to rice for a quick meal, became popular, and Sakuramasu started to be used instead of Ayu, These factors seem to have contributed to how it transformed into the Masuzushi we see today.

It is made by first filleting fresh Sakuramasu into three pieces and removing the skin and bones, then cutting into 3 mm thick strips. These strips are sprinkled with salt and left for 3 to 5 hours before being washed with a vinegar mixture made of salt, sugar and other seasonings (water is never used for this). The type and amount of seasonings mixed with the vinegar at this time is a secret and determines the house flavor of the restaurant or family. Sakuramasu that has marinated for 1 to 2 hours in the vinegar mixture is placed on sushi rice in the container, then held down with weights to press for several hours to complete the Masuzushi.

Long ago, it was only made with Sakuramasu caught in Jinzu River, so it was made between April and July. However, due to reasons such as a dam being built upstream and water pollution, Sakuramasu produced outside the prefecture and imported Masu (trout) is used now, and it is made year-round.