What is the origin of sushi?

A common theory on the origin of sushi is influenced by the practice of pickling fish (魚の漬物), seen in the hill tribes of South East Asia (some say China’s current Yunnan province) BC. Fish caught during the rainy season were an important source of protein, and a process of natural fermentation mixing salt and rice was devised as a method of preserving it. The lactic acid created during fermentation prevents the fish meat from rotting, and also imbibes it with a very unique and enjoyable flavor. The rice became a viscose slime without any shape so it was removed and only the fish was eaten. It was a luxury item because valuable rice had to be discarded to prepare it.

So when did the pickled fish (the forerunner to sushi) first arrive in Japan?

This pickled fish first traveled from the Chinese mainland to Japan sometime during the Nara era (710-794). There are many descriptions of sushi in the literature of the time. The imperial court accepted various products as taxes, and one of these products was pickled fish. However, because there are no extant documents from before the Nara era, it is not known whether pickled fish was brought over from China, or whether the same dish already existed in Japan, and was given the character 鮓 or 鮨 from the Chinese. Normally we call this “Nare-zushi” (熟れずし; matured sushi). It can also be called “Kusare-zushi” (腐れずし; decayed sushi). It has an intense and complex flavor, very unlike what we would normally call sushi. 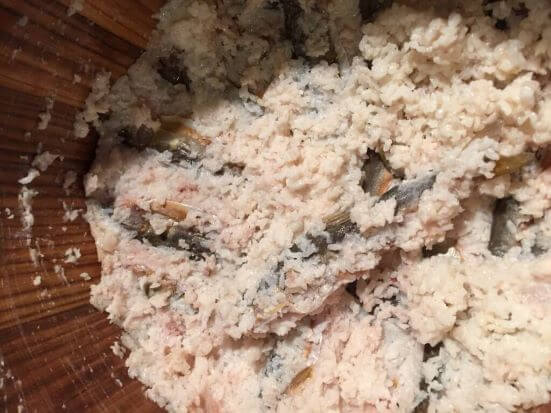 Later Nare-zushi (熟れずし) provided a process that was less about the preservation and more about the delicious taste of the product as a cuisine. In the Muromachi era (1336-1573), we start seeing a practice where the fish is removed earlier in the fermentation process and is eaten with pickled rice. Perhaps someone was just impatient and then realized that it was more delicious when you took it out early, and then eventually they just started eating it raw. It may also have been popular because it didn’t waste rice and had a subtler and gentler flavor than the original Nare-zushi. This sushi is known as “Namanare-zushi” (生成れずし; raw sushi) or “Namanari” (生成). Whereas Namanare-zushi was eaten up to ten days after production, Nare-zushi could be eaten up to a year later.

Between the Muromachi period and the Azuchi–Momoyama period (1573-1603), there were dramatic changes in the daily diet of the Japanese. The cooking method changed from steaming to the current boiling method and a midday meal was added between the morning and evening meals. Moreover, vinegar was created during this period, resulting in a big development for sushi.

Around this time, the sushi rice aspect increased further, and “Ii-zushi” (飯ずし) was born. This type of sushi consisted of funa-zushi, in which carp belly is packed with rice, or fish and shellfish (or dried fish) was placed on rice, and pressed down, like the current “Bo-zushi.” 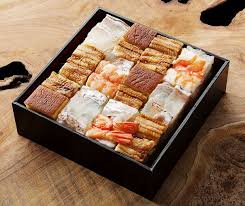 The amount of rice was further increased and the seafood was elaborated on until the flesh was thin and flat, creating “Kokera-zushi,” (柿ずし) which was the predecessor to eventually packing rice into a box and pressing the toppings on top to create “Hako-zushi” (箱ずし).

The above is a very brief history of how sushi came to be.

In the Edo period (1603-1868) an attempt was made to further reduce the fermentation period, and “Haya-zushi” (早ずし; quick sushi) was born using vinegar created separately to produce the acidic flavor. This was done not only so it could be eaten immediately, but because along with changing the acidity from lactic acid to acetic acid and thereby removing the unique flavor from the fermentation, it created a completely different type of food, even though it was still called sushi. 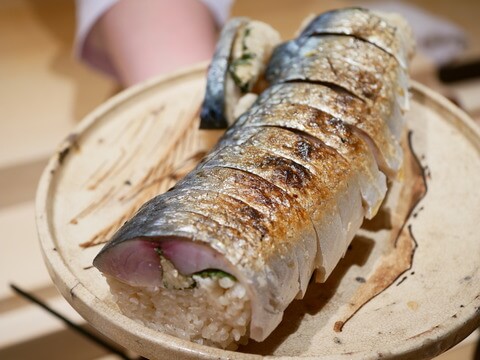 Haya-zushi made using this vinegar spread across the country perhaps both because of the convenience served the customers, and the reduced preparation time served the shops. There are also variations such as Sugata-zushi (姿鮨; fish-shaped sushi) and Bo-zushi (棒鮨; bar sushi) where rice is stuffed into a fish with the head attached, and also Oshi-zushi (押し寿司; pressed sushi) where vinegar rice is packed and pressed together. 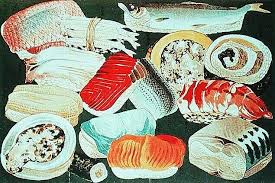 The type of sushi that we now call Nigiri-zushi (握り寿司; hand-rolled sushi) started around 1820 by a man called Yohei Hanaya (華屋與兵衛). He invented Nigiri-zushi with ingredients placed on vinegar rice (however, it is believed that when he first opened, he sold Oshi-zushi like other shops. There is also a theory that someone working in a stall came up with the idea and Yohei polished it into a product to successfully sell in restaurants.) Because there was no refrigeration technology or ice, fish couldn’t be eaten raw and it needed to be treated with vinegar or salt or boiled. The toppings all had to be prepared first. Of course, they weren’t eating raw toppings like we are nowadays.

Amid the post-war confusion, a system of consignment sales (委託販売方式), permitted by GHQ, threw a lifeline for the sushi industry. The concept was that sushi chefs could resume their work if a customer could trade one cup for rice at a sushi restaurant for 10 pieces of Nigiri-zushi, including Maki-zushi. It was a strange business model in this transition period, but the sushi restaurants offered an unexpected pleasure in an uneasy period when the direction of the future was uncertain.

Nigiri-zushi was very popular from the end of the Edo period into the Meiji and Taisho periods, but this was sold as the equivalent to fast food from street vendors and the like. As the calendar turns to the modern age, restaurants were established (in the post-war period selling raw food outside was forbidden for public health reasons) and it was combined with alcohol to become a luxury habit and with that, a strict etiquette was also established.

After the war, refrigerators were becoming common and transportation methods were developing (especially the Toro Box* made out of Styrofoam) which was also used for raw fish, expanding the variety of toppings available. From Nigiri-zushi (握り寿司) eaten at sushi restaurants, Temaki-zushi (手巻き寿司; hand-rolled sushi) made at home became popular, Mochikaeri-zushi (持ち帰り寿司; take-out sushi) was invented, and then there was the great boom of Kaiten-zushi (回転寿司; conveyer belt sushi).

*Toro box: This isn’t referring to maguro no toro or tuna, but originally meant a box containing fresh fish harvested by a trawler. They were once made of wood, but now most are made out of Styrofoam. 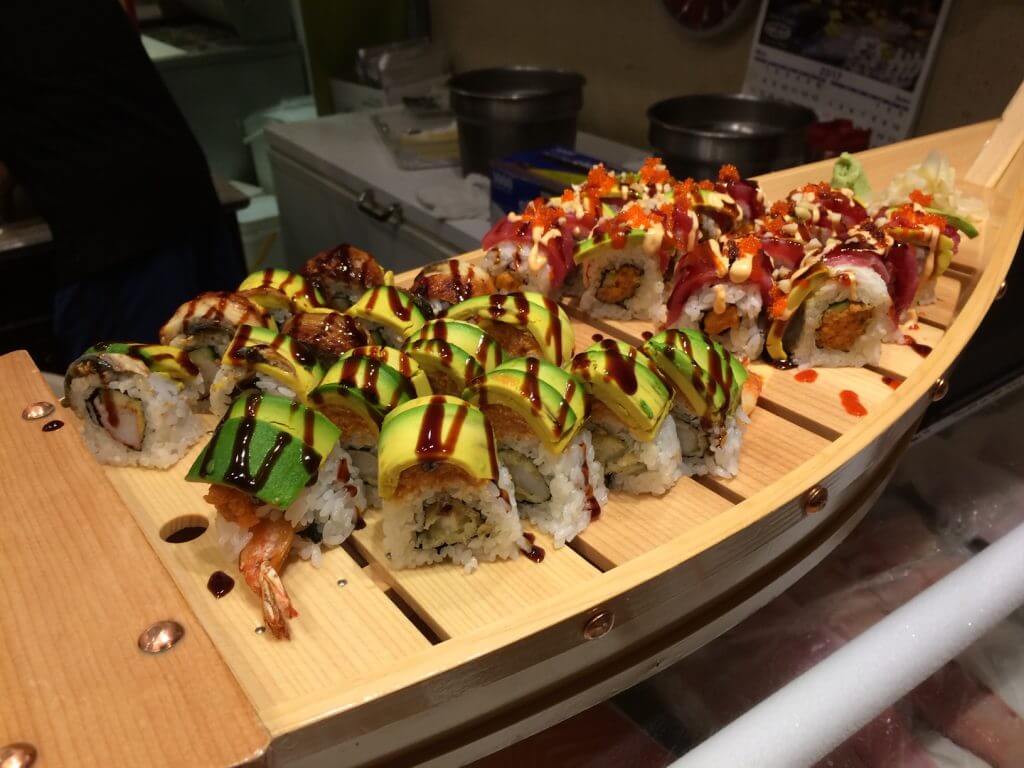 Foodies outside of Japan also started enjoying sushi, and the Californian Roll was created in America and reimported back into Japan. Customers’ tastes change and while there is flexibility in toppings, it was also rated highly for its low calories and healthy nutritional advantages. The Japanese tradition of sushi will continue to diversify and spread further across the globe, developing as it does.