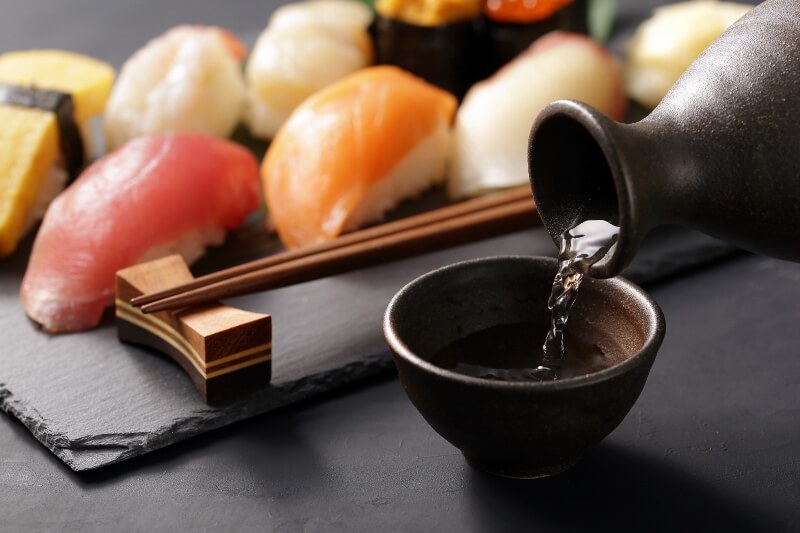 Sake is enjoying a global boom of sorts right now. One of the reasons for this is perhaps that the food culture of Japan has been recognized as a UNESCO Intangible Cultural Heritage, and this has inevitably drawn attention to pairing Japanese sake with Japanese cuisine. However, there are lots of different types of sake, and we think most people aren’t sure which they should drink. So here we will give a basic overview of Japanese sake and then learn which sake you should drink with which sushi.

Generally, Japanese sake is made from rice and water, but it can be divided into two major categories depending on whether extra alcohol is added or not. Sake without added alcohol is called junmaishu. When alcohol is added, it’s called honzojoshu or futsushu (normal sake).

First, there is junmaishu, which can be divided into four types depending on the rice polishing ratio (seimei-buai): Junmaishu, Special Junmaishu, Junmai Ginjoshu, and Junmai Daiginjoshu. Honjozoshu can also be divided into four types depending on the polished rice stage: Honjozoshu, Special Honjozoshu, Ginjoshu, and Daiginjoshu. These 8 types of sake are defined by law and are called “Tokutei Meisho-shu” (specially designated names). And any sake that does not fall into these 8 categories is called futsushu or “ordinary sake.” Let’s take a look at the next characteristic.

Junmaishu is a traditional sake made from rice, rice koji (malted rice)*, and water without any rules defining the rice polishing ratio. It does not use any brewed alcohol so there are many strong types with characteristics such umami and richness.

*Rice koji (malted rice) is where microorganisms, especially mold that is effective in food fermentation, have been seminated in steamed rice.

Special junmaishu is manufactured from white rice at a rice polishing ratio of less than 60%, rice koji (malted rice) and water. Or, it is junmaishu made using a special method.

Ginjoshu and daiginjoshu sakes are extremely rare as they were originally made as entrants in a competitive exhibition. A lot of careful work goes into the production from the selection of the rice used, high-precision milling, making of yeast and yeast mash, all the way to the final preparations. If the rice polishing ratio (semaibuai*) is 60% or less then it is ginjoshu. At 50% or less it is daiginjoshu and you can find variations of both honjozoshu (sake without added saccharides and 120 liters or less seed alcohol per ton) and junmaishu (sake without added alcohol or sugar). The honjozoshu variations are just called ginjo or daiginjo sake, but the junmaishu versions are called junmai ginjo and junmai daiginjo sakes.

* Seimaibuai（精米歩合）: When rice is harvested, it is called “genmai” (brown rice). However, genmai is rarely eaten as it is. Normally, the outside of the rice is scraped off. This is called seimai (polished rice). Most rice that we consume at the dinner table has a polishing ratio of 90%. The index for polishing rice measures how much rice is left. A polishing ratio of 90% means that only 10% of the outside of the rice has been taken off. For sake, more than that is taken off from the outside of the rice. The reason for this is that there are a lot of proteins and fats on the outside of rice. The proteins and lipids are an important aspect of the taste – whether that is bitter or umami – but if it is too much it damages the aroma and taste and often leads to the drinker thinking that the taste is, “zatsumi**.”

**“Zatsumi（雑味）” means that something has been mixed in with the sake, losing the original taste.

Alcohol is added to honjozoshu before the pressing process in order to bring out the fragrance and attain a pleasant balance. The additive amount is always the same and remains within 10% of the weight of the raw rice used. The rice polishing ratio must be 70% or lower. While it is more fragrant than junmaishu, the flavor is clean and refreshing, making it pleasant to drink.

Special honjozoshu is made from white rice with a rice polishing ratio of 60% or less, rice koji (malted rice), water and brewing alcohol so its fragrance and color are particularly good. Further, there are special features to the manufacturing method.

Futsushu (ordinary sake) is sake that uses rice, with distilled alcohol that uses 10% or more white rice, or non-distilled alcohol added as a raw ingredient. Other than Tokutei Meisho-shu (specially designated names), there is everyday sake which accounts for 70% of the market in Japan. Most of the carton and cup drinks in supermarkets and convenience stores are futsushu.

When drinking sake alone, the most important thing is taste and fragrance.

In general, if the emphasis is placed on fragrance, then the lower the rice polishing ratio, the better the fragrance. If the polishing ratio is at the 60% level or lower, then it is kinjoshu. If it is 50% or lower, it is daikinjoshu, so it is possible to understand what is what by its name.

Next, you can check if it will be a dry or sweet taste depending on the “sake meter value” (SMV) on the label. Simply put, the value shows the amount of sugar in the sake with a positive or negative number. The greater the sugar content, the sweeter it will taste. Lower sugar content will make the taste seem drier. If the sake level has a higher sugar content, it will be marked with a negative number. If there isn’t much sugar, it will be marked with a positive number. The SMV of the majority of sake in circulation is between 0 to +5, so you can see that most sake has a bit of a dry flavor.

Just like SMV, the “acidity” is another important element that affects taste. This is also indicated on the label. The acidity indicates the lactic and succinic acid content, and the taste changes depending on their amounts. A higher acidity, “1.8 or higher,” will be richer while a lower acidity of “1.4 or lower,” will have a lighter taste (tanrei). So when trying to determine the taste of sake, you need to consider both the SMV and the acidity.

What sort of sake should you pair with your sushi?

The first step is to match with the umami of the topping and the acidity of the shari. Remember that sushi is the main dish, so a more subtle sake is recommended. This will allow you to focus on the sushi and stick to only one sake for the entire meal. If the Japanese sake is too fragrant, it will overshadow the taste and flavor of the sushi so we recommend a dry Junmai sake. Refreshing, crisp, dry (tanrei dry***) Junmai Ginjoshu sake without a strong fragrance is considered to be the best fit for all sashimi and sushi. It can’t be reiterated enough that sake that is too fragrant, especially Ginjoko, which is rich in ethyl caproate****, generally does not go well with sushi.

***”Tanrei（端麗）” is a Japanese word that can mean smooth, refreshing, clean, light, crisp and dry.

Scientifically, the reason that Japanese sake goes well with sushi is that Edo-style sushi is composed of multilayered umami flavors including acetic acid, glutamic acid and inosine acid. It is said that supplementing this sushi with organic acids specific to Japanese sake such as succinic acid, malic acid and lactic acid remarkably expands on the umami flavor.

Finally, I would like to offer some brands of dry junmaishu and refreshing dry junmai ginjoshu that are good with sushi. Those kept in the restaurant are carefully selected so please use them as references.