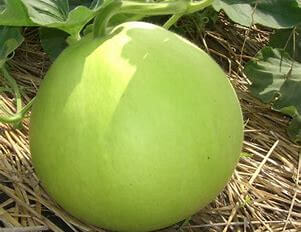 Once the Cucurbitaceae plant blooms with white-flowered gourd, large white fruit is produced called “Fukube” from the end of June to the end of August. It can be up to 35-40 cm tall and weigh between 7-8 kg. This “Fukube” is harvested and then it is made into long, thin strips, as if peeling the skin. These are then dried in the sun or with hot air to make Kanpyo. It is a specialty of Tochigi prefecture which accounts for 90% of Japan’s production. 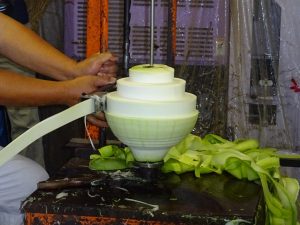 The green outer skin is peeled, leaving only the seed in the center of the fruit, which is cut thinly into pieces that are 3-4cm across and 2m long. In order to cut it with an even width all the way through, the blade is placed on a surface and it is rotated to peel off the skin. 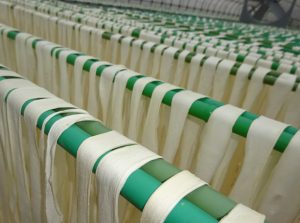 Why is it called kanpyo even though it’s made from white-flowered gourd?

The fruit of the white-flowered gourd or “fukube,” is written with the 瓢 character, which can also be read as “pyo.”

“Kan” (乾), the character for “dry” is added to make the word 乾瓢 which could also be written as 干瓢 using the character 干, which means to leave something out to dry. 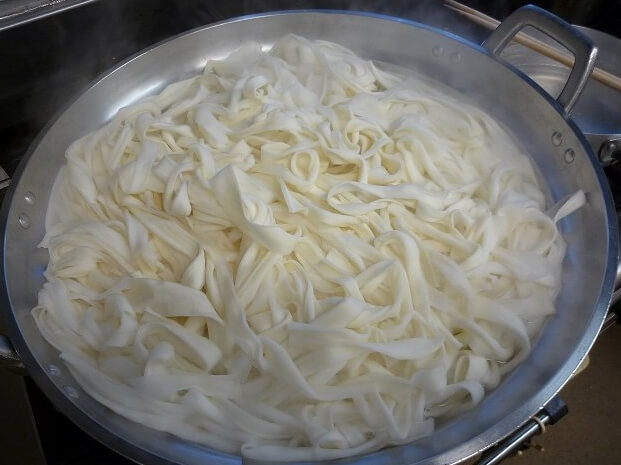 The dried kanpyo is cut to the width of seaweed and immersed temporarily in water. It becomes more flexible after being soaked in water overnight. The water is discarded and then it is rubbed with salt until it is soft. It is then rinsed with water and placed in a pot with plenty of water and at high heat. It should be boiled until pressing your nail into it will leave a mark. Next, it is dipped in water, then the water is squeezed out just enough so the kanpyo isn’t damaged, and placed in a bamboo sieve to remove excess water. 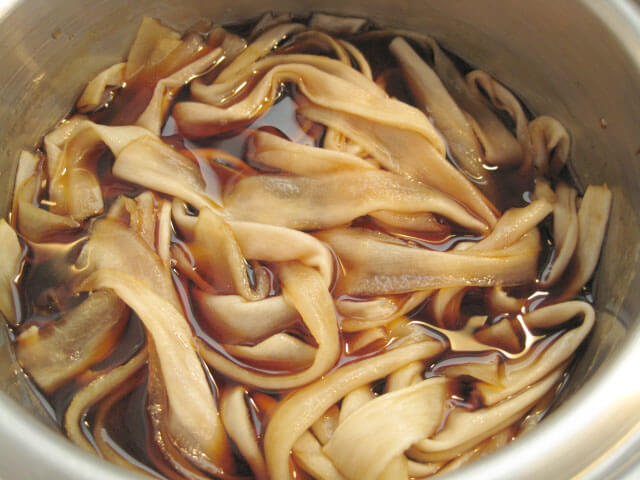 Next water is placed in the pot and heated. Brown sugar is added and once dissolved and the water comes to a boil, soy sauce is added. Once it is boiling again, the kanpyo is added. It is boiled down until there is not much liquid left and the flavor has soaked into the kanpyo. After boiling, it is placed in the bamboo sieve again to cool so it doesn’t overcook. Now it’s ready!

The dietary fiber content is 30.1 g per 100 g of kanpyo, and this is approximately 3 times the amount of that in almond, which has a reputation for high fiber, and 8.6 times that of pumpkin. As you know, dietary fiber supports the intestinal function.

Kanpyo contains more calcium than dairy products and seafood. In addition to the benefits for bone development and the prevention of osteoporosis, calcium can also prevent irritation. Calcium and magnesium are absorbed most effectively when taken at a ratio of 2:1. The calcium and magnesium content in kanpyo is approximately at this perfect balance of 2:1.