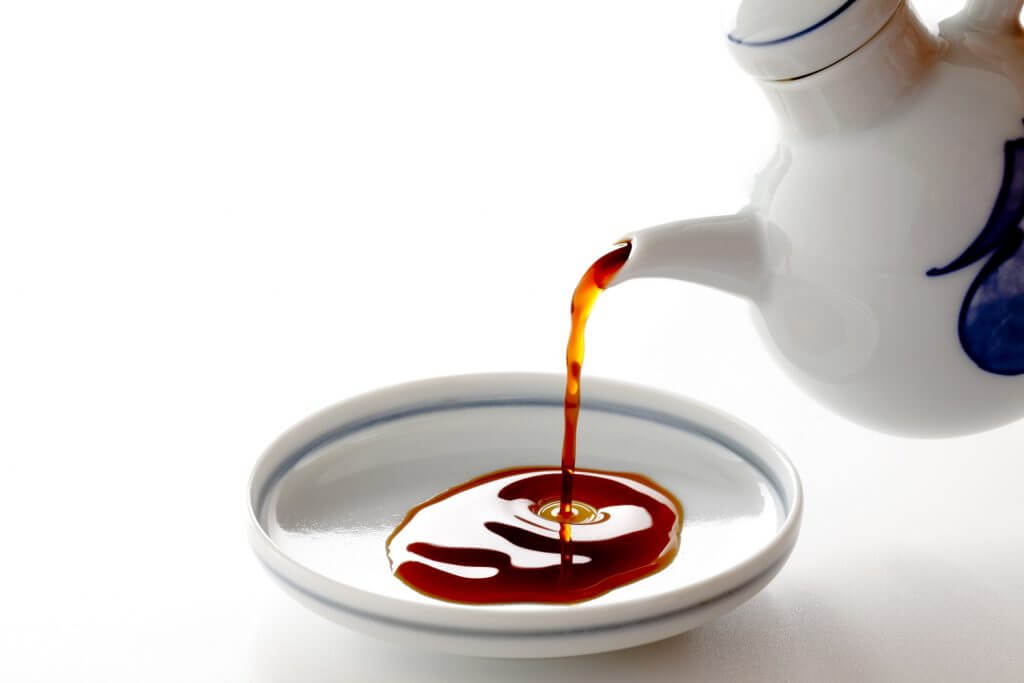 Soy sauce is an indispensable part of Japanese cuisine. It transforms strong tastes into smooth tastes and eliminates strong odors, extends the shelf-life of foods, is easy to use, and can come in handy. We’d like to introduce its charms here.

Open the lid of the soy sauce and smell. It has a nice smell that isn’t easy to describe. It may surprise you that soy sauce has over 300 fragrant components. Some of those include roses, hyacinths and other floral fragrances, fruit aromas such as peaches and apples, and the same aroma as almonds, coffee, or vanilla used in ice cream or cakes. You might say it is a treasure trove of flavors. It makes sense to call it a nice, sweet aroma.

This distinctive aroma is made during the fermentation process and can’t be made chemically. The fragrant components are made from the fermentation of aspergillus (koji mold) during the maturing of the Moromi (mash). The aroma gets especially strong during the heating process*, which is also when the color darkens. Therefore, a strong heat is used for Dark soy sauce, creating a strong aroma. The heat is reduced for Light soy sauce for a more subtle aroma.

*The heating/pasteurization process is primarily used for sterilization, but heating raw soy sauce also makes the odor, flavor and aroma of the soy sauce and blocks the enzymes, stabilizing the quality.

Soy sauce encompasses the five basic tastes of sweet, sour, salty, bitter and umami and is a well-known seasoning by chefs all over the world. The five types of soy sauce include Dark, Light, Tamari, Twice-brewed and White soy sauces.

Let’s take a look at the production, use and flavors of each individual sauce.

Dark soy sauce is what you typically imagine when you think of soy sauce. Made in various areas of Japan, the distinguishing characteristics of the soy sauce, such as taste and manufacturing process, differ depending on the locality. The manufacturing process consists of combining nearly equal parts steamed soybeans and roasted wheat, then adding aspergillus to create malted rice. This mixture is fermented with a salt solution to make unrefined soy sauce or “Moromi” and then it is allowed to rest for 6-8 months. In the fermentation process, the soy protein and the carbohydrates of the flour are broken up from the function of the koji-mold, yeast and Lactobacillus. Raw soy sauce is then squeezed from the Moromi. The raw soy sauce is heated (this process is actually similar to the pasteurization of milk) and once the sediment is removed, you have dark soy sauce. The salt content is approximately 16%. Over 80% of it is produced domestically in Japan.

The main production areas are Chiba, Hyogo, and Aichi prefectures.

Usukuchi literally means “light taste,” but this doesn’t mean that there is less salt, instead it means that the color is lighter. In fact, it can have up to 2% more salt than dark soy sauce. The salt content is approximately 18%. Approximately 13% of it is produced domestically in Japan.

The main area of production is Hyogo.

Tamari soy sauce is said to be the origin of soy sauce in Japan. It refers to the liquid separated during the manufacturing process of soybean miso produced in Aichi, Gifu, and Mie. Compared with Dark soy sauce where there are equal amounts of soybeans and wheat, tamari soy sauce is only soybeans with little or no wheat added. It has a characteristic rich color and flavor. Only 2% of it is produced domestically in Japan.

Twice-brewed soy sauce is also called sashimi soy sauce. As its name suggests, more rice malt is added to a batch of initial soy sauce and the brewing process is performed again. It takes almost double the ingredients and time to make compared to Dark soy sauce. Because of the richness of color, flavor, and scent, it is also known as kanro soy sauce or honeydew soy sauce. Approximately 1% of it is produced domestically in Japan.

Primary production is in Yamaguchi Prefecture.

White soy sauce is used as a secret ingredient in high-class cuisine. Its color is paler than Light soy sauce, like beer, and it has more sugar content than other types of soy sauce. More wheat is used than soybeans when making it, and the wheat is steamed and the soybeans roasted to make the Moromi, which is the opposite of dark soy sauce. White soy sauce is generally not heated. The shelf life is short and as time passes the color darkens, so try to use it up soon after opening. Less than 1% of it is produced domestically in Japan.

The main area of production is Aichi prefecture.

Effects of soy sauce to keep in mind

Soy sauce gets its odor-eliminating effects from the mechanism of methanol, which is created by altering methionine, an amino acid. This effect is used to eliminate the odors of fish or meat.

Heating causes a Maillard reaction in the amino acids, mirin and other sugar content in soy sauce and an essence called melanoidin is created, generating a scent that stimulates the appetite.

Soy sauce contains a moderate amount of salt, alcohol, organic acids, etc., so it is effective in deterring the growth of E. coli and other bacteria.

For example, if a bit of soy sauce is added to something sweet, like caramel, the sweetness will get stronger from the contrasting effects of the salt in the soy sauce, exerting its excellent effects as a secret ingredient.

When soy sauce is added to extremely salty dishes, it can suppress the flavor. This phenomenon occurs because of its ability in the organic acids in the soy sauce to temper the salt content.

How to use soy sauce in a healthy way

Use it to reduce sodium intake

What is the best way to store soy sauce?

Soy sauce can be stored for a long time without spoiling if the lid hasn’t been opened. If it’s packaged in a plastic container, it can be kept for a year to a year and a half if it’s stored out of direct sunlight in a cool place. Once you’ve opened it, try to use it within about one month. Once the bottle is opened, the color of the soy sauce gets darker and darker due to oxidation. This is one of the causes of worsening color and smell.

Sometimes it even gets a white mold-like substance after a number of days have passed. This is a kind of yeast, and it isn’t harmful, but this unique yeast odor overtakes the nice aroma of the soy sauce. Make sure to adhere to the following.

Particularly since low-salt soy sauce, has a low sodium content, place it in the refrigerator after opening.

Are you using the right amount of soy sauce on your sushi?

Westerners consider sushi to be a portion of healthy food. It’s become popular from wariness that too much meat and dairy intake can lead to obesity caused by excessive fat and cholesterol intake, which can, in turn, lead to a lifestyle-related disease, and a preventive medicine idea that the fat of fishes and shellfish suppress accumulation of cholesterol in the blood.

However, most people eat sushi with a lot of soy sauce. On the contrary, too much salt intake raises blood pressure. The preferred acidic rice in Western countries is slightly sweetened and perhaps calls for more soy sauce. Of course, there are many people in Japan who eat their sushi with a large amount of soy sauce too.

So we asked a famous sushi chef how much soy sauce should be used with a piece of sushi. He said, “Of course everyone’s preference is different, but putting just a small amount of soy sauce on the sushi topping and then eating that topping and the vinegar rice in one bite allow the soy sauce to bring out the sushi flavor.” Just for your reference.

What is the nikiri soy sauce used in sushi restaurants?

How is nikiri soy sauce made?

Tamari soy sauce is generally preferred as the base for nikiri soy sauce (boiled down soy sauce) in Kansai and in Kanto Dark soy sauce with red transparency. It’s made by boiling sake and mirin and burning off the alcohol. Bonito soup stock and a few types of soy sauce are added to this, then brought to a boil. When it cools, the finished product is a nikiri soy sauce that enhances out the taste of mild-flavored sushi.

Gluten-free products started as medical diet foods so that people with wheat flour allergies or Celiac disease wouldn’t accidentally eat wheat flour. In addition to that, in the west, there are many people who used to eat wheat flour regularly and have stopped. Many of these people believe that eating gluten makes them feel unwell in some way or another. Food that doesn’t contain wheat flour or “gluten-free” products has gained quite a bit of attention from a health and beauty perspective.

What shoyu (soy sauces) are preferred by famous sushi restaurants?

In 1864, the end of the Edo period, the Edo shogunate ordered a reduction in the price of soy sauce in order to control inflation. However, the title “Premium Shoyu” was given to seven brands of exceptional quality and these brands were exempt from the price reduction. Kikkoman shoyu, Yamasa shoyu and Higeta shoyu are three of those brands that were granted special status.

In the Kansai region the stronger Tamari shoyu is preferred, while in Kanto Koikuchi shoyu with a reddish transparency is preferred. Meanwhile, Satou shoyu is preferred in Kyushu and Saishikomi shoyu in Oono. In other regions it’s not common to mature sushi toppings, so the chewy texture is prioritized over umami. In such cases it’s only natural to choose Tamari shoyu and Saishikomi shoyu, which have high amino acid and umami content. There are also chefs who use pure shoyu as-is, and don’t bother making nikiri shoyu so as not to disturb the innate flavor of the shoyu.

Edomae sushi chefs pay attention to three conditions of shoyu: color, flavor and aroma. Based on past results, Yamasa shoyu is the first choice that meets these conditions. The majority of Japanese restaurants in Kanto and nearly 70% of Tokyo sushi restaurants use this brand, making it the choice of professionals. According to sushi chefs, the nice red color does not hinder the appearance of nigiri sushi and it brings out the fresh aroma as well as the rich umami of tuna. Shoyu is not actually black, but a pretty color that can almost be called red.

Higeta shoyu has risen up in its own right to challenge Yamasa shoyu. After thorough research of the best parts of Yamasa shoyu, a new product called Honzen was born. Honzen has a pretty, brown transparent color and a refined but robust aroma. When you put a piece of Nigiri sushi that uses this shoyu in your mouth, you don’t feel the persistent saltiness and instead you are filled with a rich, full-bodied flavor.

Where should soy sauce be applied to the sushi?

Why is sushi eaten with sushi sauce (shoyu)?

Is it polite to use Gari as a brush to apply soy sauce?