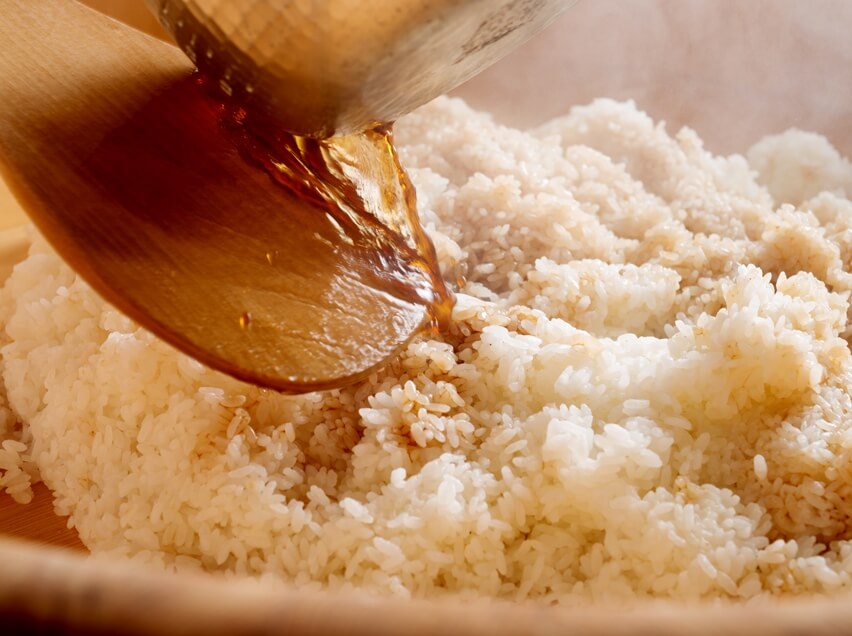 Vinegar has been around for ages, and records from 5000 B.C. Babylonia shows that things like dates were used to make it. It was around the 4th-5th centuries that vinegar started to be made in Japan. The technology for making vinegar was brought over from China, along with the technology for brewing sake, and from then it was made in the region that we now know as Southern Osaka.

Here, I would like to introduce the types of vinegar according to the regulations of the Japanese Agricultural Standard (JAS), and explain the knowledge that you should acquire after that. The second half of this article describes vinegar as the most important seasoning for Edo-style sushi, which drastically changes the flavor of the sushi drastically as part of the shari, pickled ingredients, etc. This is your opportunity to gain a deeper understanding of vinegar, with a focus on the vinegar used by sushi restaurants.

According to JAS regulations, vinegar is divided into two categories known as “brewed vinegar” and “synthetic vinegar.” Brewed vinegar is made by first performing alcohol fermentation on a carbohydrate or starch, and then following with acetic acid fermentation. Synthetic vinegar is made by diluting glacial acetic acid made from petroleum and limestone, and adding several food additives such as glutamic acid, succinic acid, and artificial sweeteners. It was used in times of severe food shortages, and it’s very hard to find nowadays.

First, let’s take a brief look at the 10 most typical types of vinegar.

If the amount of rice is at least 40 g per liter of vinegar, it is called rice vinegar, even if other ingredients are used. Rice vinegar has a unique sweetness and mellow taste combination of rice. It’s optimum for tasting the vinegar flavor.

When the only major ingredient used is rice, it’s called pure rice vinegar. This moniker requires that at least 120 g of rice per liter of vinegar is used. Pure rice vinegar has good umami and an even better flavor. The higher the rice content, the richer the flavor of rice vinegar.

There is also brown rice vinegar, which is made from rice that hasn’t been polished. Because it is brewed without removing the germ, it has more nutrients than normal rice vinegar, the flavor and fragrance are more robust, and the color appears to be brown. Therefore it is also called black vinegar. It has between 5 to 20 times the amount of amino acids as normal rice vinegar.

This is also known as red vinegar (Akazu). Sake lees vinegar has been made since the end of the Edo period and is unique to Japan. It is made from Sake lees, which has been aged for a long period of time in order to increase the umami aspect, and it is used in the red shari that is often used in Edo-style sushi. It has about double the amount of amino acids of rice vinegar, which are the source of the umami flavor.

Wine vinegar is made by first squeezing grapes to make wine, then fermenting it. It is a staple of western cooking. There are both white and red wine vinegar varieties and this vinegar has a strong fragrance and rich flavor.

Like wine vinegar, apple vinegar must be made by fermentation and contains at least 300 g of fruit juice per liter of vinegar. It has a refreshing apple aroma and a fruity taste. Using apple vinegar with salty foods softens the sharp taste of the salt.

Apparently, balsamico is an Italian word that means “fragrant”. The grape juice that balsamic vinegar is made from is compressed and the juice is boiled down. This is put into a wooden vat and aged for a long time. The fragrance of the wood is infused in the balsamic vinegar in the aging process, and it has a unique fragrance just like the name suggests.

Malt vinegar is made from barley, wheat and corn, in which the barley malt is used to convert them into sugar, which is why it is called malt vinegar. It is the vinegar generally used in England. It tastes like a beer that has been made into vinegar without the bitterness of hops and has a unique flavor and fragrance similar to beer.

The following are seven effects that vinegar has in cooking that you should remember. Sushi is a great example of how these effects are used skillfully.

Vinegar has the effect of bringing out the flavor of salt, so when used in cooking, sufficient salt flavor is possible even if the amount of salt used is reduced. Therefore, salt content can be reduced by using vinegar and salt together.

The flavor of vinegar has the effect of making the dish light and refreshing. It also wraps the fat of meat and fish in a refreshing flavor. It also brings out the flavor of the ingredients.

The volatility of vinegar enhances fragrance so vinegar refreshingly brings out the fragrance of ingredients. Furthermore, pairing ingredients with a certain type of vinegar can create wonderful fragrances.

When cooking with ingredients that have strong smells, vinegar envelopes the smells and mediates them to make a more mellow smell. It suppresses pungent odors and brings out the umami and richness of the ingredients.

Vinegar is extremely permeable in ingredients. Therefore, even though vinegar has a lighter taste, it soaks into the ingredient and also has the effect of adjusting the flavor. Especially in dishes where meat is boiled, the vinegar gives the meat a deeper layer of flavor.

The acetic acid of vinegar has bactericidal effects. Therefore, when permeated by vinegar, the ingredients can be stored for a longer period of time. Pickles are a good example of this.

Now I would like to explain the production methods and characteristics of rice vinegar and red vinegar used by sushi restaurants.

Rice vinegar (米酢), as the name suggests, is made from rice. The process starts by washing and steaming the rice, making malted rice, preparing the mash (moromi) and making sake. When acetic acid bacteria is added to this sake, a thin film forms on its surface, indicating the start of the acetic fermentation. It is then left to ferment for several months by the standing fermentation method in which leaves the liquid to ferment according to the natural convection current. Or, the air is fed in while swiftly stirring, known as the fast fermentation method, in which rice vinegar can be made with just a few days of fermentation. When rice vinegar is used, the shari is white. Since rice is the source ingredient, the aroma is pleasant and it is characterized by its mellow sweetness.

On the other hand, the source ingredient of red vinegar (赤酢) is only sake lees. It’s the sake lees that is leftover after straining Japanese sake. These sake lees are placed in a wooden vat (or a metal tank) and it is aged for several years at room temperature. This turns the formerly white vinegar to a dark black color due to the Maillard effect (browning due to the reaction of the sugar and amino acids). Water is added to this, where it is dissolved, then filtered and acetic acid bacteria is added to the filtered liquid before aging it, before fermenting it for several more months and aging it for several more months after that. Finally, it is mixed, filtered and sterilized to create the finished “red vinegar” product. When this vinegar is used to make shari, it gives the rice a red color, which is why it came to be called red vinegar. It is characterized by having an acidity that is milder than normal rice vinegar (due to the lower content of diacetyl, which is a type of unpleasant odor) and its strong umami aspect.

Why did the vinegar used in shari switch from red vinegar to rice vinegar?

Vinegar, as an essential ingredient of Edo-style sushi, was rice vinegar in its earliest form. Later, red vinegar was used, invented by Matazaemon Nakano (中野又左衛門), the founder of Mizkan. That means, when sushi started booming in the Edo period, the shari was red. Since rice was such a valuable commodity, vinegar made from the rice was unattainable for commoners, so as an alternative, cheaper vinegar (red vinegar) made from sake lees was distributed among commoners.

At the time, the traditional Edo-style method of making sushi was used, making it from only red vinegar and salt, without using sugar. However, currently, rice vinegar is used, and it’s common practice to mix sugar, as well as salt with the vinegar.

The reason is an incident in which some of the rice imported to Japan in 1952, turned yellow due to the proliferation of a harmful mold, becoming what’s known as yellowed rice. The uninformed public brought the red shari into the commotion. Compared to shari made with rice vinegar, shari made with red vinegar has a brown tint to it, so there were many people who caused a fuss, saying it must be yellowed rice. It went beyond that with many people making absurd complaints to sushi restaurants. In the end, most sushi restaurants switched to rice vinegar to quiet down the fuss. 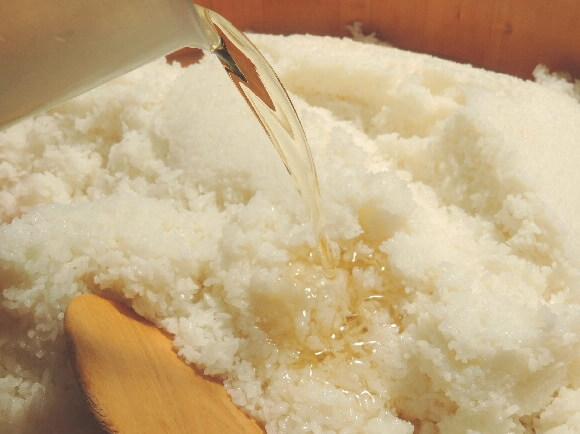 Another reason is that after WWII, sake lees became harder to come by, but the shift in consumer preference was the bigger issue. With help from the rumors of yellowed rice, the faith in white rice was born. That was when sushi entered the “silver shari” era where shari made with white rice was now preferred over shari made with red rice. As if to back that up, according to agriculture, forestry and fisheries survey, red vinegar only makes up 1% of all brewed vinegar. Now, most sushi restaurants use rice vinegar.

Is rice vinegar or red vinegar more suitable for shari? 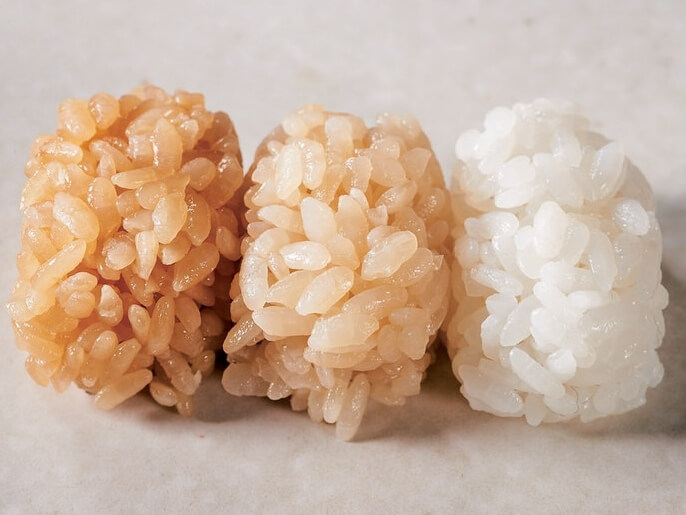 In the past 10 years or so, some sushi restaurants are known to be exclusive have started using red vinegar for their sushi. The red vinegar peculiarly enhances the flavor of the shari. However, setting aside lean tuna and boiled toppings (like conger eel and Nihamaguri) with distinctive flavors, doesn’t necessarily go well with delicate toppings such as white fish and squid. The strong flavor of the red vinegar must be countered, and efforts must be made to deepen the tasting of the topping. For example, increasing the umami of a shellfish by aging it. Using a butcher knife to cut in a way that makes the flavor more obvious. It takes a lot of trial and error to determine the right shari and topping temperatures, and what rice to use. Depending on the chef, they may use a blend of red vinegar and rice vinegar, or use each separately depending on the toppings. Also, almost all the sushi chefs I have asked said that they eventually change to original vinegar rice that differs from where they spent their long apprenticeship. To put it simply, there is no one right way to do it.

Apparently, there are over 100 vinegar manufacturers in Japan. The following are the manufacturers preferred by most famous restaurants.

The contents will be ready soon. Please check back again soon.