When someone says the word “salt,” he could be referring to any one of many types of salt throughout the world. It is a very familiar item that most people probably think they know about, but there are a surprising amount of misunderstandings when it comes to salt. The salt differs depending on the raw materials and devices used in manufacturing, manufacturing process, manufacturing so there is a very wide variety of classification methods. If we go into too much detail it will get more confusing, so let’s just take a quick look at the raw materials and we will explain the manufacturing methods you should know.

Sea salt can be classified by how it is manufactured. 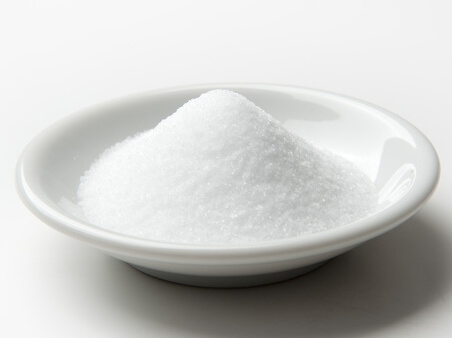 Strong saltwater is made by using an ion-exchange membrane with seawater as the raw ingredient. Next, it is boiled down in a vacuum evaporator (tategama)*. This is an efficient way to make salt. With this method, the grains of salt are shaped like dice and characterized by how it’s free-flowing, like dry like sand. It isn’t affected by weather so the salt can be produced stably and in large quantities all year long.

*A vacuum evaporator (tategama) is a piece of equipment in which sealed tanks are connected and the steam generated in the tank is reused while effectively boiling down the salt.

This is made with solar salt as the raw ingredient, usually imported from Mexico or Australia. To make solar salt, water is concentrated using solar heat and wind power, then crystalized, so dirt and sand may be mixed in with the salt. Therefore it is dissolved in water once to remove the dirt and sand, then boiled down in the vacuum evaporator, regenerating the salt crystals. 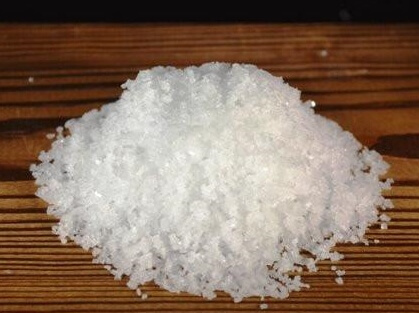 The typical natural sea salt is solar salt. Seawater is drawn to a salt farm and salt crystals form by evaporating the moisture using solar heat and wind, so only natural forces are used.

**In the past, in order to increase the price of salt and increase originality, the words “shizen-en” and “tennen-en” were used (both meaning “natural salt”). However, in 2008 rules were established regarding salt labels and terms like “shizen-en,” “tennen-en” and similar terms were outlawed. 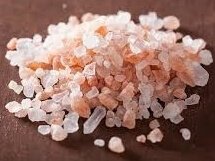 If we trace it back, this salt also originates from the sea, but a stratum in which seawater was trapped bulged out due to crustal movement, etc., and over millions of years the seawater evaporated, became concentrated, and crystallized, fossilizing the seawater in a way. There are two methods of production here, one is mining the salt and then crushing it into powder, and the other is to pour fresh water into the underground rock salt to create dense saltwater, then draw the water up aboveground and boil it down. This type of salt is mainly produced in the Himalayas, Mongolia, Poland, etc. 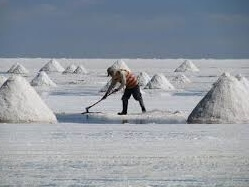 When seawater is trapped due to crustal movement, etc., then the moisture evaporates and the salt content in the water becomes more concentrated, it’s called a salt lake. Lake salt is made by further evaporating that dense saltwater, then crystallizing the salt content. At some salt lakes, during dry seasons the lake water naturally dries up and salt crystals appear. The Dead Sea on the border of Israel and Jordan, Salt Lake City in North America and Salar de Uyuni in Bolivia are famous salt lakes.

Effects of salt in cooking to keep in mind

Salt has dewatering effects in which it brings the moisture in food outside of the item and in its place the salt content is permeated. This effect is utilized in various processes in cooking such as removing fish odors.

Prevention of Oxidation and Discoloration

The reason the cross-sections of apples and potatoes that have been peeled turn brown is because the epigallocatechin (a polyphenol substance) and chlorogenic acid (a tannin substance) oxidize due to the oxidizing enzymes, ending in them changing to brown-colored protein. Salt has the effect of preventing that discoloration.

The dressing salt applied to the back fins and tail of grilled, whole fish is not only to make it more appealing once it’s finished, but it also prevents the fins and tail from burning.

It has the effects of controlling bacteria function and enzyme function that is the cause of food rotting, so adding more salt to food can improve the preservation of food. If the saltwater is 10% or more salt, it dehydrates the moisture in the food and can suppress bacteria growth. This has been used since long ago to preserve food.

When purging sand from shellfish, shells are put in saltwater with the same concentration as seawater (3.5%), and they are put in a dark place. At this time you want the shells to breathe, so the saltwater is just high enough for the shellfish to be barely submerged. The closer the saltwater is to the habitat environment of the shells, the better their respiration, so the sand purging will be more active if there are minerals in the water, like there is in the sea.

When there are two types of tastes and one enhances the other, it’s called a contrast effect. On the other hand, when one of the tastes suppresses the other taste, it’s called inhibitory effects. When salt is put on watermelon, it brings out the sweetness due to the contrasting effects of the salt. The reason salt is added to the vinegar in vinegar rice, is to use the inhibitory effects of the salt to weaken the sourness.

What kind of salt is used at sushi restaurants?

Salt is as important an ingredient in sushi as vinegar is. Special, natural salt is always used in sushi. One characteristic of this kind of salt has not only sodium, but also trace amounts of various minerals including potassium, calcium and magnesium. Types of natural salt include that made from seawater or lake water or rock salt and each sushi restaurant selects the type of salt they use carefully.

There is an amazing variety of salt selected by each sushi chef based on how well it goes with his own toppings and shari (vinegar rice), and just like vinegar, some restaurants create their own blend of salt. So let’s take a look at a few.

Mongolian rock salt is characterized by containing calcium and potassium minerals instead of the magnesium that is normally found in salt, so it is popular as a salt that doesn’t cause acridity***. For example, when it is used on a fatty topping such as fatty tuna, it brings out the flavor of the topping, just enough.

***Acridity is the unpleasant feeling that spreads through your mouth like your tongue and throat are aching. 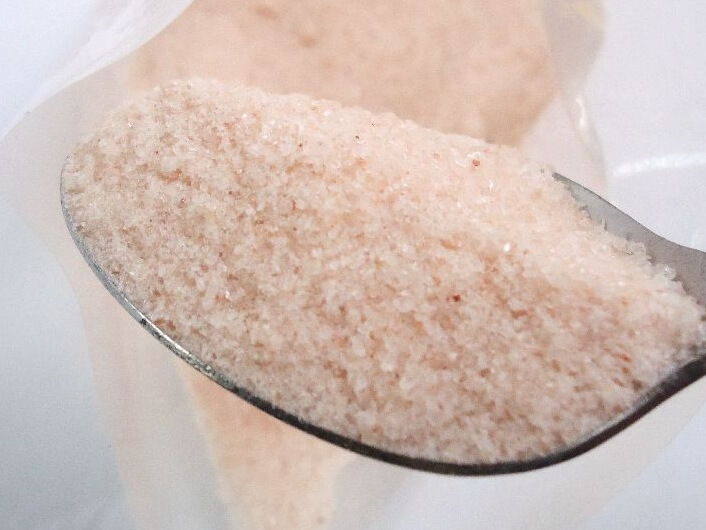 This salt has a faint pink color. It has 10-20 times the mineral content as normal salt so it can be used as a supplement for calcium and iron deficiencies. It doesn’t have the strong saltiness specific to rock salt or a unique kick, so it goes well with sushi toppings.

This salt is crystallized naturally at the bottom of the Dead Sea, which is said to have a salt concentration of 7-8 times that of seawater. It is often used for cosmetics and bath salts so you don’t usually think about Dead Sea salt as a seasoning for food, but it enhances the flavors of ingredients and leaves a refreshing aftertaste.

This is one of the rare, completely solar salts in the humid climate of Japan. It takes approximately 1 month in the summer or 2 months in the winter to become salt. The characteristics are a robust sweetness and an extremely strong savory flavor. 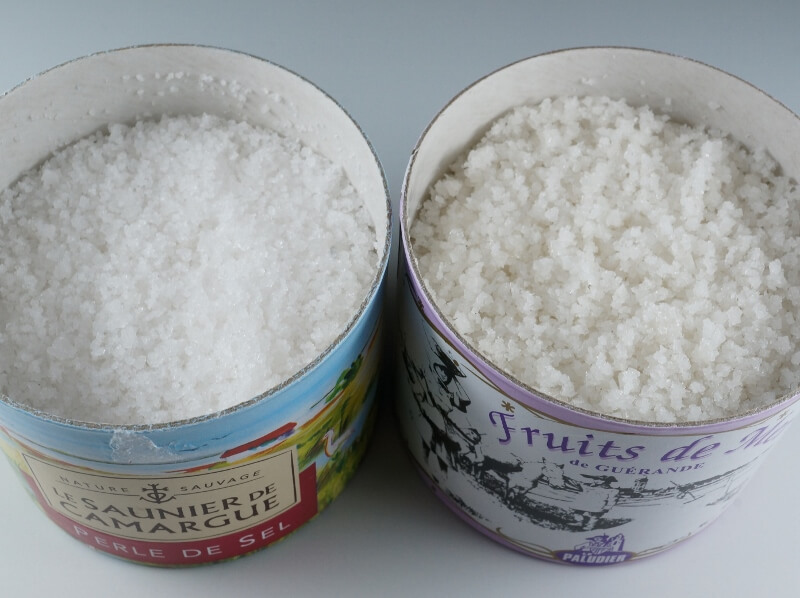 In the town of Guerande, located on the southern part of the Brittany peninsula, there is a large salt farm and the farmers have been making salt there using the traditional method for many generations. It’s known for its strong salty flavor and richness.

This salt is manufactured from seawater from approximately 2000 m offshore of Itoman city in Okinawa. It has a strong “zatsumi” (off-flavor), but it has a balanced flavor. 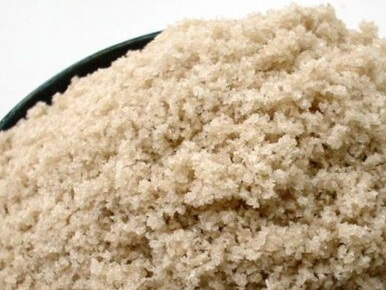 This is a type of sea salt. Sargassum and other seaweed is harvested from the ocean, dried in the sun, then firewood is used to slowly boil it down in a pot, letting it crystallize, which makes seaweed salt boiled down iodine components. It is a brown color with black spots. Its distinguishing characteristic is that the aroma of the seashore spreads through your mouth, and it gives seafood richness.