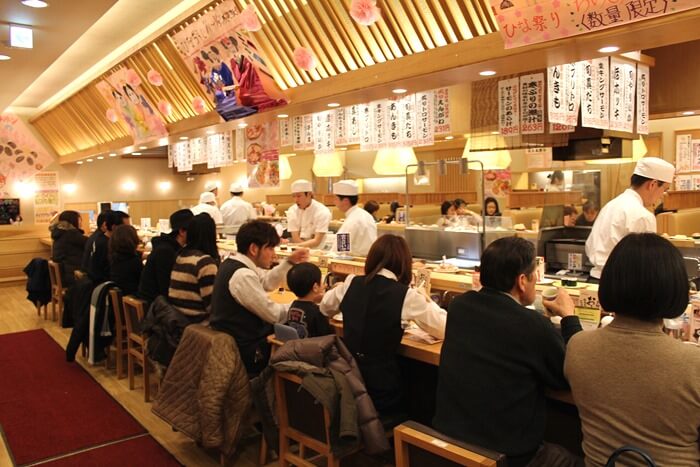 Kaiten-sushi (回転寿司 or conveyor belt sushi or Kaiten sushi) is a popular way to enjoy a wide range of sushi toppings at reasonable prices in a casual environment where the whole family can relax. Its roots were established in 1958 when Mr. Yoshiaki Shiraishi, who ran a standing sushi restaurant, was inspired by a conveyor belt he saw in a beer factory. He invented a conveyor belt for sushi (kaiten sushi) and obtained a patent.

In 1970, kaiten sushi appeared at the Osaka World Expo to great acclaim, earning it a huge amount of publicity. For the first time it met the needs of convenience, simple billing, and providing low prices compared with the more traditional luxury of a typical sushi restaurant of the time.

Then, in 1978 new players entered the market when the original machine patent expired.

In 1991, Genki Sushi made an offering of stock to the public – the first in the sushi industry. That same year “kaiten sushi” was entered into the Japanese dictionary.

As we entered the 21st century, there were two types of major suburban kaiten-sushi restaurants; those offering kaiten sushi plates at 100 yen, as well as more “gourmet” style kaiten sushi brands offering plates for a few hundred yen.

Since the Lehman Brothers shock in 2008, the rise of major chains in the kaiten sushi industry has been spectacular. In particular, there are four companies dominating: Sushiro, Kura-sushi, Hama-sushi, and Kappa-sushi. 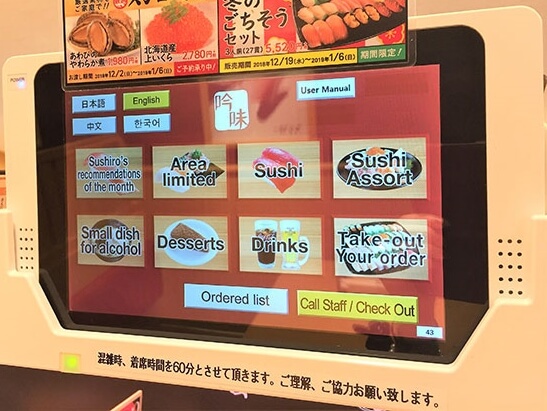 In recent years, unique features have been introduced such as touch-screen ordering (see the image on the right) and reservation apps, establishing a whole new genre of sushi that has taken on an identity of its own. These establishments have expanded their side menus so sushi is no longer the only main menu item, and they have adopted choices from other fast-food restaurants (pork & rice bowls, curry, ramen, desserts etc.) so they have turned into much more comprehensive restaurants. 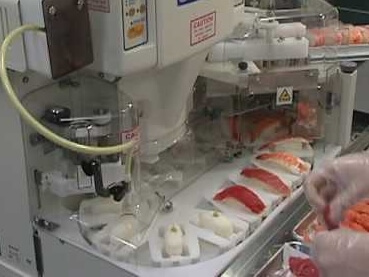 The characteristics of sushi, after all, are that it is easy to eat and a flavor that anyone can enjoy. However, there are some downsides. The tuna is almost all imported frozen. A lot of the toppings use substitutes imported from overseas and farmed fish. The work of creating the sushi is done by a robot (see the image on the right) so sometimes the shari (sushi rice or vinegar rice) and the topping are not pressed together properly. Without the important pressing step, the fish is essentially just lying on the rice, rather than the two parts becoming one, delicious piece of sushi. And most of all, there is no time and effort put into maturing the sushi toppings so it is like eating vinegar rice with sashimi on it. It may be called sushi, but it’s become a completely different genre than Edomae Sushi.

Related Content
What is the trick to super cheap Ikura at conveyor belt sushi restaurants?