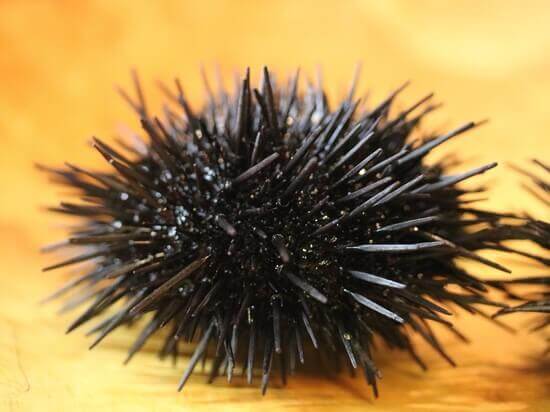 Uni is a blackish, burr-shaped creature that exists between rocks in the ocean. Uni is written with the Chinese characters 海胆. But when it is salted, we use the characters 雲丹, although the reading is exactly the same. In English, it’s called “sea urchin”. There are about 900 known species of urchin in the world. Of those, there are about 180 known species in the waters surrounding Japan. Coldwater Ezobafun uni and Kitamurasaki uni account for 3/4 of Japan’s sea urchin catches. 70% of the remaining 1/4 are Murasaki uni, 25% are Bafun uni, and the rest are Aka uni and Shirahige uni, among others.

Found on beaches everywhere from the Tohoku region to Kyushu. The shell is about 4cm in diameter and green in color. Their spines are short but sharp. They are delicious eaten raw but they can also be prepared as salted sea urchin or “tsubu-uni” (processed urchin). However, the yield is small because of their small size. They are caught in Hokuriku and Sanin regions since long ago, but Fukui’s salted sea urchin is especially well-known. The spawning season is from March to April.

These are distributed in the Tohoku region to Hokkaido from the intertidal zone to depths of up to 70 m. Their shell diameter is approximately 5 cm. The spines are short, dull dark green, or purplish. The spawning season is from July to October.

Kitamurasaki uni is distributed a little more south than Ezobafun uni and on occasion in Sagami Bay. On the Pacific side of Japan, this species inhabits the area from the Sanriku region to Hokkaido. On the Sea of Japan side, they are distributed across nearly all areas. The main production area is between Hokkaido and Toyama. Their shell is about 10 cm in diameter and larger than that of the Ezobafun uni, which lives in similar areas. Their spines are long and feel a little sparse compared to the Ezobafun uni. A thin line runs vertically along the surface of its shell. It is usually a dark purple color, but some can be slightly brownish. The spawning season is from September to January.

This is the most common sea urchin found along the shores of Japan. Its spines are thick, sharp, and dark purple. The shell is also thick and about 6 cm in diameter. It is distributed mainly in the warmer waters on the Pacific side of Japan. The spawning season is from May to August.

Its shell is 5-8 cm in diameter but the height is only 2-3 cm, giving the appearance that it has been slightly squashed. The spines are short, a full red-brown color but without the sharp tips. They share a habitat with the Murasaki uni so they often get caught with them. They don’t have the bitterness that is unique to sea urchin and they have a good aftertaste. They are delicate and have a light sweetness to them. The spawning season is from October to November.

Lives on reefs in the warm sea south of the Kii Peninsula and has a shell diameter of about 10 cm. Spines grow densely on their shell and most of them are in white or brown rows. This is the most important urchin to Okinawa, which has few edible sea urchins. It has strong umami and sweet taste and is comparable to Hokkaido sea urchins. The spawning season is from November to December.

The edible part of urchins is actually the gonads (ovaries and testes), and it is possible to distinctively tell the difference between males and females due to the gonochoric of the species (distinction in sexes). Sea urchins have five gonads and while the females’ are a reddish-brown color, males’ are a yellowish-brown color, but they are both orange before reaching full maturity. People often say, “Who in the world thought it would be a good idea to eat this?!” regarding urchin and sea cucumber, but apparently they have been used as food in Japan since the dawn of history. Of course, this is probably true of many coastal countries. 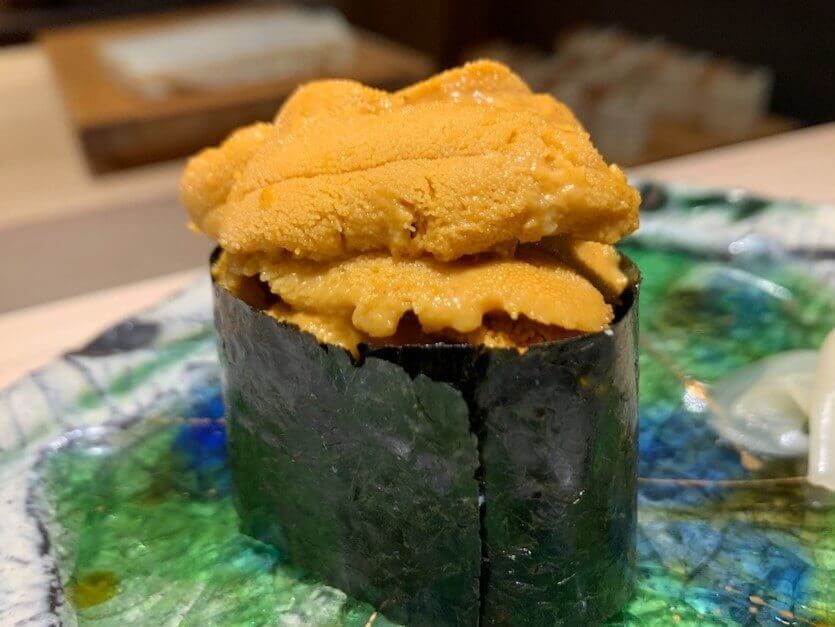 Uni is a premium ingredient as a sushi topping and as sashimi, but it is a newcomer to the sushi scene and only started to be used as a topping after WWII. It seems like with the introduction of gunkan-maki (battleship rolls) and progress in the manufacturing process, uni became readily available on the market and rose to become a popular topping.

Also goes by the name “Red” in Japan. This is a giant red sea urchin from the west coast of the United States, mainly produced in the Los Angeles area. It has a red shell, orange flesh, and the peak season lasts from October to May. The texture is slightly coarser than the Japanese versions, but the sweetness is comparable. The wholesale price is similar to that of Japanese sea urchins. However, giant red sea urchin catch has decreased dramatically in the past few years due to desertification on the California coast.

Giant red sea urchin from Vancouver, Canada has the coarsest texture and is slightly lacking in umami. It is also quite popular in the American market as a complement to California production. The wholesale prices of these are cheaper than that of Japanese sea urchins. The peak season runs from October to May.

The quality of giant red sea urchin produced in Ensenada, Mexico varies depending on the fishing ground, but high-quality sea urchins that are on par with domestic products can also be found. The peak season runs from July to December.

Also known as “Purple” in Japan. In the past, many giant red sea urchin inhabited the coast of California, and they would also be exported to Japan, but these have been replaced by purple sea urchin. Currently, 95% of the kelp that grows naturally on the coast of California, has disappeared, so the contents of the once premium quality purple sea urchin are now sparse. Unfortunately, they are worth nothing commercially.

Known as “Green” in Japan. This sea urchin lives in the area where the Labrador Current and the warm Gulf Stream collide. The fishing season for Northern sea urchin on the east coast of the US, such as Boston, is from early September to mid-April. The shell is green, but the body has characteristics that resemble Russian sea urchins, and it is highly regarded as the only imported urchin that is in a league with Bafun uni.

This sea urchin lives in the waters where the Peru Current flows. This is the go-to for cheap sea urchin in Japan and it is often used at conveyor belt restaurants. The quality and color of the meat vary depending on region, but the main variety produced in southern Chile (Chiloe Island and Punta Arenas) has orange meat, not much bitterness, and is considered to be top quality of the Chilean varieties. The season for catching them in central to southern Chile is early March to mid-October, and in northern Chile where the volume is lower, from late January to mid-October. 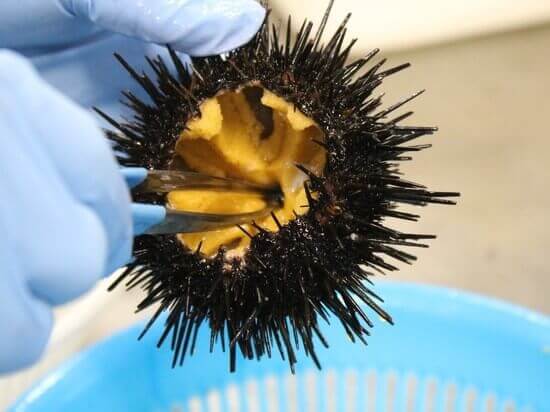 First, the shell is cracked open. There are contaminants (seaweed, etc. that the uni ate) mixed in the contents of the shell and that is completely removed. Next, the meat of the uni is carefully and quickly removed. This is cleaned with cooled seawater while removing the contaminants with bamboo chopsticks. The moisture is removed and then bamboo chopsticks are used again to individually line up each piece in a wooden box (this is called ita-uni or hako-uni). Depending on the case, once the freshness of the uni drops, the meat begins to dissolve, so aluminum potassium sulfate and alcohol may be used to keep the shape. 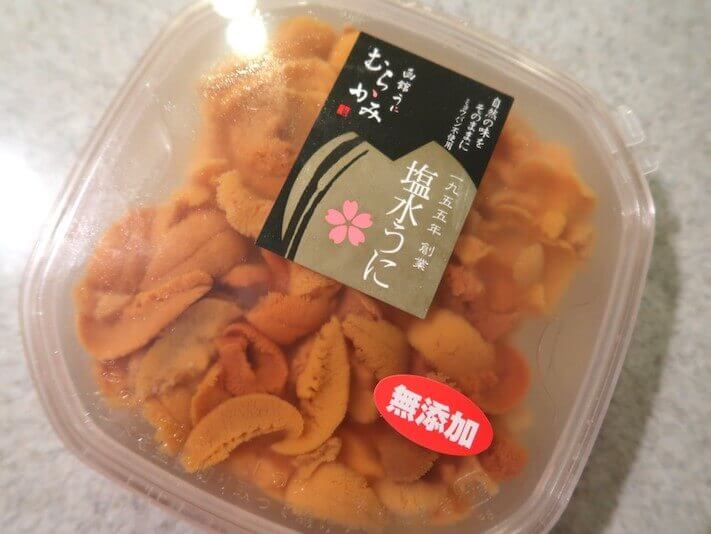 The hint of bitterness you may taste is from that aluminum potassium sulfate and/or alcohol, so you can now find uni without additives or uni that has been soaked in saltwater. Formerly, there were three main uni manufacturers, Tachibana Suisan, Ogawa Suisan and Hadate Suisan. However, now there are many companies competing in the market processing high-quality uni.

According to research, the uni flavor and color depend on what that uni has eaten. Sea urchin that eats a lot of seaweed rich in umami components, like kelp, is said to generate the best flavor.

The umami flavor of uni (sea urchin) is mainly made up of amino acids and nucleic acids. Some of the amino acids found in this topping are glycine, alanine, valine and glutamine. The sweetness of sea urchin is related to the glycine and alanine content, while its richness comes from glutamine. It doesn’t have a high inosinic acid content, which is a nucleic acid, but the synergistic effects of the inosinic acid and glutamic acid bring out the umami flavor. It also contains methionine, an amino acid, which contributes greatly to the unique flavor that sea urchin is known for.

Uni distributed in Japan is broadly categorized as those related to Murasaki uni and those related to Bafun uni. Uni related to Murasaki uni, with light yellow pieces, are called Shiro uni and uni-related to the darker yellow Bafun uni is called aka uni at the market. Generally aka uni has a sweeter flavor than Shiro uni and tends to last longer so it is considered to be high quality. It is hard to say one tastes better than the other. They both have clear textures when fresh and when dissolving it means they are old.

Now we would like to explain how you may eat uni at a sushi restaurant.

Aka uni has a fine texture and when you take a bite you’ll notice its sticky sweetness as it gently melts in your mouth, leaving a unique, strong aftertaste. It is mainly eaten as gunkan-maki (battleship roll). 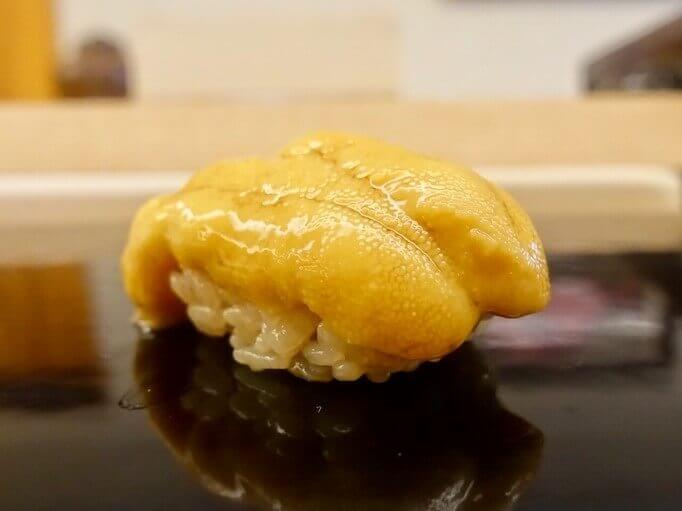 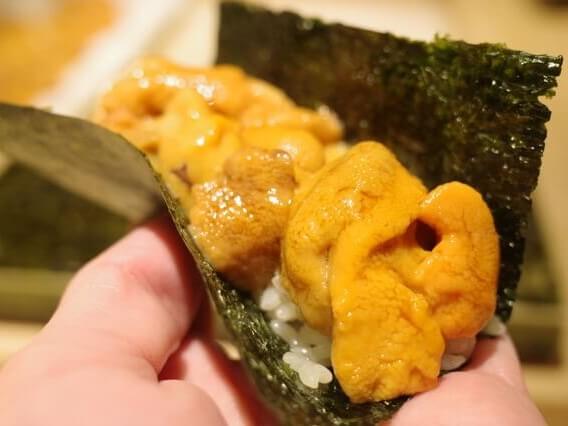 As hard as it is to believe, it is also sometimes eaten as temaki (like a uni sandwich), which requires about three times the amount of meat as gunkan-maki. Any type of uni can be used for temaki. Any sushi restaurant will make uni temaki for you but be prepared to pay about US $50 per piece.

Of course, it is also sometimes served as hoso-maki, but makimono (rolls) are prepared as the final piece of a meal and we don’t recommend ending a meal with uni-maki. This is because we worry that it will whet your appetite rather than satisfying it.

What is the best time to eat uni in Japan? 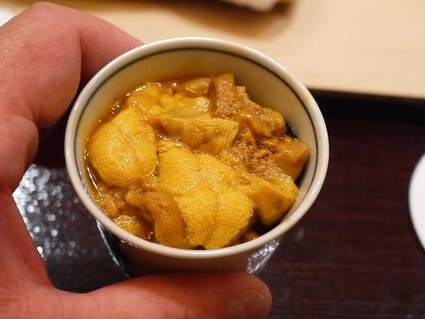 The price of uni

As the volume is decreasing throughout the world, the price is soaring due to the popularity of sushi and premium seafood worldwide. Standard-quality shucked uni harvested in the seas around Japan and China average the US $120 per kilogram at market price while premium quality goes for over US $500 per kilogram.

Uni contains copious amounts of vitamin B1 and B2, glutamic acid, and EPA which helps maintain a healthy heart. It is soft, good for digestion and is absorbed well, so it is excellent for providing nutrition to the infirmed and elderly. Some are also rich in vitamin A, which means it maintains normality in the mucous membranes of skin and prevents wrinkles and freckles, and even has cancer-prevention effects. On the other hand, too much can trigger osteoporosis, so be sure to eat it in moderation. Although uni is not commonly consumed in large quantities, uni is high in cholesterol so people with hyperlipidemia must exercise care when eating it.

Related contents:
Why is it that sea urchin sushi can taste bitter?