Here we will explain exactly what Edomae (Edo-style) means.

In fact, the first type of restaurant “Edomae (Edo-style)” was applied to was eel restaurants. Ieyasu Tokugawa was ordered to Edo (modern Tokyo) and put all of his efforts into developing the uninhabitable land into a city. He changed the flow of the rivers and built an island in a shallow part of the sea in front of Edo Castle. A large amount of eel was caught in the construction process, and one smart person upon seeing this, cut the eel up, skewed it and grilled it with miso to sell at great profit to laborers as their lunch. This was called Edomae (Edo-style) grilled eel (or more literally grilled eel in front of Edo). 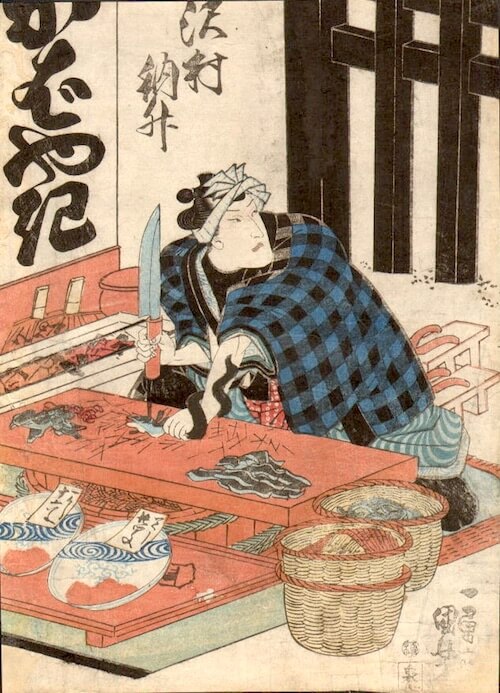 Around this time, the eel caught in front of Edo castle was known as “Edomae (or in front of Edo) and it was classified differently from the eel that took many days to transport from outlying regions, which was called “Traveling Eel” (tabi-unagi). Edomae carried a reputation of not only being delicious but also fresh.

Also, before long “Edomae” became synonymous with “refined (iki)*” or “chic (inase)**” because the seafood caught in the sea in front of Edo was “lively with good form.” Then the term was used when holding ceremonies according to Edo customs, so it became a word that symbolized the character of Tokyoites. You can imagine people deliberately using the term “Edo-style/Edo-mae” to counter the prefix “Miyabi***”, which is used to refer to the noble court culture of Kyoto.

*Iki (粋) means something that is glamorous, noble, and refreshing.

** Inase (鯔背) means a bit of “iki” and assertive, used to compliment manliness.

At that point in history, there was no refrigeration or ice and eating fish raw was not possible, so seafood would be treated in various ways so that it could be kept for a period of time, for example, treating it with salt and vinegar while it was fresh, boiling, or soaking it in soy sauce. As result sushi transformed, starting from a preservation method and morphing into a way of enjoying food that maximizes the umami of the ingredients. Later, these methods would come to be known collectively as “Edo-style work (edomae shigoto).”

Nowadays, less seafood is caught in the Tokyo bay area in front of Edo, and the overwhelming majority comes from other regions and from overseas. By that definition, the term Edomae is being stripped of its substance in a way. However, nobody seems to mind what the original meaning of the word was, and nigiri-sushi is referred to as Edomae sushi all over Japan. The term Edomae sushi (Edo style sushi or Edo sushi) is understood everywhere from Hokkaido to Kyushu.

Edomae (Edo-style) has meant a lot of things through the years, but now it is a phrase that really represents the culture that Tokyo has given to the country and the world.