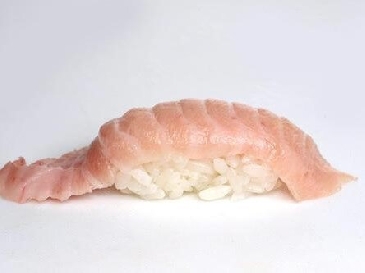 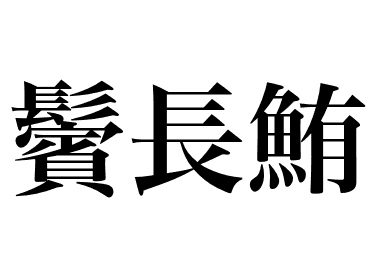 【Nigiri sushi: Akami】
This is the smallest of the tuna with a length of about 1.2m and a weight of 40kg. Binnaga maguro (Albacore tuna) is found from temperate to tropic regions all over the world and mainly southward of the Tohoku regions of Japan. They are sometimes found in the southern part of Hokkaido, but it is rare to see them in the Japan Sea. The fishing sites in the Pacific Ocean are the southeastern seas of Japan, the coast of North America and the open seas of the South Pacific Ocean. Around Japan, the long line fishing method and Ipponzuri* are mainly used. The color of the meat is a soft pink and it is soft, so it wasn’t considered to be suitable for sashimi, but lately, more fatty meat is used for both sashimi and sushi toppings. The source of canned tuna is called white tuna and it is of superior quality to the light canned tuna made from Kihada maguro. Canned tuna in oil is used for salad and sandwiches. Also, since the meat doesn’t harden when heated, it is preferred for steak and teriyaki. The wholesale price of albacore tuna (frozen) at Toyosu Market is 3.5 to 4.0 US dollars per kilogram.

*Ipponzuri (Catching fish with fishing poles)
This method has the longest history and uses a pole of 4 - 6 meters to fish from a boat. Using a machine that winds up lines automatically and also using human hands, pulls up tuna.

Albacore tuna swims close to Japan's shores from spring to summer and because of what it eats (mainly sardines), it has lots of fat and its body turns from pink to white. This is called “Bintoro (Sometimes called Shiro maguro or white tuna).” It’s a popular item at conveyor belt sushi. As an aside, the deep-sea fish Escolar is sometimes used as a substitute for albacore tuna because the taste is similar to toro. You should be careful though, as this fish is known to stimulate bowel activity. Incidentally, this fish is not sold in Japan.