You may think you know about wasabi and how it plays Sushi’s supporting role, but how much do you really know? Today, let’s go back to basics!

Wasabi is indigenous to Japan. It is not only native to Japan, it is also only traditionally grown and eaten in Japan. It is essential to the food culture of Japan and represents the tastes of Japanese people.

Now sushi and wasabi are an inseparable duo, but the first time wasabi was actually used with sushi was the end of the Edo period. Of course wasabi has its own taste and flavor, but the effects of offsetting the odor of fish and suppressing growth of bacteria was probably learned through experience. It quickly became a staple among common people and its popularity spread throughout the country.

The unique pungency of wasabi is a component called Allyl Isothiocyanate (Also known as mustard oil. Hereafter we will refer to it as mustard oil). When wasabi is grated, its cells are destroyed and a component called “sinigrin” found inside of those cells is decomposed by enzymes. That is the first time it takes the form of mustard oil. That’s why the wasabi plant itself isn’t spicy if you lick it. The mustard oil has volatility, so it creates a sens of going through your nose the moment you eat it. Also, because of the volatility, the spiciness and pungency decreases over time.

Actually, daikon radish is from the same Brassicaceae family of plants. The spicy feeling you get when eating grated daikon radish is from the exact same components. The Karami daikon (hot daikon) is an especially pungent variety, and it has been used as a seasoning in the same way as wasabi for soba noodles. Generally, when people around the world think of spiciness, they think of the cayenne pepper, but Japanese people tend to like the mustard oil spice.

Wasabi is pungent, but it lasts for a very short time and after it passes through the nose, it leaves you with a cool sensation, and there is no feeling of discomfort. The stimulation increases your appetite. If you drink a hot drink like tea, it resets your palette, making you eager for the next delicious bite. Its appearance makes an impact, but it’s actually subtle, it isn’t flashy, but it is unique, practical, effective, with a strong taste. It is a really exquisite balance.

Wasabi is divided into the two major categories of Hon-wasabi and  Seiyo-wasabi (western wasabi, or horseradish). Honwasabi is the wasabi grown in Japan that we generally think of when we hear the word wasabi. The most famous types of Honwasabi include Mazuma, Daruma, Masamidori, Shimane-sangou, but since these are used to breed new types on a daily basis, there are an infinite number of types of wasabi.

Hon-wasabi is further divided into the two major categories of Sawa-wasabi and Hatake-wasabi. The name of these categories is derived from how each type is cultivated, but there is no difference in the botany of the two. “Sawa-wasabi” is also known as “Mizu-wasabi” (water wasabi) and it is cultivated in clean, flowing water full of nutrients at a constant temperature. This is mainly cultivated as seasoning for dishes like sushi and soba.

“Hatake-wasabi” is also called “Riku-wasabi” or land wasabi, and is cultivated in soil like other vegetables. The root stock grows in the ground, so it doesn’t get too big and it is mainly grown here for use of the leaves and stem. The leaves and stems are shipped as raw materials for processed foods.

On the other hand, “Seiyo-wasabi” refers to the horseradish cultivated in Europe, which is called “wasabi daikon” or “yama-wasabi” (mountain wasabi) in Japan. It’s the same perennial herb of the Brassicaceae family, but hon-wasabi is of the Eutrema genus and Seiyo-wasabi is part of the Armoracia genus. The color, shape and flavor are different, so they are similar but different.

Many powder and mixed wasabi products use this horseradish as the raw ingredient, but there are also other ingredients besides the stock root of hon-wasabi used to create the aroma and color of wasabi. When the package states “Made from hon-wasabi,” this means that 50% or more of the contents are wasabi and when it says, “includes wasabi,” that means that less than 50% of the contents are wasabi. 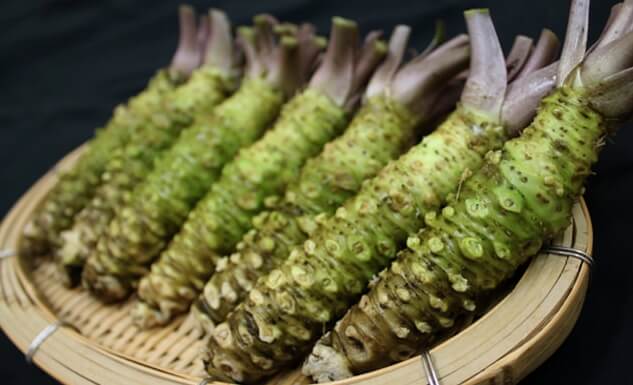 Why does “Mazuma” wasabi go best with sushi?

While there are countless types of wasabi, Mazuma has been ranked as the greatest of all. It has the perfect balance of sweetness, stickiness and wasabi’s pungent aroma. The stem of Mazuma wasabi is a reddish-purple color, so you can recognize it immediately.

Mazuma is grown from root division, unlike the seedlings that use young plants grown from seeds. Cultivation is also difficult and requires 2-3 years, while other wasabi plants only take 1.5-2 years. Therefore it yields a high scarcity value and you won’t find it at the supermarket, as it is only supplied to high-end sushi restaurants.

This Mazuma is mainly produced in Izu, and Shizuoka is well known for its Mazuma. However, the birthplace of Mazuma wasabi was actually the former Mazuma region (currently Inamicho-kawamata) of Wakayama prefecture. There are about 300 farmers in the city of Izu, but only about 10% of these farmers cultivate Mazuma wasabi exclusively.

Sushi restaurants don’t like to use wasabi that is soft with no stick that makes the rice soggy. The watery Misho wasabi used for mass production are better for western foods than for sushi. When you put Mazuma wasabi in your mouth, the aroma fills the air before the spice takes effect. Rather than the sharp flavor of the Misho, Mazuma has a deep, gently spice, ideal for sushi restaurants.

Does the amount of wasabi change based on the sushi?

Wasabi is a very delicate seasoning. The way it’s used differs depending on the sushi topping. Generally wasabi isn’t as effective for toppings with a high fat content, and very effective on toppings with a lower fat content. For example, the reason wasabi works well with squid is the low fat content. On the other hand, wasabi isn’t as effective on the red meat of tuna. That’s why it contains more. Furthermore, when it comes to toro, often more wasabi is used than the akami (red meat) of the tuna.

How to select Wasabi

Find a plant that has the same thickness from root to tip, with a bright green color. Wasabi grows while dropping stem leaves, which leaves a bumpy surface on the plant. It’s like the rings you find in trees. These bumps are proof of deliberate growth and means that the quality is good and the spiciness and flavor are good as well. Also, wasabi is cultivated so that it can be harvested all year long, but it is more pungent in the colder months so it’s considered to be in-season from November to February.

How to grate Wasabi

The cells on tip are older and those closer to the stem are younger. The younger it is, the more watery and the fresher the color. The potency is in the tip. In general it’s considered better to grate from the base, but if you’re going to use one wasabi plant divided over a number of times, it’s better to start at the tip so that you don’t lose any of the flavor. Mustard oil has volatility so it’s at peak spiciness about 5 minutes after grating, then the flavor starts to drop gradually after about 30 minutes have passed. The smaller the spikes on the grater, the more cells it can break open, making more mustard oil. This is why the rough shape of the sharkskin is perfect for grating wasabi.

A thorough comparison of Wasabi graters

There are various types of wasabi graters. The grater you’ll usually see at a sushi restaurant is called a sharkskin. You may wonder if sharkskin is really that great, or what kind of grater you should buy for your home. Let’s compare the features of the three major types of graters: sharkskin, stainless steel, and ceramic.

This is the typical tool for grating wasabi. Long ago during the Edo period, carpenters used shark skin as a file and that’s where the idea came from. Even though it’s written as “shark” skin, most of these graters are made from drying the skin of one type of “ray” fish. The rough form, which is made of the same type of enamel as human teeth is used to grate the wasabi, It can grate very finely and creates a creamy finish. It is the best for bringing out the sweetness, spiciness, stickiness and other potency of the wasabi, but you need to be careful when procuring one. It needs to be washed with cold water, and set out to dry in the shade. No detergents or dryers can be used on it. It also shouldn’t be soaked in water for long periods of time. 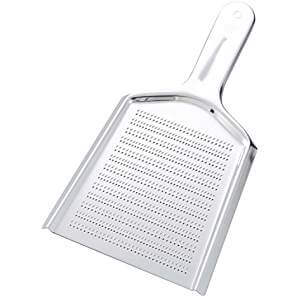 This is the fastest tool for grating wasabi and it’s the easiest to find. It doesn’t have the creamy texture of wasabi grated with sharkskin and it has a rougher finish, but some people actually prefer the lumps left in it. Still, the aroma and stickiness can’t compare to sharkskin. 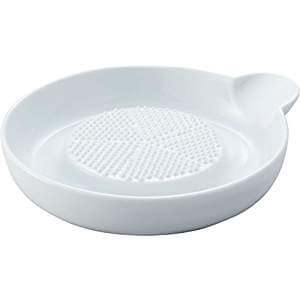 Just like the stainless steel, this tool makes it quick and easy to grate Wasabi. Also, most of the ceramic utensils can be used for serving on the dinner table, so it’s gaining popularity. It brings out a clear spiciness, but the aroma is lacking, like with the stainless steel version.

Each has its own advantages and disadvantages, but if you want to create the best taste, the sharkskin is the only option. Leading to the conclusion that our ancestors’ wisdom was amazing. No matter which utensil you use, the secret to grating wasabi is to take it slow and grate in a circular motion without pressing down too hard. This will give you an aromatic, tangy wasabi to enjoy.

How to Store Wasabi

Wrap it in a wet newspaper, then wrap that in plastic wrap and store in the refrigerator. The wasabi can also be placed in a cup of water and put in the refrigerator. This method can be used for about one month. If you want to store it even longer, freeze it first, then grate it without thawing, and freeze again.

Famous places where Wasabi is farmed 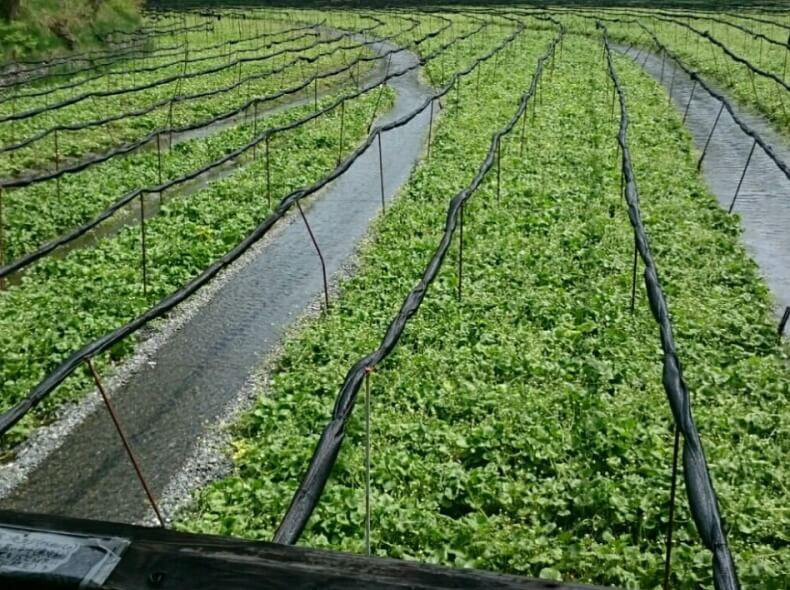 Wasabi fields you can visit

Related Content
Does the taste of wasabi differ depending on the grater?!

Why do some sushi toppings have ginger instead of wasabi?

Best supporting role for wasabi that magnifies the umami in sushi many times over.