This article explains Edo-style work performed on the sushi toppings in detail from both a historical perspective and with a focus on the preparations. 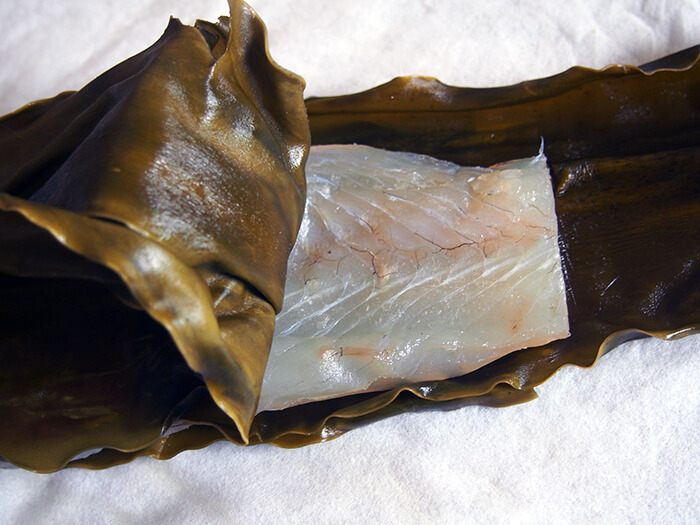 The most important part of Konbujime is the amount of salt the kelp is seasoned with. Dried kelp that has been soaked in water then washed in vinegar is lightly salted and filleted bastard halibut (white fish or shrimp may also be used) is sandwiched in between these sheets of kelp (There are also recipes that call for salting the fillet directly, then sandwiching between kelp after rinsing the kelp with water). The reason the founder isn’t salted directly is that it would make it too salty. Including the saltiness with the umami of the kelp creates a more mild taste. This work is applied mainly to white fish with low-fat content such as flounder, sea bream, halfbeak, Japanese whiting, and lately shrimp is another popular choice. 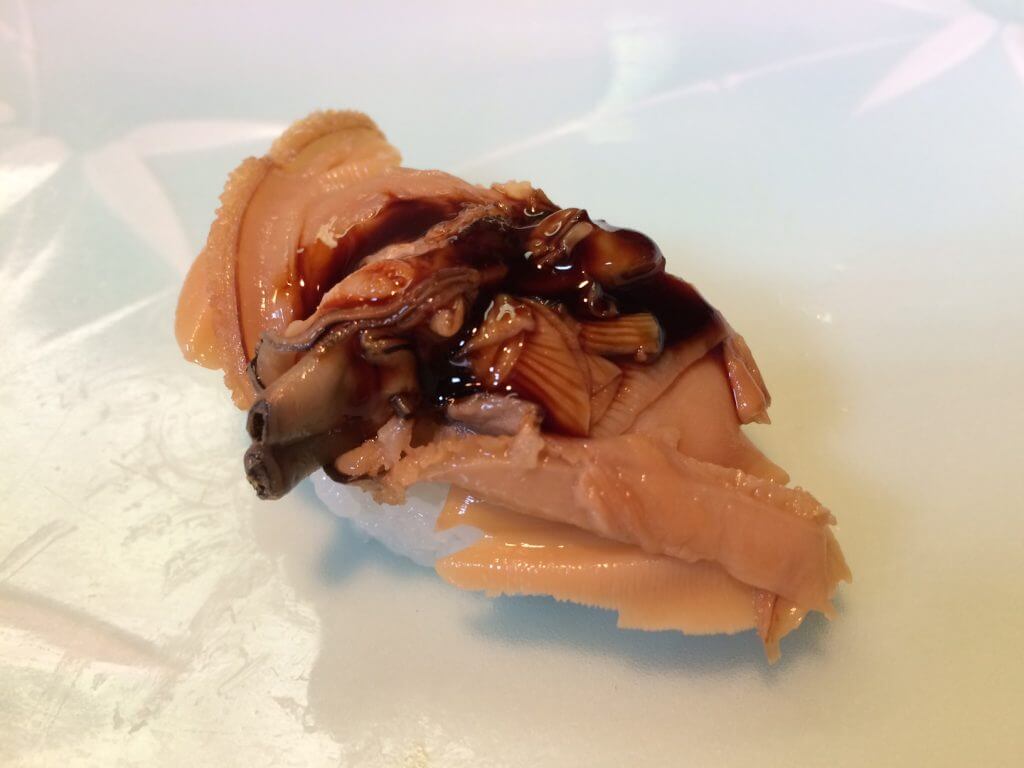 There has never really been a practice of eating clams raw. In Edo-style sushi, the clam is a popular sweet topping just like egg omelet and conger eel. The most important thing to watch out for in order to maintain the softness of the body of the clam is to not let it get too hot. After peeling out the meat, it is boiled briefly, completely cooled, then pickled in a special broth. The pickling sauce is specially made using clam broth. The clam itself is sweet, so the sauce isn’t as sweet as that used for conger eel, and since the clam meat loses its freshness easily, so it can’t be made in advance. There are a number of sushi restaurants that use the same Nitsume as used for conger eel, but some restaurants use something called, “tomotsume,” which is made from boiled down pickling sauce. 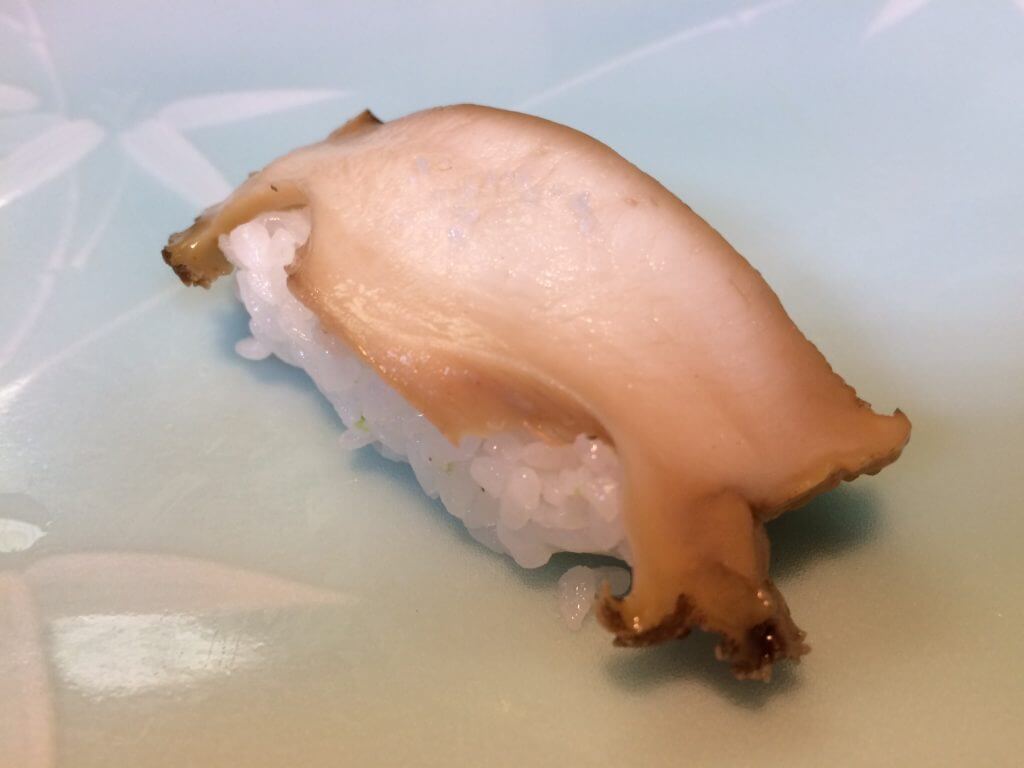 The most important thing in the preparation of abalone is to not let the fragrance getaway. It is steamed for several hours. The heat is adjusted from strong to weak, high to low, steaming the abalone until it is soft, while maintaining the fragrance. After that, it is cooled at room temperature and the flavor is brought out slowly. 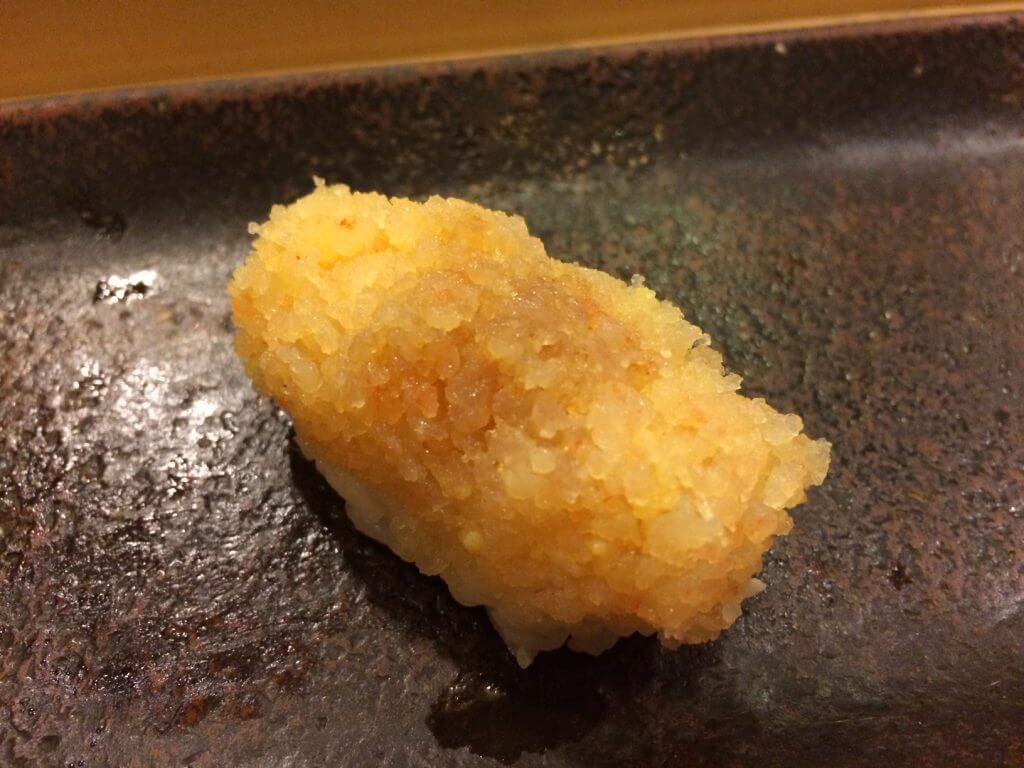 Usually, salt, sugar and mirin are added to mashed shrimp meat and white fish meat, and then roasted in a pan until they become even smaller flakes. In the older style, Oboro flakes used to be put between the topping and shari in order to make the sushi taste milder since the fish ingredients used to be pickled in strong flavor. Sometimes sweet Oboro is served as the final dish instead of dessert. 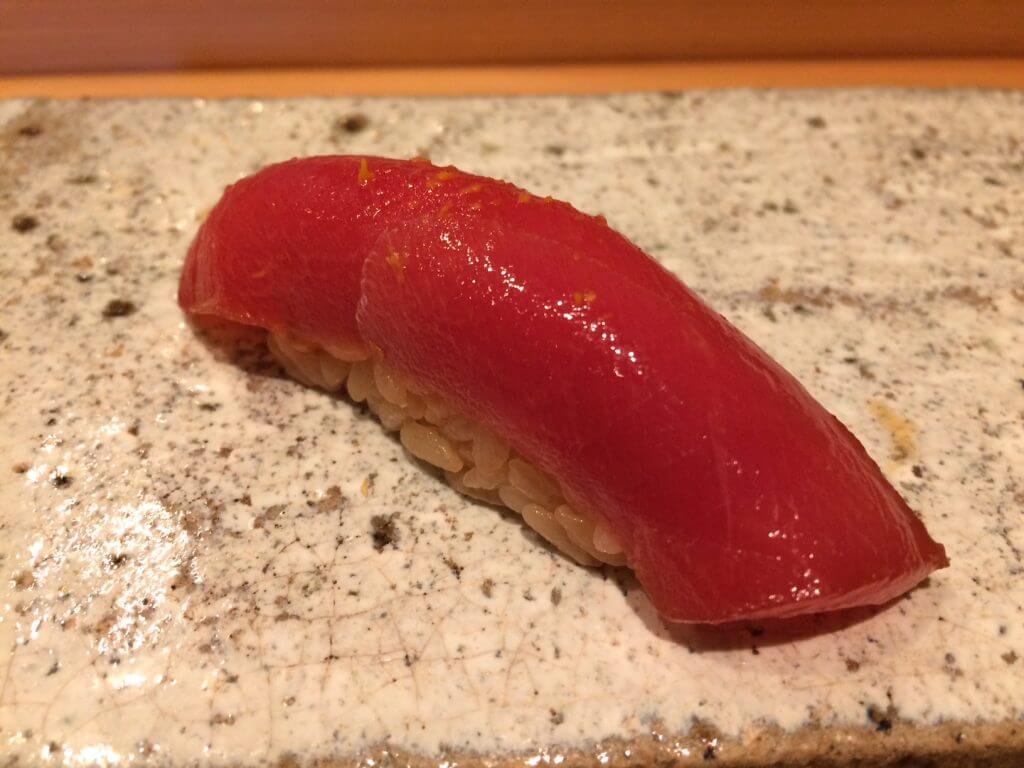 This practice was created to improve preservation as well as to add luster and flavor by marinating red tuna meat that has started to darken in nikiri-shoyu (boiled down soy sauce). This pickling removes the moisture from the meat and causes the umami to be concentrated. Tuna that has been put through a Yubiki* process once, then is marinated while still in the fillet state (known as “Saku” at sushi restaurants) is called “Saku-zuke,” and if it is first to cut into sushi topping size then marinated, it’s called, “Hira-zuke.” Lately, this method is often used for white fish like yellowtail or Spanish mackerel.

*Yubiki (Parboiled) means to dip fish, etc. in boiling water so that only the surface is boiled. 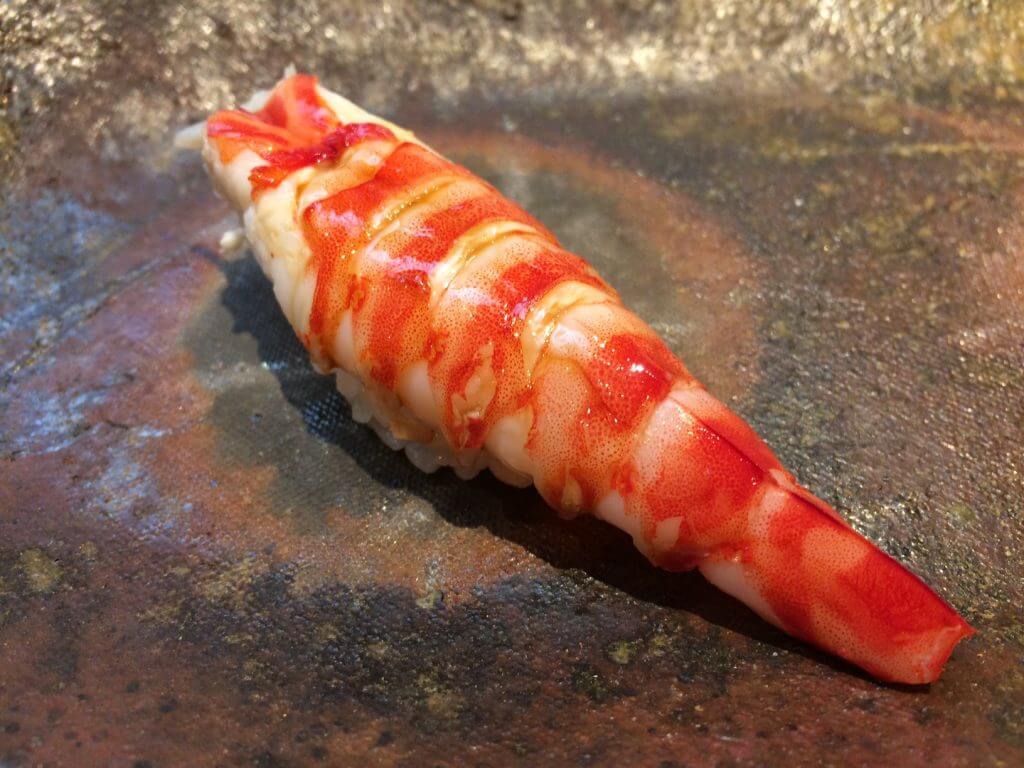 The most important part of the preparations of kuruma prawns is how long to boil. In preparing kuruma prawns, they are first washed in cold water, then boiled in salted water, but it is the boiling here that determines whether the prawn will become delicious sushi or not. The general idea is to boil until the kuruma prawn at the bottom of the pot floats up to the surface and over-boiling will make the meat get hard. The prawn will turn a bright red from boiling and immediately dunking in ice water makes the colors even brighter. The shell is then removed and it is sliced with a knife before being placed on top of the sushi. This is what makes the rich scent unique to the kuruma prawn fill your entire mouth. More restaurants are starting to serve freshly boiled kuruma prawns. 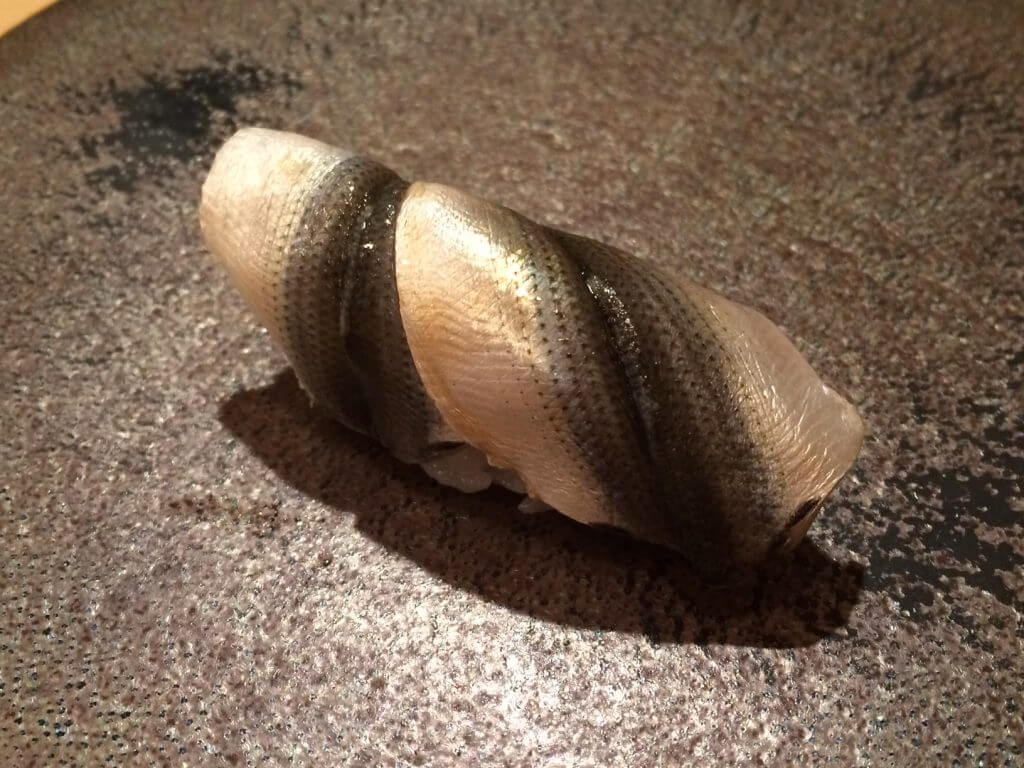 The gizzard shad is a thin-bodied blueback fish with many small bones and it doesn’t taste great raw, boiled, or grilled. However, when it is pickled with salt and vinegar, in true Edo-style fashion, the fish becomes a premium sushi topping with rich fragrance and umami. How much time the fish is left after being salted and how long it is marinated in the vinegar, is up to the sushi chef. The pickling process is adjusted slightly on a daily basis with consideration for the size and thickness of the fish, fat content and the temperature of the air. Incidentally, marinating fish in vinegar eliminates the raw odor and concentrates the protein for the purpose of locking the umami components of the fish inside. 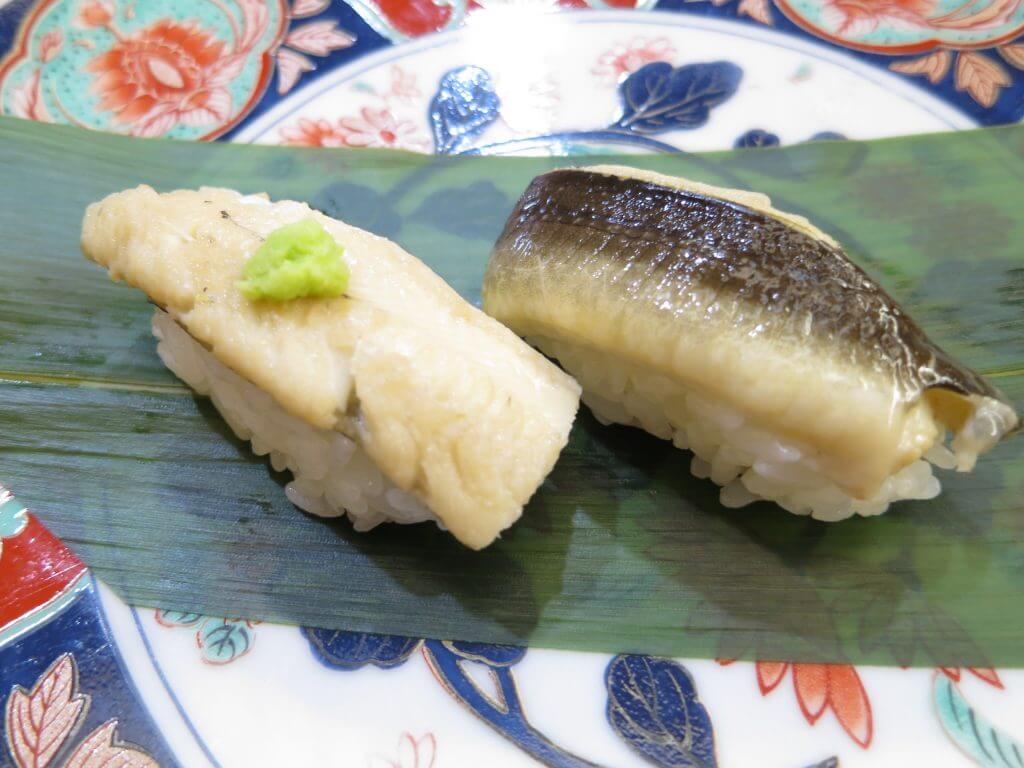 To put it simply, generally the method of preparing boiled conger eel is to slice it open, remove the organs and bones, boil it down in broth, and serve. While it is one of the simpler preparation processes, the sushi chef’s skill is tested in how it is boiled. This broth, soy sauce, sake, and sugar, for which the technical term is, “motozuyu,” is replenished and used over and over again. That means the flavor gets deeper and milder. The Tsume applied after making the sushi is boiled down after adding conger eel bones and head to the broth, so it exhibits the characteristics of the restaurant’s unique flavoring while adding the sweetness and fullness of the conger eel. 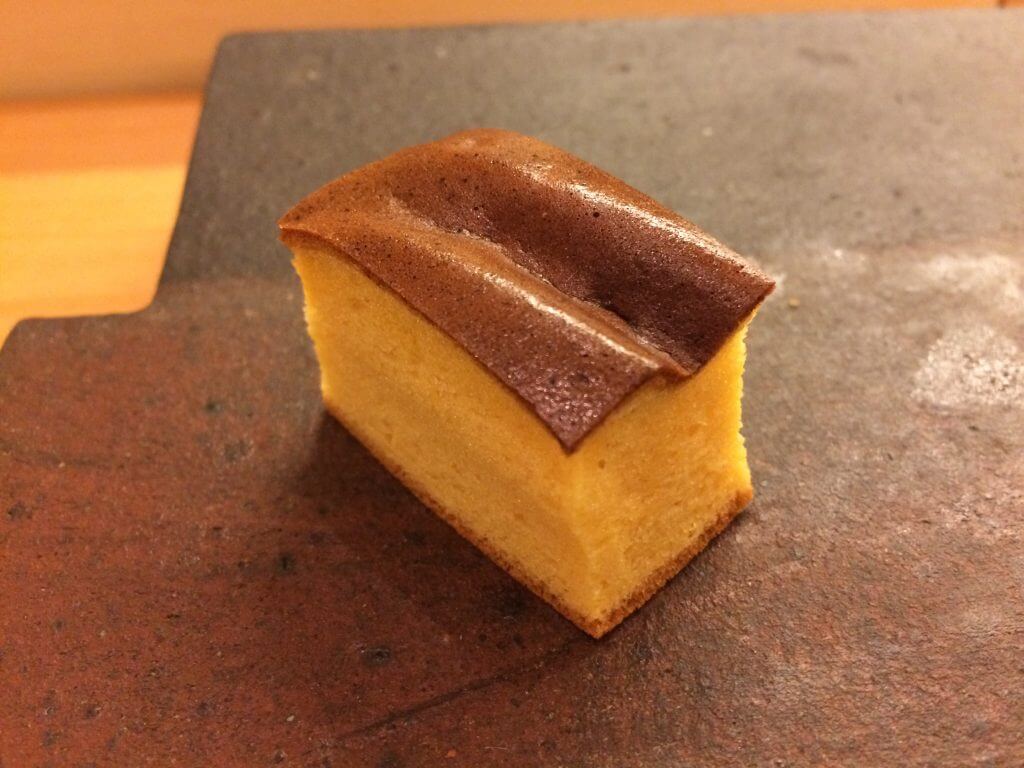 The omelet is made by beating egg quickly, then adding seasonings such as dashi (soup stock), mirin and sake. Next, a paste of white fish like Japanese whiting and shiba shrimp is put into a bowl as a liaison, then the egg mixture is mixed in a little bit at a time. Care must be taken because if this work is done in a warm room, the egg deteriorates. All of this work leads to the taste and the glutinous texture of the egg when you put the piece to your mouth. The pan should be well-heated in advance and the egg mixture needs to be cooked at low heat. By cooking it slowly on low heat, the heat will go through from the middle, creating a delicious slight brown color. 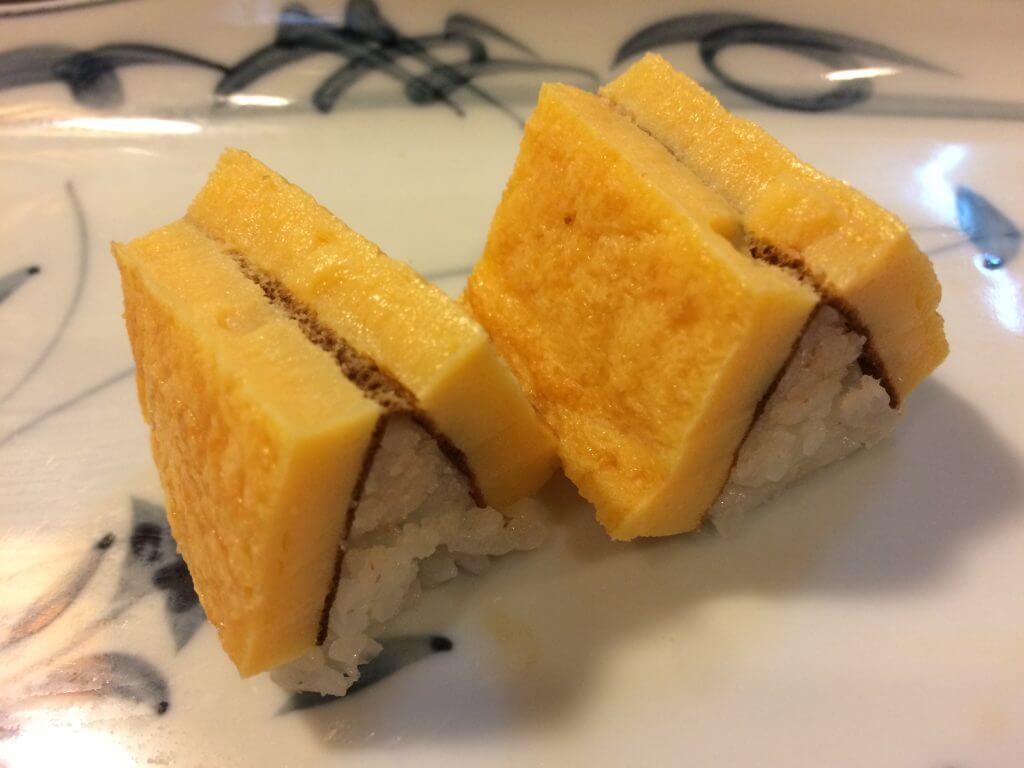 Besides the Edo-style “Kura-gake**” shape of sushi, there is also “Kashiwa-tamago” made with shari wrapped in thin egg omelet, and shari stuffed in a thick egg omelet. Some restaurants actually bake it like sponge cake.

**”Kura-gake,” means making cuts in the middle of the thick egg omelet and folding it like a half-open book, then stuffing vinegar rice inside. The shape is similar to a horse saddle, which is what “Kura-gake” means in Japanese. 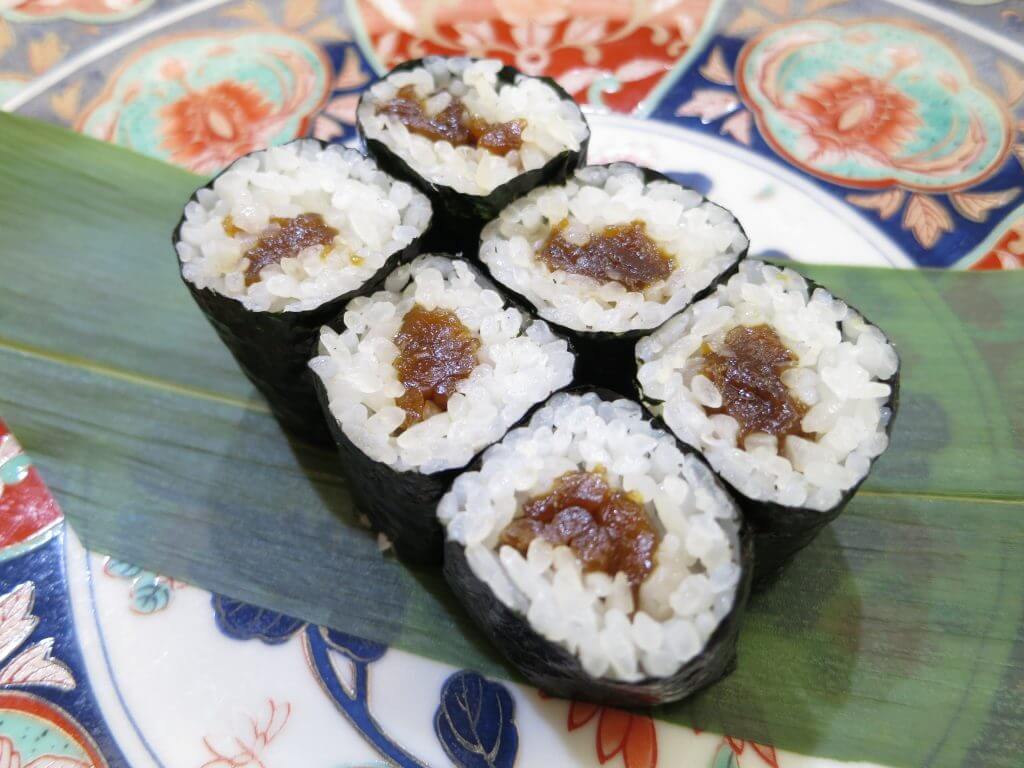 Kanpyo was the only seaweed roll ingredient during the Edo era. Nowadays when someone says Edo-style sushi seaweed roll, they are referring to Kanpyo-maki. The texture of the dried gourd shouldn’t be too hard or too soft. It should have about the same firmness as the shari. 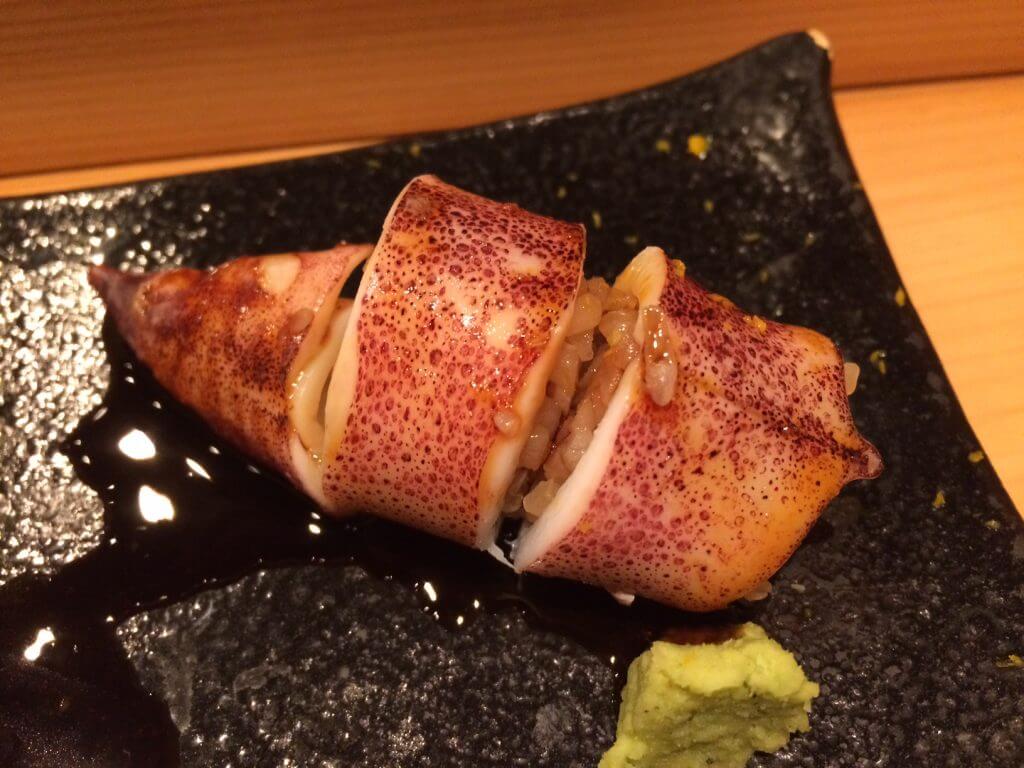 This dish can’t be found at every sushi restaurant, but you can try it at shops that are particular about traditional Edo-style work. Squid, boiled in a special broth for squid made by adding sugar and other ingredients to soy sauce, just enough so the color doesn’t change, that has undergone one more type of preparation (the body of the squid is used instead of an Inro***, and stuffed with salty-sweet boiled dried gourd shavings, dried shiitake, cloud ear mushroom, hijiki mixed with shari).

***Inro is a small container mainly used by samurai to carry medicine, carried on their waist. The container was originally used for holding an “Inkan” or official name seal, which is where the “In” from “Inro” came from. 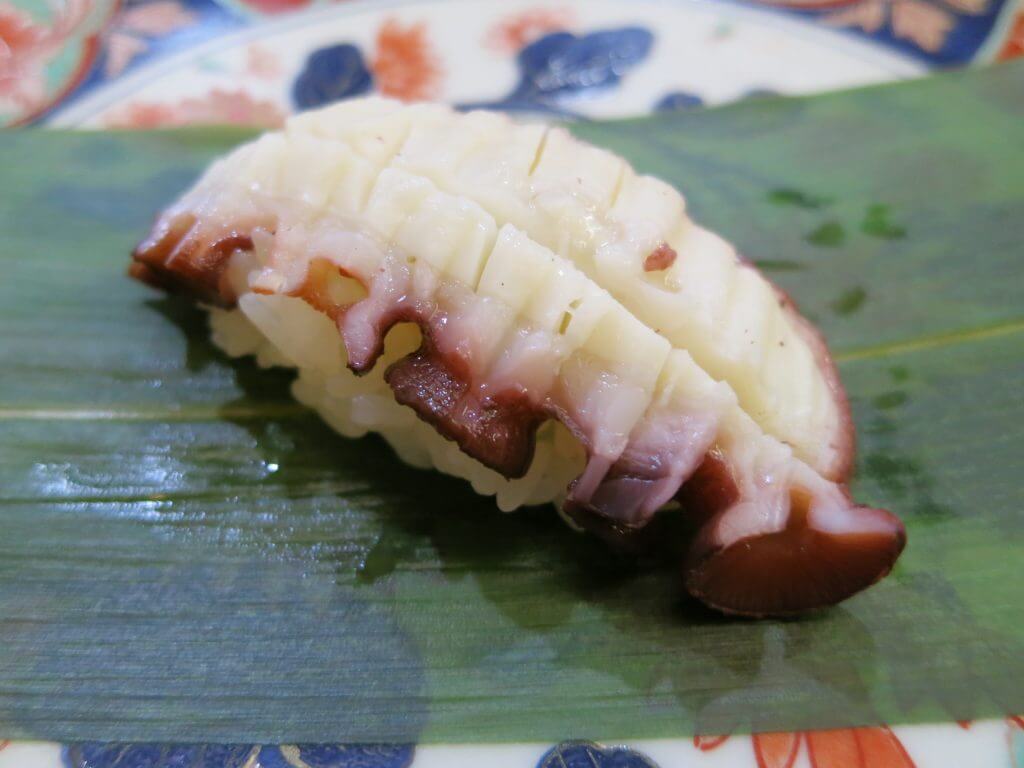 The knives are used for a variety of work in order to make toppings that are tougher and hard to chew easier to eat, by making cuts in the meat, changing the texture of the topping, to make the shari conform to the topping, take the sushi look more attractive. 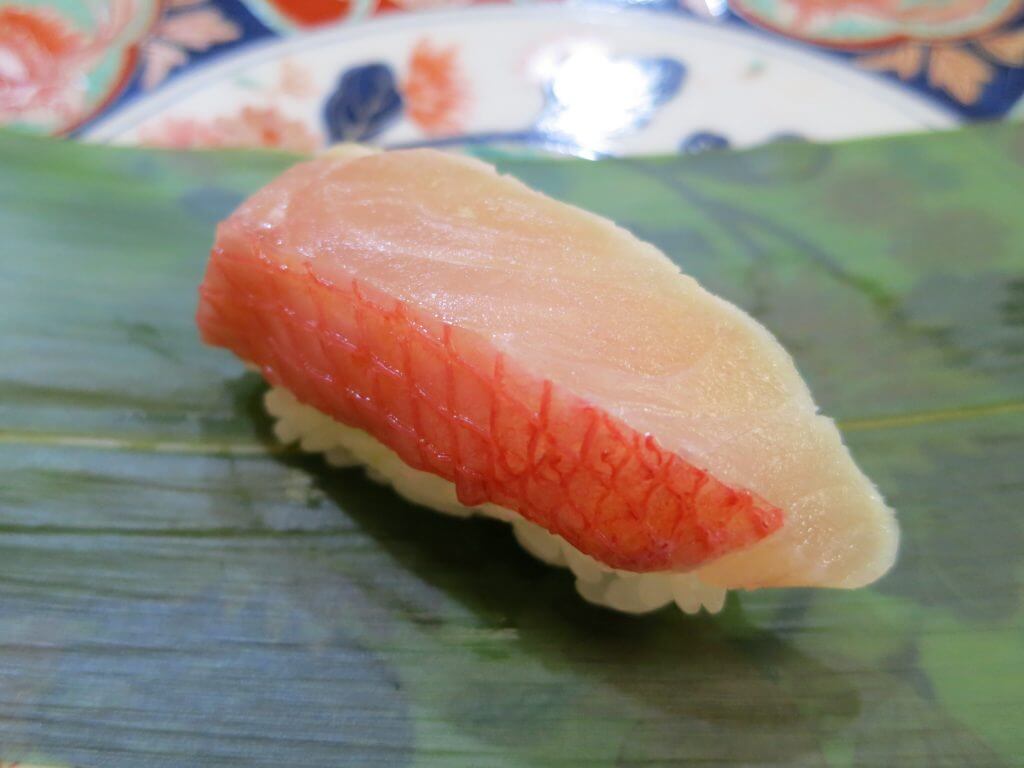 Yushimo work is performed on fish with beautiful skin. Heat is only applied to the skin portion and care is taken to make sure the heat doesn’t pass all the way through the center of the meat. When boiled water is poured on the fish, the heat only passes through to the skin and the subcutaneous fat. Care must be taken, because if too much heat is applied, the skin’s natural chewy texture becomes too soft. After being doused in hot water, the fish is immediately submerged in ice water to cool. This work is applied on red seabream (madai), Splendid alfonsino (kinmedai), Golden tilefish (amadai), etc.

There is umami in the skin, so grilling can transfer the aroma of the cutaneous fat to the meat. It is the same as “Yushimo,” performed on fish with beautiful skin, in that it brings out the umami, but it differs in that the fish prepared using Yakishimo have hard, thick skin, like mackerel or chicken grunt. After grilling, it is immediately chilled in ice water. 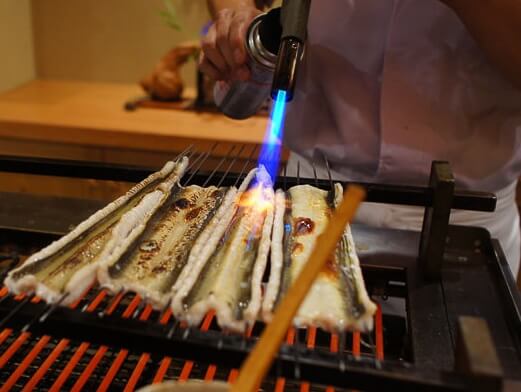 This work is done for fish with high-fat content. Aburi, or broiling, means to apply flame to the fat, not to sear it. Compared to raw toppings that haven’t undergone any work, broiling the fat increases the fat of the umami and spreads its aroma. Another benefit is that it’s easier to eat for people who aren’t fans of fatty toppings or who prefer to not eat raw fish. The amount of broiling differs depending on the fat content, so care must be taken with the level of flame and how long it is broiled for. This technique is mainly used for fatty tuna (otoro), splendid alfonsino (kinmedai) , Japanese amberjack (buri), salmon, etc.

This is done to suppress the smell and improve preservation. It also is effective in sterilizing so it is especially preferred to clean shellfish with vinegar. Compared to sujime (pickling vinegar), the vinegar used for cleaning is diluted, and since it is only used to wash lightly, the vinegar leaves behind almost no flavor. This work is applied to blueback fish such as horse mackerel.