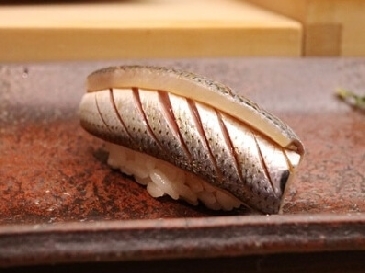 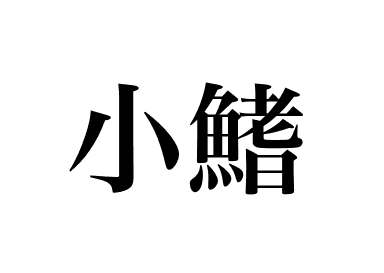 What is Kohada? What does kohada nigiri taste like?
Along with the red color of tuna and the white color of sea bream, the shiny color of “hikarimono” (silver-skinned fish). The definitive representative of hikarimono, and the fish topping said to “showcase the skill of a sushi chef” is “kohada” (gizzard shad).

Nowadays kohada is an essential member of nigiri sushi, but before WWII, it was seen as a lower quality fish and wasn’t used as a topping in high-end sushi. When there was a shortage of high-end sushi toppings, chefs had no choice but to use kohada, and in order to avoid the impression the customer may intuitively get from being served kohada, the chefs used methods like “kazari bocho” (a cut that makes the piece more beautiful) before making the sushi piece.

Kohada goes by various names depending on how mature the fish is. In Kanto, young fish 4-5 cm long are called ‘shinko’. At 7-10 cm, it is called kohada. Once the fish grows to 13 cm it’s called Nakazumi. 15 cm or more the fish is called konoshiro.

Among these, kohada is the most popular sushi topping. However, when grilled, kohada has a foul smell and even simmering in hot water isn’t ideal because of the many bones. That’s why kohada is a rare fish that is only prepared by sujime (marinating in vinegar) and only served as a sushi topping. However, the natural flavor of ingredients isn’t obvious when those ingredients are raw, so when prepared as a sushi topping, kohada it is always first salted (Shiojime), left for some time, then marinated in vinegar (Sujime). This seasoning requires proficient skill and that is why it tests a sushi chef’s skill.

Shinko, the young version of kohada, is a very special sushi topping. It can only be caught between June and August, and it is the only sushi topping called “Kaorimono” (aromatic). Since it is small, one piece of sushi is made with two or three shinko filets. The first shinko of the season is extremely valuable and sells at high prices (sometimes even more than US $1400 per kg), which means it is also expensive to order at sushi restaurants, but there are many sushi fans who look forward to shinko at that time of year.

Kohada is procured from all over Japan, such as Ariake in Saga, Mikawa Bay in Aichi, and Amakusa in Kumamoto, and fish that are about the same size with the same fat distribution are selected. The way the fish is salted, the amount of salt, the marinating time, etc. are all adjusted slightly depending on the amount of fat on the fish and the weather, among other factors. It is first salted (coarse salt is used because refined salt makes the flavor too strong) to expel excess moisture, then it is marinated in vinegar (sujime). Furthermore, a delicate sense is needed to succeed at sujime, requiring so much care that only certain chefs are entrusted with the task.

Kohada that has been prepared with this method doesn’t have a strong fishy smell and the fat tastes even sweeter than it looks. Depending on the size of the fish, anywhere from one filet to half of the fish may be top one piece of sushi. Kohada is in-season and delicious from September to November. Many customers look forward to kohada at this time of year. Not only is it the representative of silver-skinned fish, but it can also be called a ‘blessing’ of Edo-style sushi prep work. If you’re going to take the time to go out for sushi, do yourself a favor and make sure to try this topping.

Trivia: Kohada served at conveyor belt sushi restaurants are actually Konoshiro imported from Taiwan. Kohada imported from Southeast Asia and marinated with vinegar are used most often so there is no opportunity to enjoy the delicate flavors.

WHAT IS WA-BOCHO (JAPANESE KITCHEN KNIVES)?