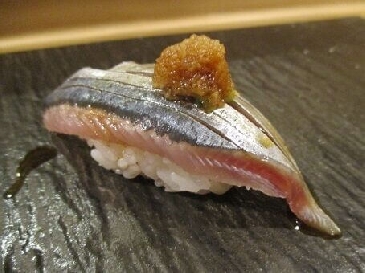 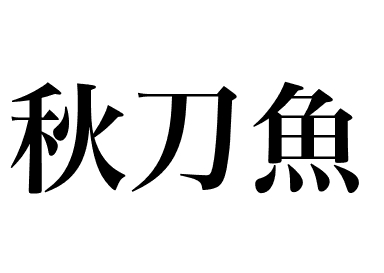 【Nigiri sushi: Hikarimono】
What is Sanma?
Pacific saury is relatively shallow-water fish that live at approximately 20 m below the surface and migrate in schools. However, sometimes they may jump over the surface of the sea, much like Flying fish, when escaping from natural enemies such as tuna. They live in water temperatures of 7 to 24℃. More specifically, this fish prefers water temperatures between 10 to 18℃, and it lives on a diet of zooplankton, krill, fish roe, etc. Its main spawning season is winter, but it may breed during other seasons as well. However, as has become a common theme, Pacific saury catch has been sluggish in Japan in recent years. Presumably due to rising seawater temperatures and increased activity in foreign fishing ships, there is a need for further efforts to enforce international fishing controls and recovery of resources.

The females lay their eggs in algae that float on the ocean surface. They hatch and fully mature in about one year. The lifespan of this fish is two years and the large ones that exceed 30 cm are at least one year old. A characteristic of Pacific saury is that they are phototactic and are attracted by light. Saury ships use this behavior by illuminating lights that lure fish to fishing spots and driving the schools they attract into nets. Pacific saury fishing starts at the beginning of July. The Pacific saury hauled to the fishing ports of the eastern parts of Hokkaido are highly valued as the first of the season and have become a valued brand. Once September comes along, they migrate south for spawning grounds and are hauled to the fishing ports of Iwate or Miyagi prefectures or Choshi city in Chiba prefecture. They can be fished between July and November.

What does Sanma nigiri sushi taste like?
Sushi with saury fish has been disdained in traditional Edomae sushi, however, they can be seen everywhere nowadays. Tasty fatty autumn saury fish are cut with Kazari boucho (small cuts to make the topping look beautiful) and then served with grated ginger and green onion.