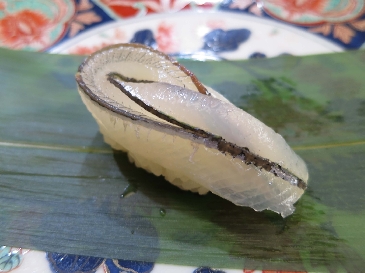 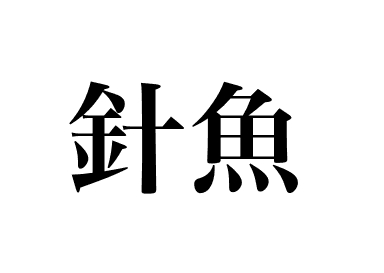 【Nigiri sushi: Hikarimono】
What is Sayori?
Sayori can be found on all coasts in Japan and live on the surface layer of both inner bays and open seas. Sayori isn’t as blue as saba or aji, but it does have a blue tint to it, so it is considered a ‘hikarimono’ sushi topping.

What does Sayori nigiri taste like?
Japanese halfbeak (Sayori) has been long loved by the Japanese as an ingredient in Edomae sushi, and its appearance ushers in the start of spring. Beautiful flesh with light flavor and distinctive aftertaste. Used to be served after vinegared and salted in order to get rid of the fishy smell but nowadays it is served raw. Sweet oboro flakes are put in between shari and fish. Sayori that exceed 30 cm in length are called “Kannuki” and are valued as sashimi for the rarity, but sushi chefs prefer the smaller size (katamizuke) that is made into sushi.

Trivia 1: Internal organs of the Japanese halfbeak are all black and have a strong smell. Without taking them off carefully during a preparation, it would reduce the deliciousness by half. By the way "someone who is like a Japanese halfbeak" is used to describe someone who is blackhearted contrary to how he looks.

Trivia 2 : There are certain toppings that require detailed work to prepare called “Saiku Sushi”, and one of the most common is Japanese halfbeak (Sayori). The beautiful pattern on the surface of the skin and knots are made for rolling. It is one of the most attractive of the silver-skinned fish.

Related contents：
What is the difference between denbu and oboro?