Let’s take a closer look at the different types of sushi in Japan.

The common four types of sushi that every Japanese person knows of include nigiri-zushi, maki-zushi, chirashi-zushi, and inari-zushi. If you add in the local forms of sushi, there are as many types as there are regions. The most famous of these is nigiri-zushi, and it is what most out-of-towners are referring to with the word “sushi”. 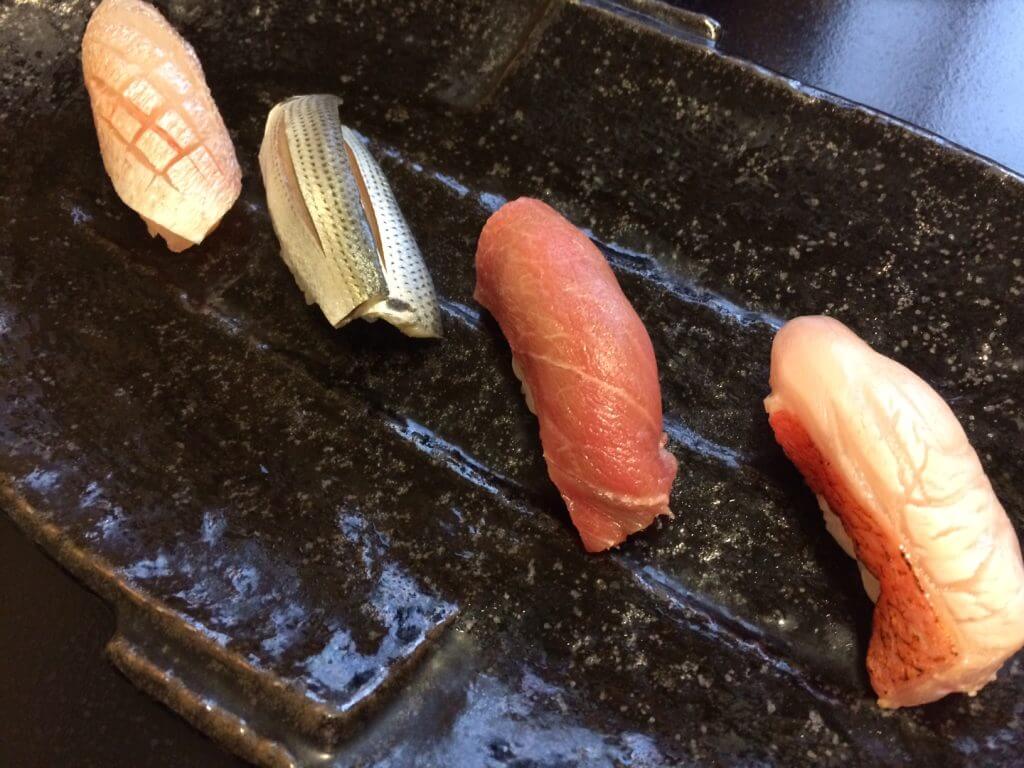 This type of sushi consists of placing a fish fillet or another topping on top of special vinegar rice, then pressing it by hand. You may be interested to know that salmon roe and sea urchin gun-kan pieces that are wrapped in seaweed aren’t rolled by hand like this, so some people don’t consider them to be nigiri-zushi. But the vinegar rice in these pieces is rolled by hand so wouldn’t that mean it’s one type of nigiri-zushi?!

One of the characteristics of hoso-maki is that the way it is cut and served differs depending on the ingredients inside. For example, Kanpyo-maki is rolled so that the cross-section is round, cut into 4 pieces, and then presented on its side. Tekka-maki and Kappa-maki are rolled into square shapes, cut into 6 pieces, and then served standing on the ends so that the red and green colors are visible. (It has been this way for many years, but the reason is not certain) Let me start by introducing the famous types of skinny rolls. 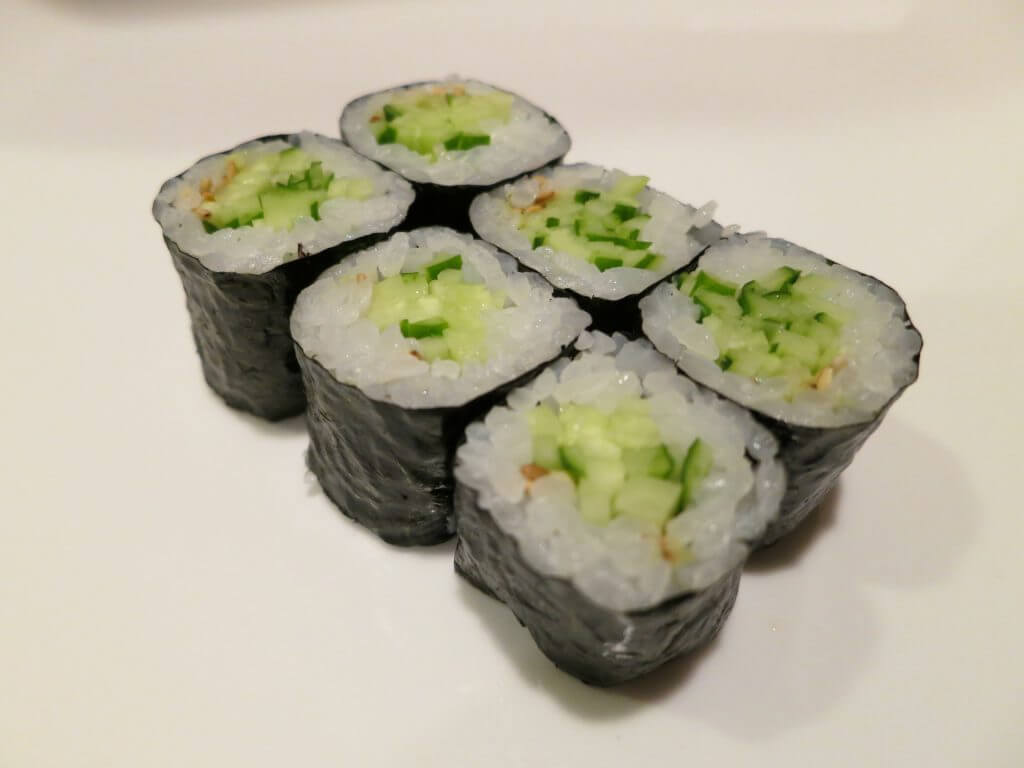 Cucumber is cut into long strips and a few of these strips, seasoned with white sesame seeds, are rolled into seaweed. 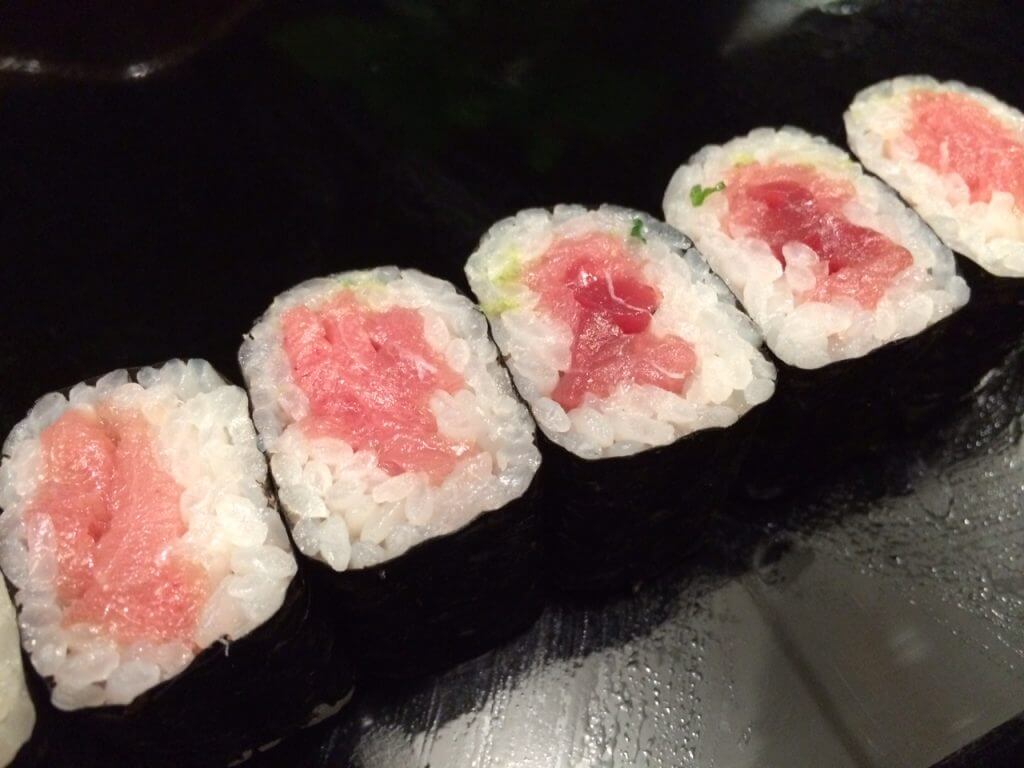 Most people already know the center of this roll is tuna. 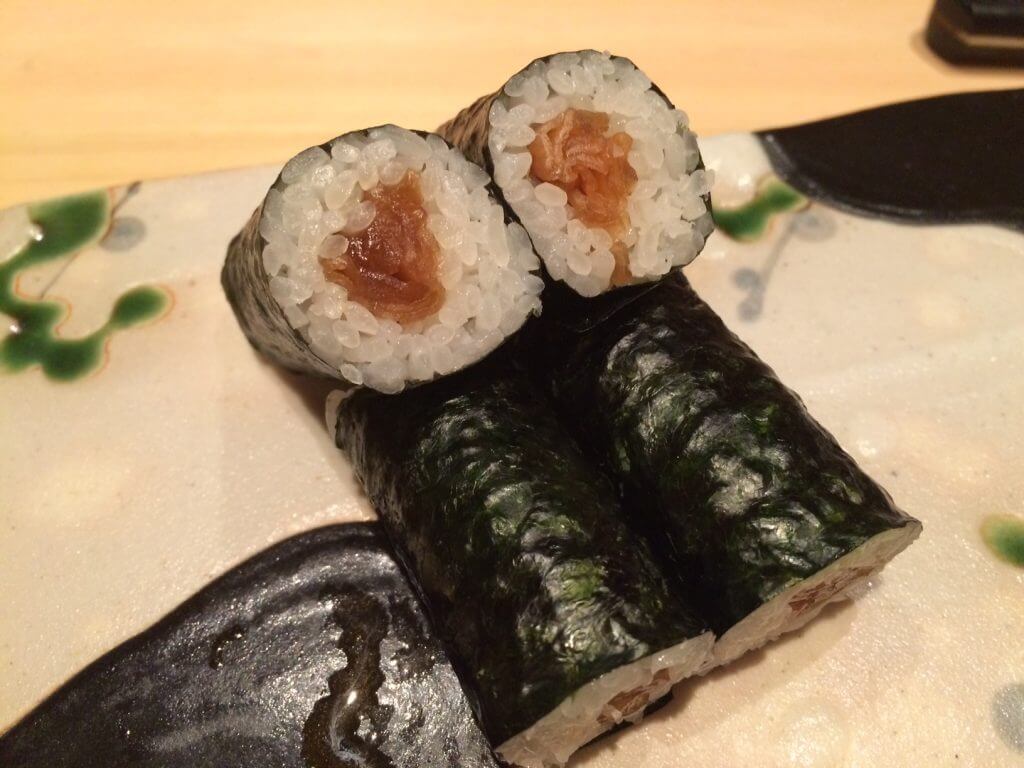 A seaweed roll with sweet, boiled Kanpyo* in the center.

*Kampyo is the white flesh of the bottle gourd, which is cut into long strips, as if peeling it, then cut so it looks like strings, then laid out to dry, perhaps in the sunshine or hot air. 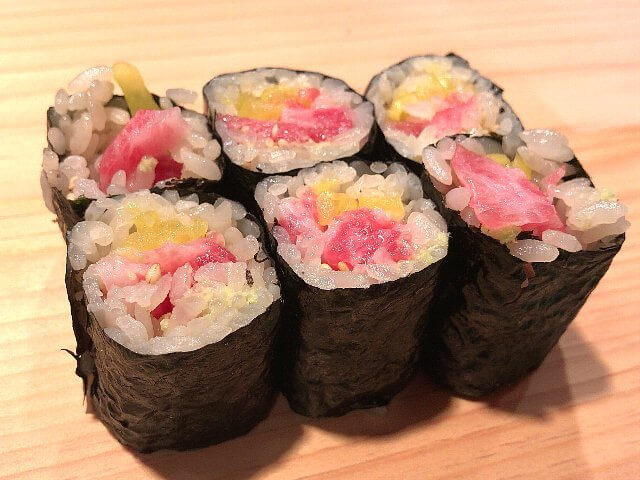 Chopped pickled radish is combined with sukimi* to form the center of this seaweed roll. The pickled radish has a refreshing flavor and matches perfectly with the thick fat of the tuna.

*Sukimi refers to a thin slice of the fish from which the meat between the muscle and the fat remaining on the back of the skin is cut away. 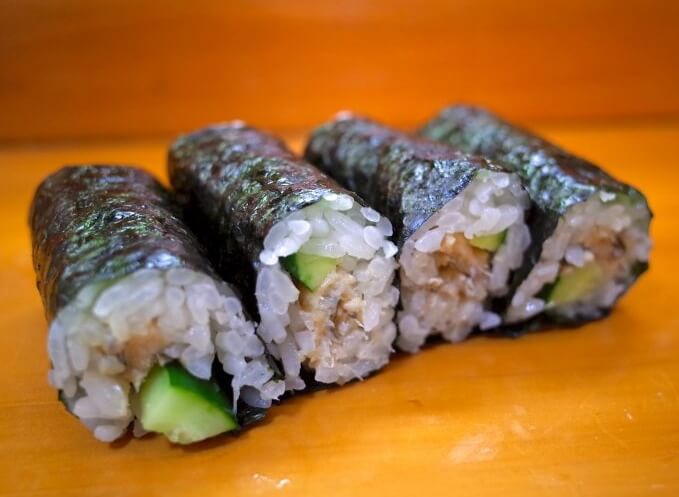 Finely sliced conger eel is combined with cucumber, then wrapped in seaweed. 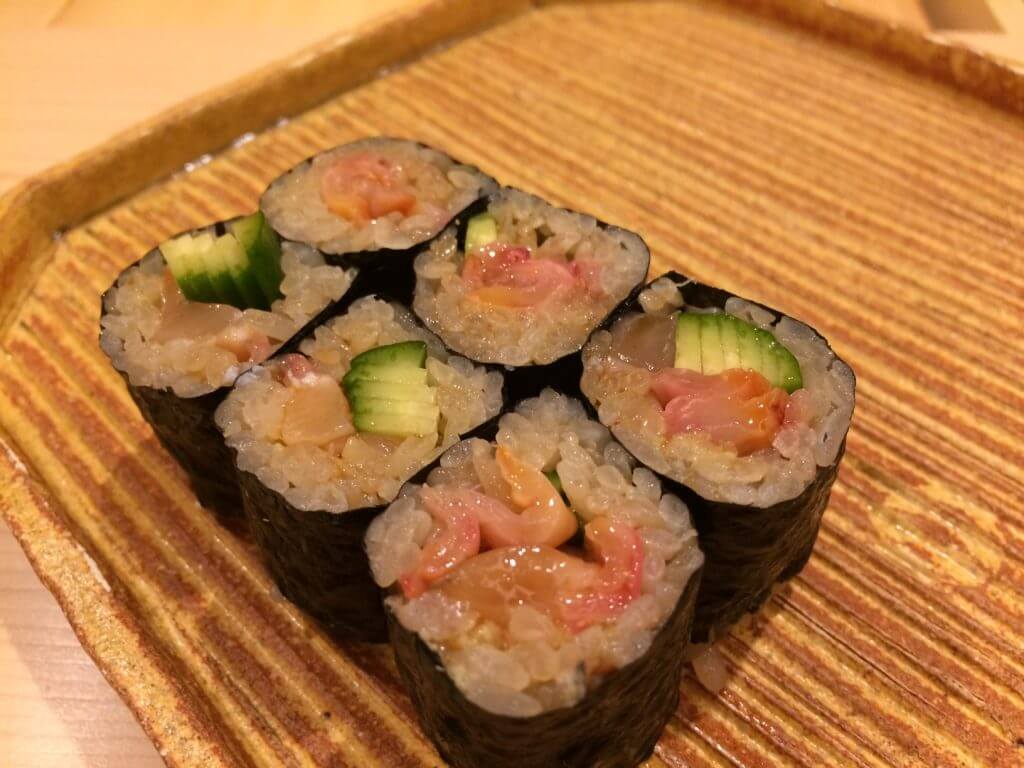 A seaweed roll with the mantle of the ark shell and cucumber in the center. 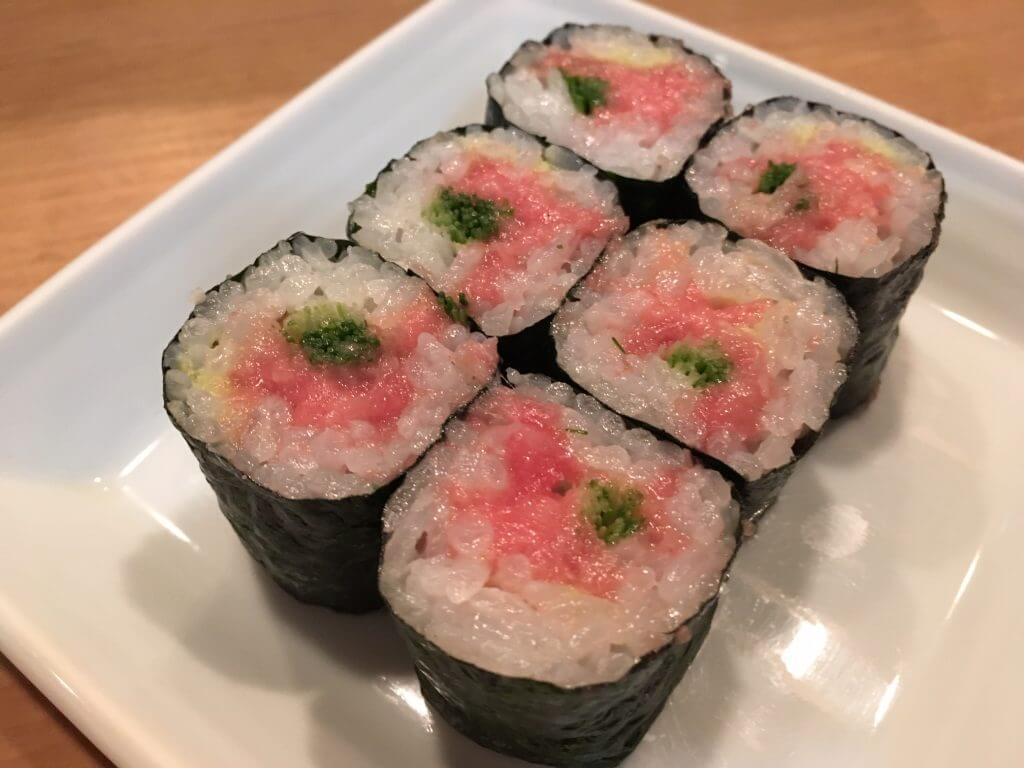 Chopped green onion is combined with tuna sukimi to form the center of this seaweed roll.

＊There is a lot of flesh on the middle bone (spine) and the surrounding area for tuna and the like. This is called “nakaochi”. Scraping the meat from this area surrounding the spine is known as “negitoru”, which is where the word “negitoro” comes from. In other words, the name “negitoro” is not actually from the words onion (negi) and tuna belly (toro).

Chopped pickled radish and a shiso leaf are seasoned with white sesame seed and wrapped in seaweed. 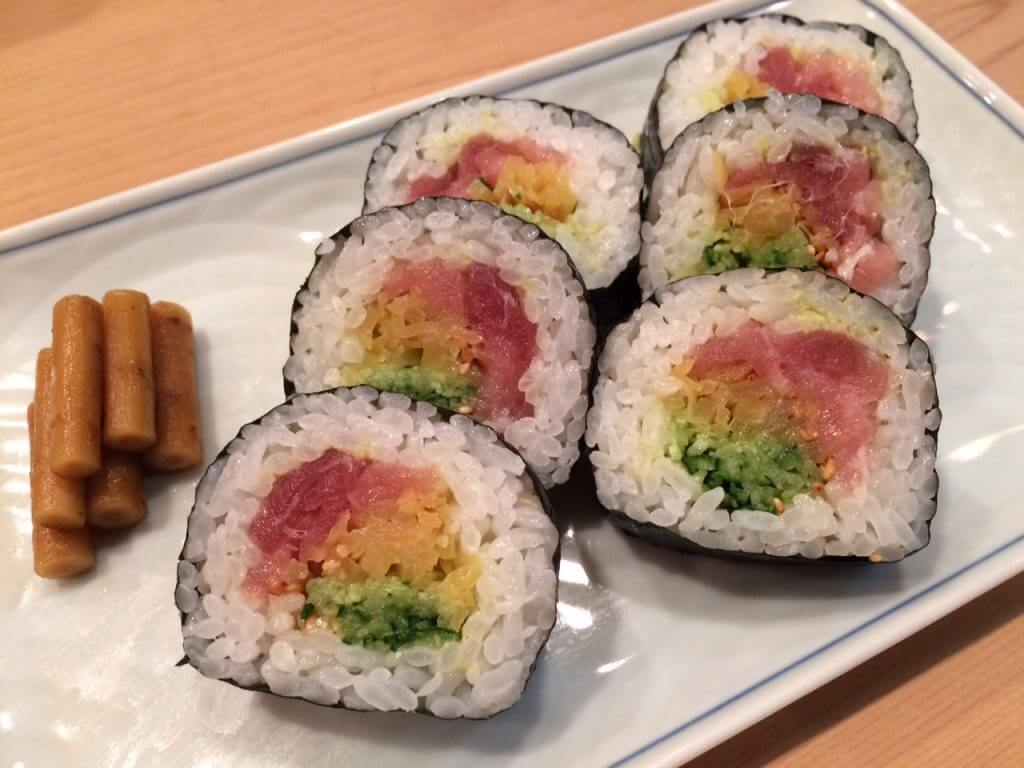 These sushi rolls are thicker. In the Kansai region futo-maki are made with 1 and a half sheets of nori seaweed while in the Kanto region only one sheet is used. Also in Kanto the nori is toasted, but it’s not in Kansai. The reason for not toasting is that soft, raw nori that has only been dried is easy to roll vinegar rice in and doesn’t tear easily. The typical futo-maki roll is the Goshu-goshoku (5 types, 5 colors) including shiitake mushrooms, kanpyo, egg omelet, minced fish, and spinach. In Kansai there is more vinegar rice used so it is rolled very thickly, but in Kanto the ingredients and vinegar rice are balanced and the roll is thinner. 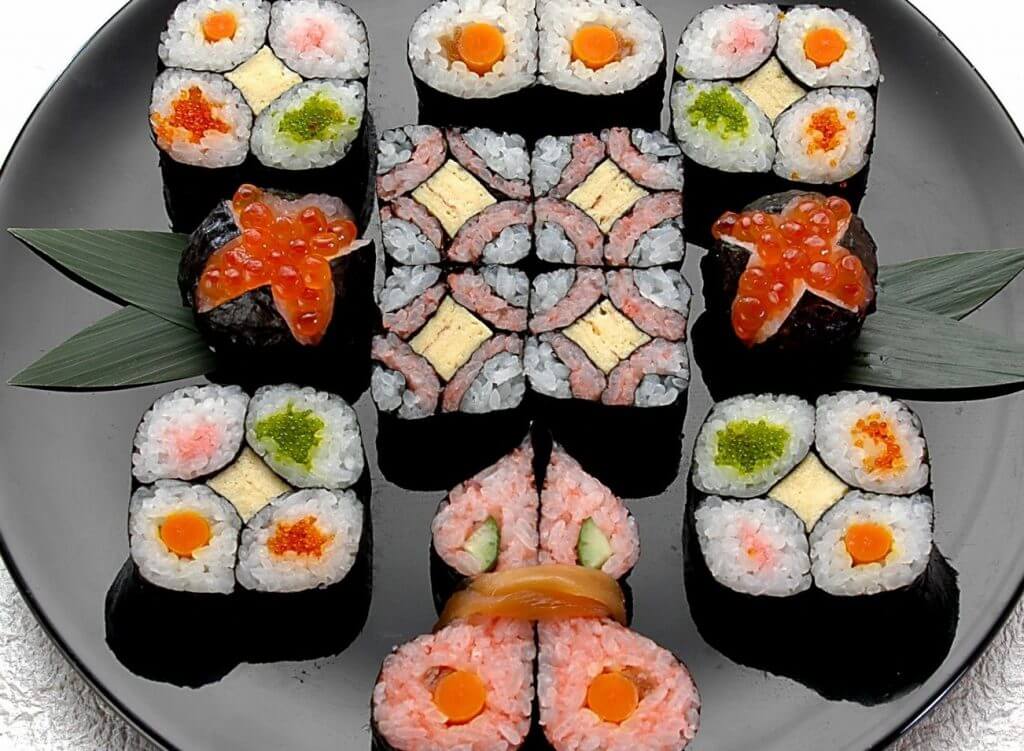 The cross-section of the cut pieces is made to look like flowers, designs, or family crests. Priority is given to the visual aspects more than the taste. 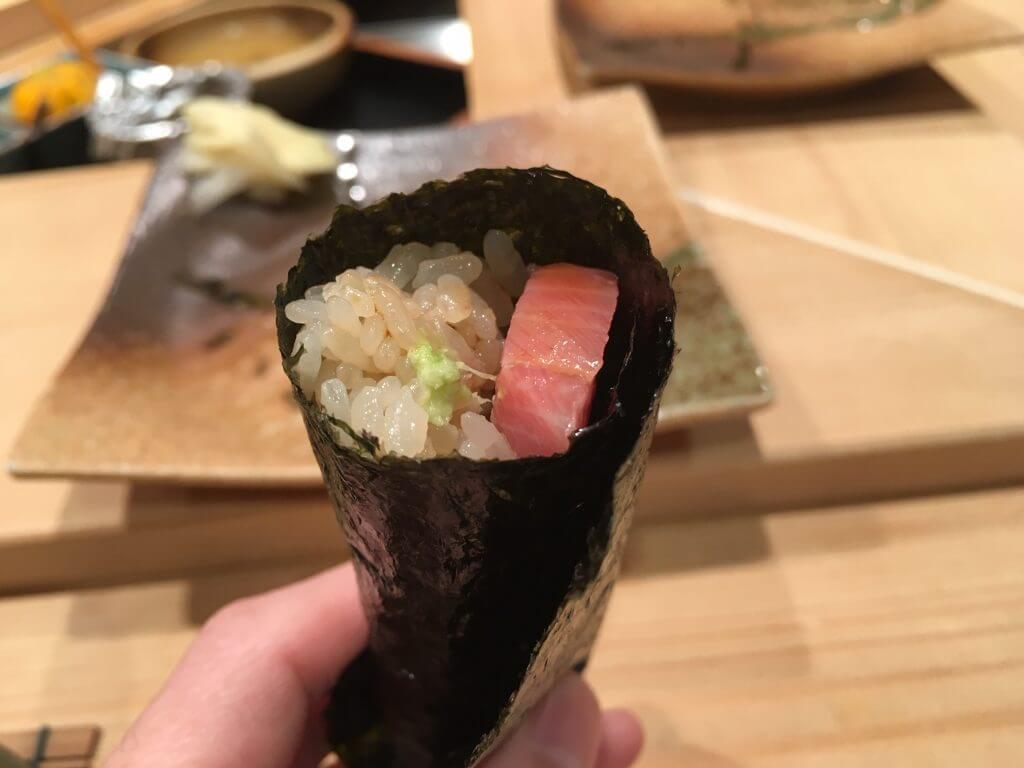 This is a new, fun way to eat sushi, and it’s certainly the easiest way. One way is to roll it very thin, like Hoso-maki, and another is to roll it wider (flower bouquet te-maki). Any toppings used for Hoso-maki or gunkan-maki (battleship rolls) can be used.

＊In battleship rolls and skinny rolls, the seaweed absorbs the moisture of the rice as time passes. Soft seaweed that has absorbed moisture doesn’t allow you to enjoy the essential flavor of the seaweed, so the rolls should be eaten as soon as they are made. 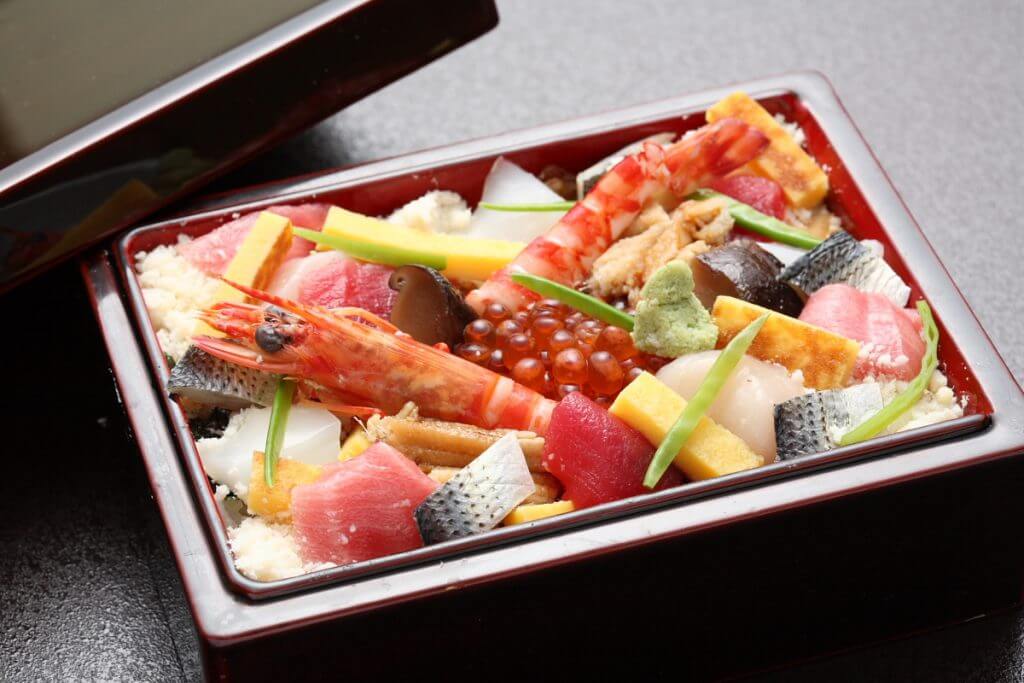 The Chirashi-zushi you find in Kanto has a vinegar white rice base with a variety of toppings (seafood, egg omelet, dried gourd shavings, shiitake mushroom, minced fish, pickled ginger, etc.), served in a container, often a square nesting box. “Chirashi” means “scatter” in Japanese and Chirashi-zushi is called this because the ingredients are scattered over the vinegar rice. This is called “Fukiyose (medley) chirashi” or “Nama (raw) Chirashi”. Large cuts of the ingredients are often used, creating a bold dish.

“Bara-chirashi” is white vinegar rice topped with ingredients that have prepared in the Edo-style by marinating in vinegar, boiling, or marinating in soy sauce, egg omelet, sweet and salty boiled shiitake mushrooms, dried gourd shavings, and minced fish, sliced up thinly.

Kanto Chirashi-zushi (fukiyose-chirashi or bara-chirashi) was made from converting nigiri-zushi, so the vinegar rice is made in the same way, with less sugar and kept a bit warm. If you wait too long, it gets cold and hardens. One of the charms of this dish is using the same vinegar rice as the sushi, for a refreshing flavor.

On the other hand, the chirashi-zushi in Kansai is called “Bara-zushi” or “Gomoku-zushi.” The main ingredients are vegetables, mixed in with the vinegar rice, then topped with boiled octopus and shrimp, and grilled conger eel, boiled and chopped green beans, omelet cut into thin strips, chopped seaweed, gari (ginger), or red pickled ginger. It’s normally eaten cold. Therefore, it is made by slowly cooling the vinegar rice.

It seems that most regional variations of chirashi-zushi have their roots in “bara-zushi.” Historically, bara-zushi is much older, and the Kanto version of chirashi-zushi is a rather new way of eating the dish. The raw toppings are also a post-war addition. 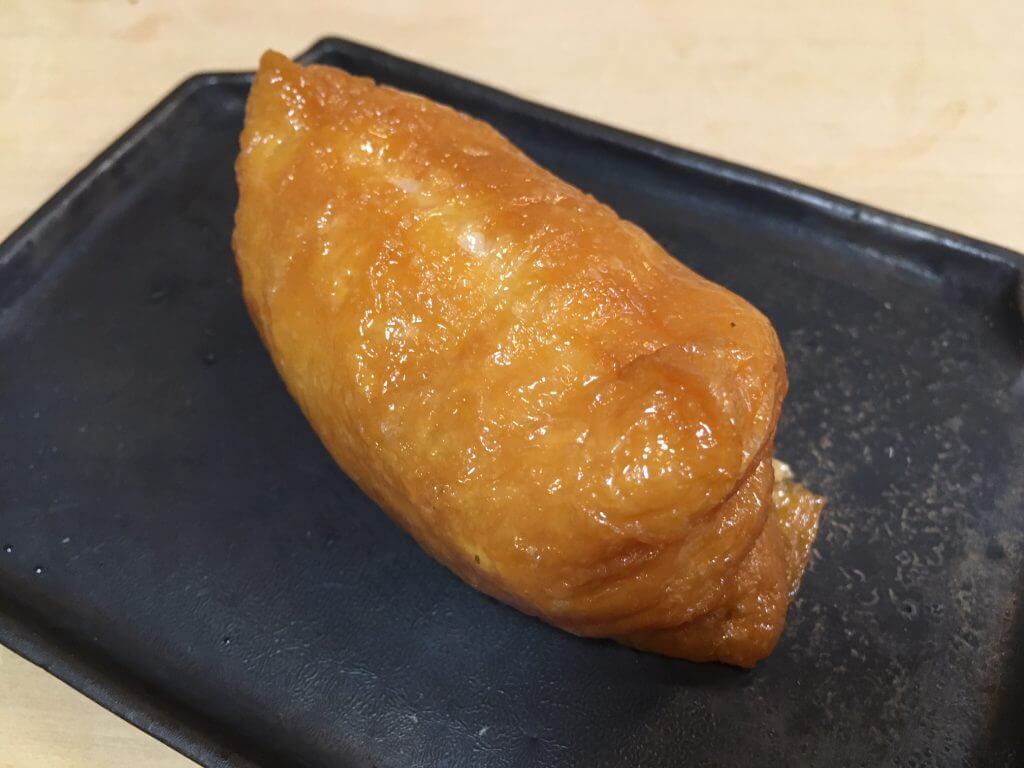 Fried bean curd and vinegar rice (or vinegar rice mixed with boiled down carrots, shiitake or similar ingredients). Inari-zushi is made with only two ingredients, and it is that simplicity that allows the chef to devote their ingenuity to the dish, creating a unique flavor. It is said to have first appeared at the end of the Edo period, but the origin is uncertain. 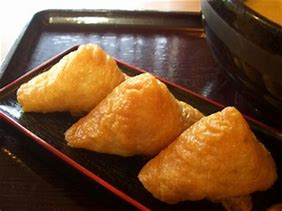 The shape of inari-zushi differs from that resembling a straw bag in the Kanto and Eastern Japan, where rich sweet and salty flavoring is used, and the triangular shape of Western Japan. 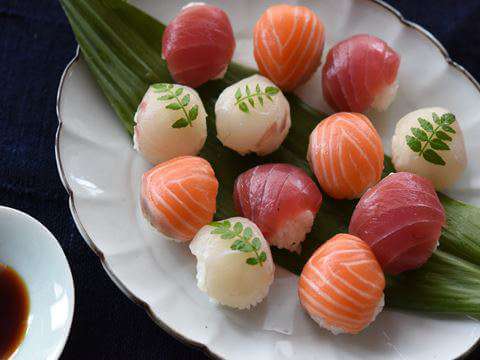 Like its namesake Temari-zushi is small and shaped like traditional Japanese toy balls. It is a type of Sosaku-zushi (sushi not restricted by Edo-style rules, allowing for creativity). Some say this type of sushi originated in Tokyo. 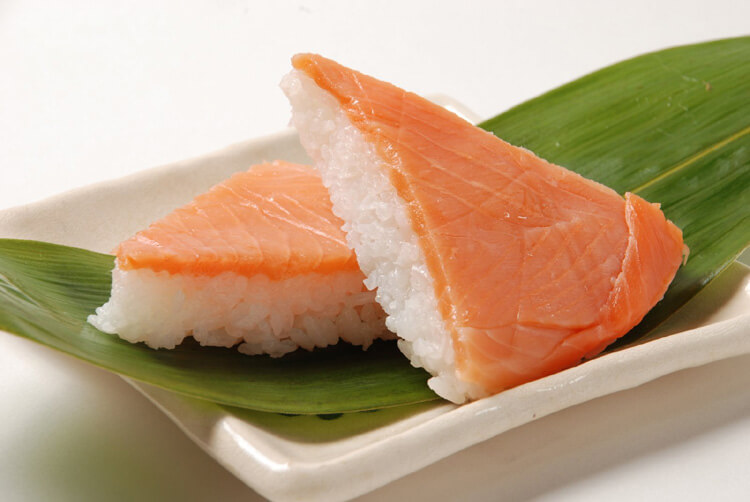 Masu-zushi is from Toyama. Vinegar rice is spread on a bamboo leave and vinegared masu salmon (Sakuramasu) is put on top. 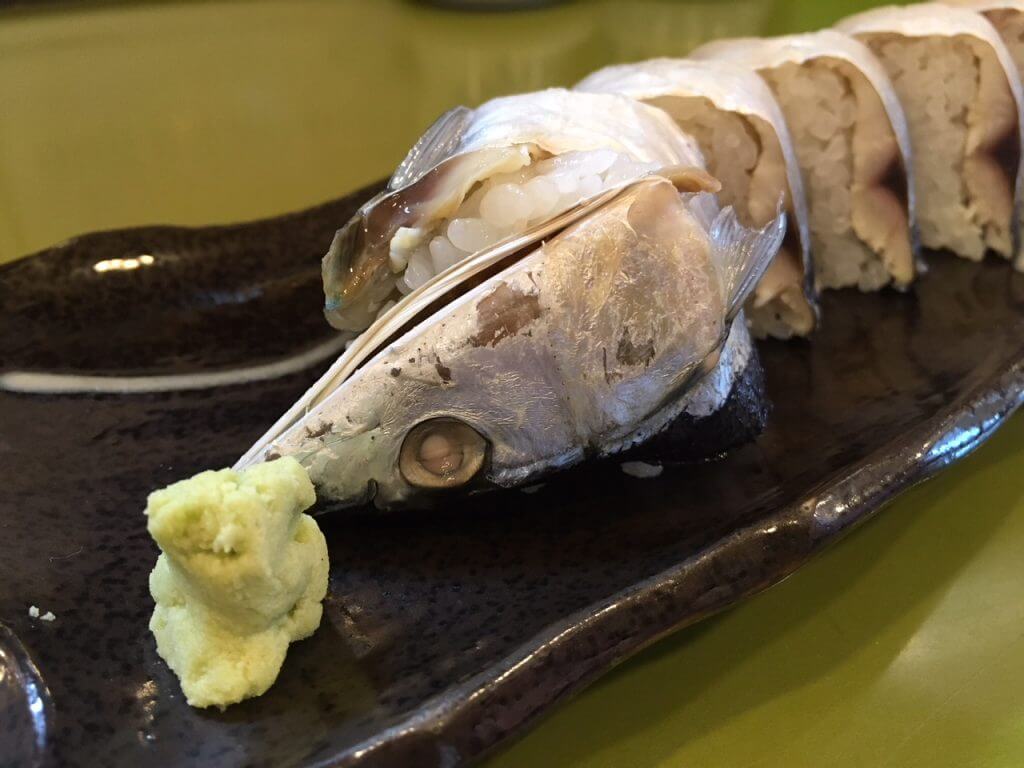 A whole saury is sliced down the back, then spread over vinegar rice, then pressed a bit to create a shape. The “Pacific Saury Sugata-zushi” is representative of the Kumano region. 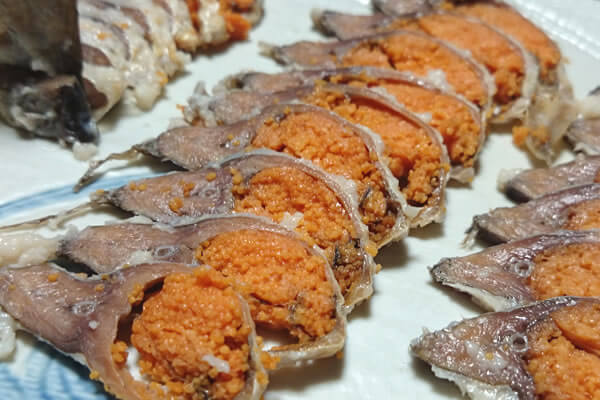 Shiga is known for its delicious Funa-zushi, made from the crucian carp of Lake Biwa. This is one type of Nare-zushi (fermented sushi) that retains the original sushi form.

As you can see, there are various types of sushi throughout Japan, and some are not well-known outside of certain regions. If you have the opportunity to visit any of these regions, be sure to have a taste.

Dishes you may find at sushi restaurants that are, strictly speaking, not sushi 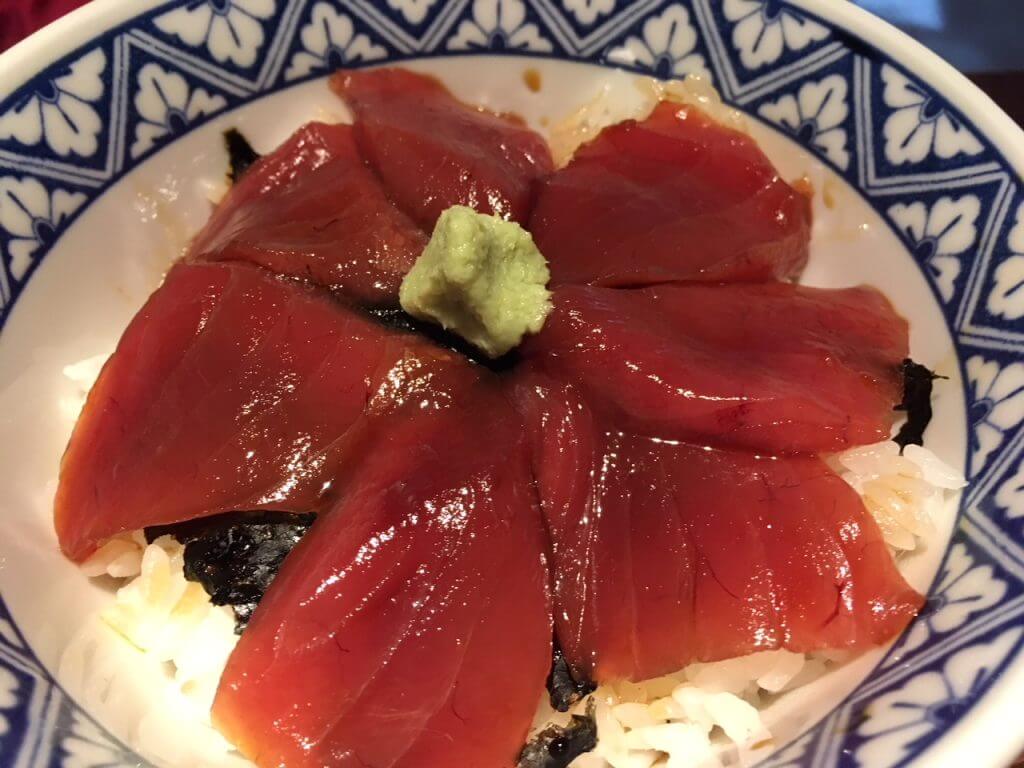 This is a rice bowl, generally served with warm rice (normal, steamed rice), with a variety of seafood sashimi on top. However at sushi restaurants, vinegar rice is used instead of white steamed rice and it’s usually called a Seafood Bowl as well. So, it is difficult to distinguish between the two. Ingredients may include tuna, salmon roe, sea urchin, crab, squid, etc. However, toppings made in the Edo-style are not used. 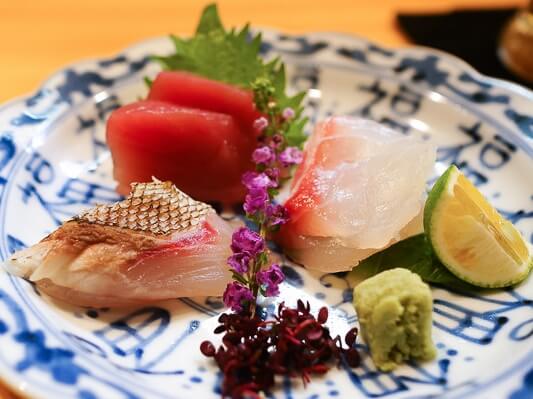 This is not categorized as sushi. Seafood is cut thinly in the raw form, then eaten with soy sauce and wasabi. It’s also called “otsukuri.” 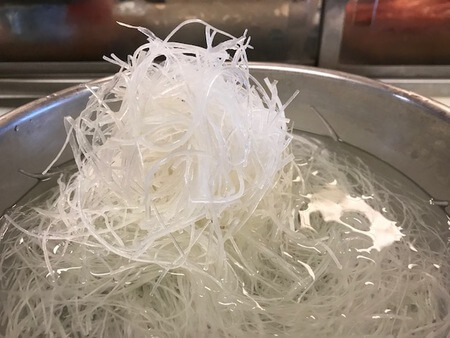 Next to the sashimi will be a garnish. The white part is daikon radish. The orange part is carrot. The green leaf is a shiso leaf. Others may include wakame seaweed, beni-tade (red polygonum), chrysanthemum, inflorescence of shiso, etc. There are various types of garnish including some that offset the odor of raw fish, some with antibacterial effects that prevent damage to the sashimi, and some types that help digestion. Garnishes that especially provide flavor are called “Yakumi.” For example, wasabi or ginger.

The lack of vinegar rice is not the only difference between sashimi and sushi. With sashimi, the crunchy texture is prioritized, so the fish is eaten as freshly as possible. This is completely different from Edo-style sushi, where the idea is to mature the topping and eat it when the umami element is at its peak. There is not only one kind of sushi.

Incidentally, sashimi has been eaten since long ago, but when fish is just displayed at the shop, it’s not clear what type of fish it is. So at that time, the meat was served pierce with the tail and head of the fish. That’s where the name “sashimi,” which means “pierced meat” came from.