There are a number of specific topping categories for Nigiri-sushi exclusively found in sushi restaurants, including Akami, Shiromi, Hikarimono, Nimono, and Shellfish. Let’s take a closer look. 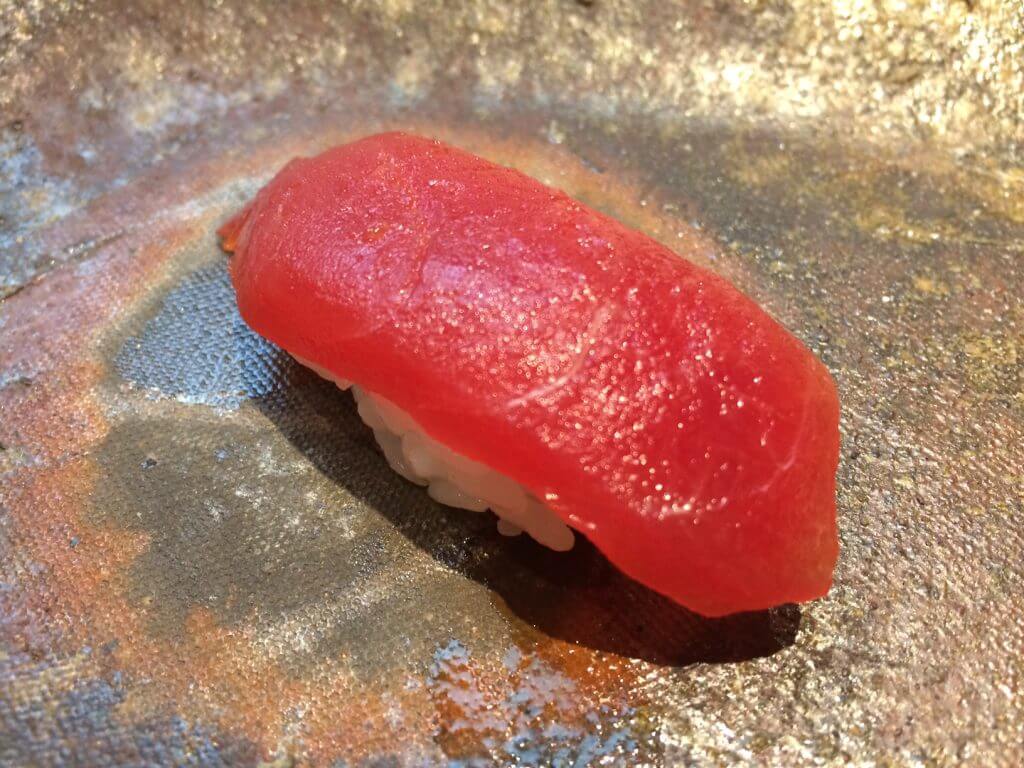 Fish with red meat. The major Akami fish include tuna and bonito. The meat gets its red color from the high hemoglobin and myoglobin content specific to migratory fish. Tuna and bonito are served in thicker cuts with a focus on firmness and sticky texture. As for Akami (red fish) served in the form of Nigiri sushi, there are Kuro maguro, Minami maguro, Mebachi maguro, Kihada maguro, Bincho maguro, Katsuo, Makajiki, etc. 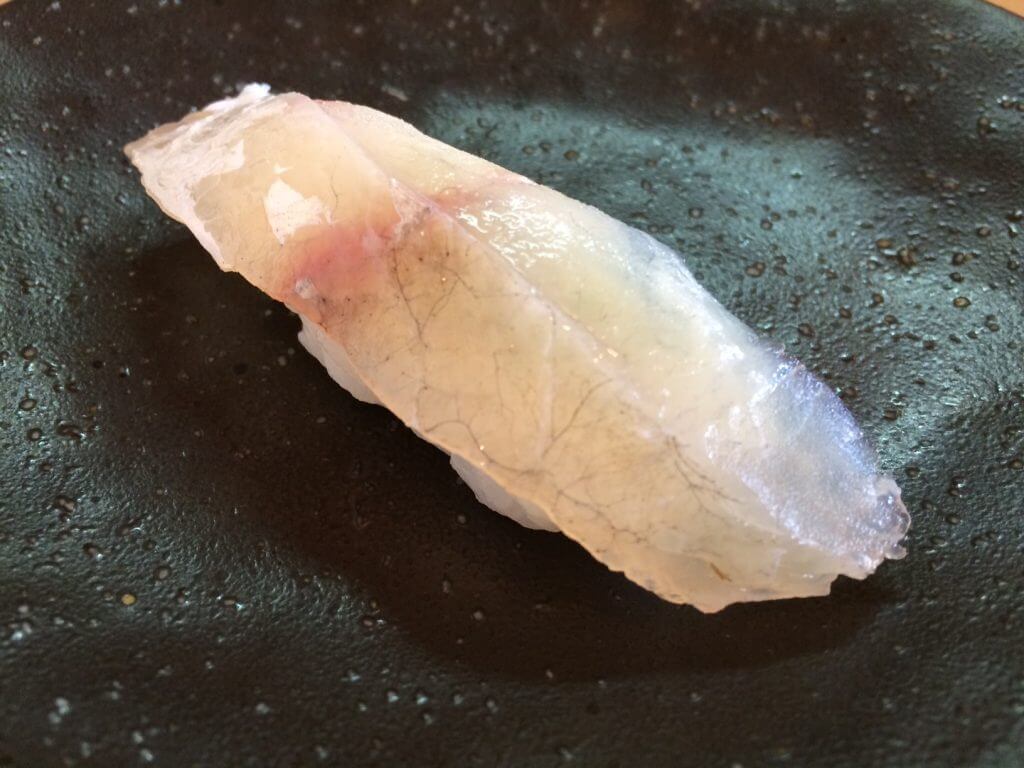 Fish with white meat. The fat content in Shiromi is generally low at about 1.2% in flounder and 4.7% in sea bream. Almost all white fish are light in color and have an elegant taste. Furthermore, the rigor mortis takes over slowly and lasts for a long time, so it maintains the crunchy texture longer. Unlike Akami, the Shiromi fish don’t really migrate. You can call yourself a sushi expert if you’re able to recognize which fish it is just by looking at the cut. As for Shiromi (white fish) served in the form of Nigiri sushi, there are Hirame, Tai, Makogarei, Hoshigarei, Kanpachi, Kinmedai, Suzuki, Shima aji, Hiramasa, Isaki, Fugu, Nodoguro, Sawara, Buri, Akaamadai, Kawahagi, Sake, Tachiuo, etc. 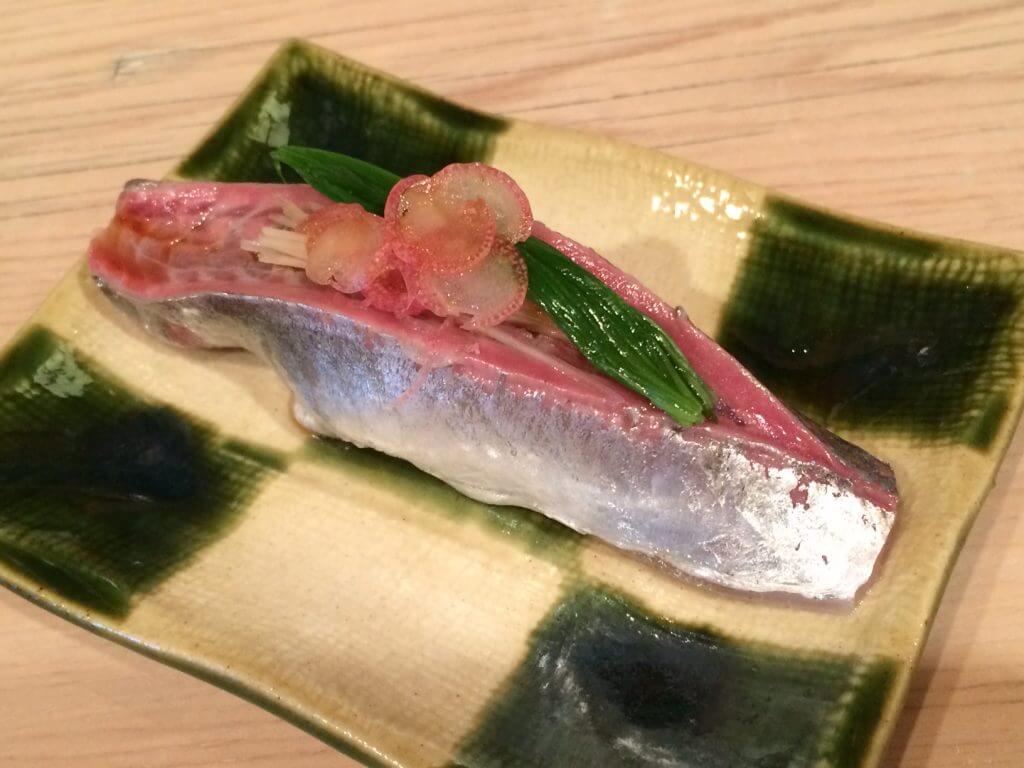 Hikarimono includes horse mackerel, mackerel, sardines, sillago, and gizzard shad, generally referred to as bluefish (shiny bluefish). Silver-skinned fish all have high-fat content. It is approximately 7% in gizzard shad and horse mackerel. It is about 16% in mackerel. The taste is heavy. Many of the fish in this category lose their freshness quickly, so the preparations differ greatly from restaurant to restaurant. They say that you can tell how well a restaurant is doing by which Hikarimono they serve. This may be why many restaurants make sure to work hard on their silver-skinned fish. As for Hikarimono (silver-skinned fish) served in the form of Nigiri sushi, there are Kohada, Aji, Saba, Kasugo, Kisu, Sayori, Sanma, Iwashi, etc. 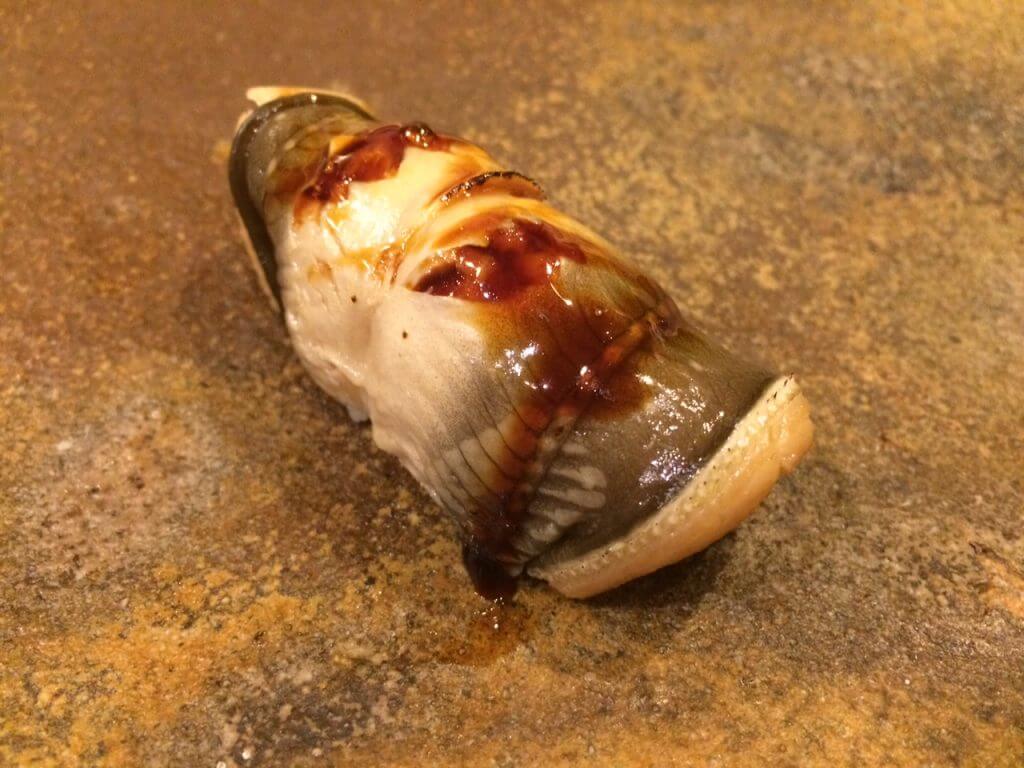 The stewed toppings are the epitome of Edo-style sushi work efforts and technology. It’s hard for laymen to imitate this flavor. Another characteristic is that they are eaten with sweet, boiled down Tsume. The major types of nimono include conger eel, squid, abalone, clams, and squilla. Squid and abalone are also prepared raw as sushi toppings, but at traditional Edo-style sushi restaurants, stewed abalone and stewed squid are used as the toppings. As for Nimono (stewed items) served in the form of Nigiri sushi, there are Anago, Shako, Tako, Nihamaguri, Unagi, etc. 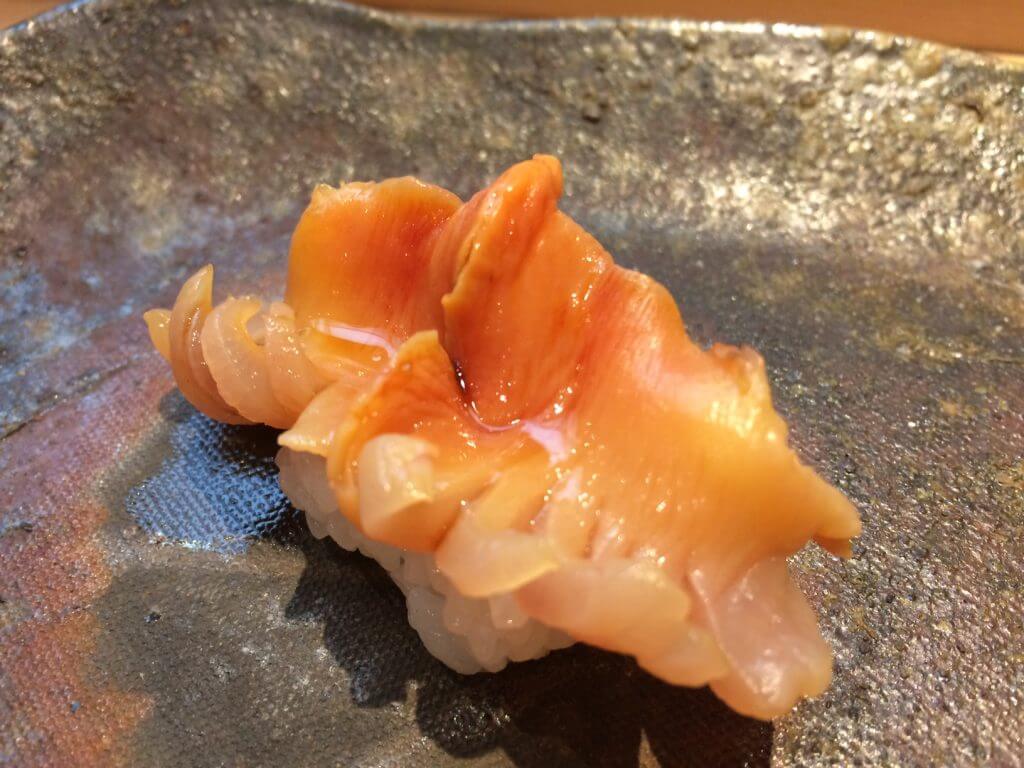 Surprisingly, the most expensive sushi is shellfish. Shellfish flavor is somewhere between the rich flavors of akami and the subtle taste of shiromi and it plays the role of cleansing the palette. The texture, flavor and fragrance differ greatly depending on the type and most people either love or hate Shellfish toppings. They include a large volume of umami components, such as Succinic acid. As for Kai (shellfish) served in the form of Nigiri sushi, there are Akagai, Mirugai, Torigai, Hokkigai, kaki, Awabi, Hotate, Tairagi, etc. 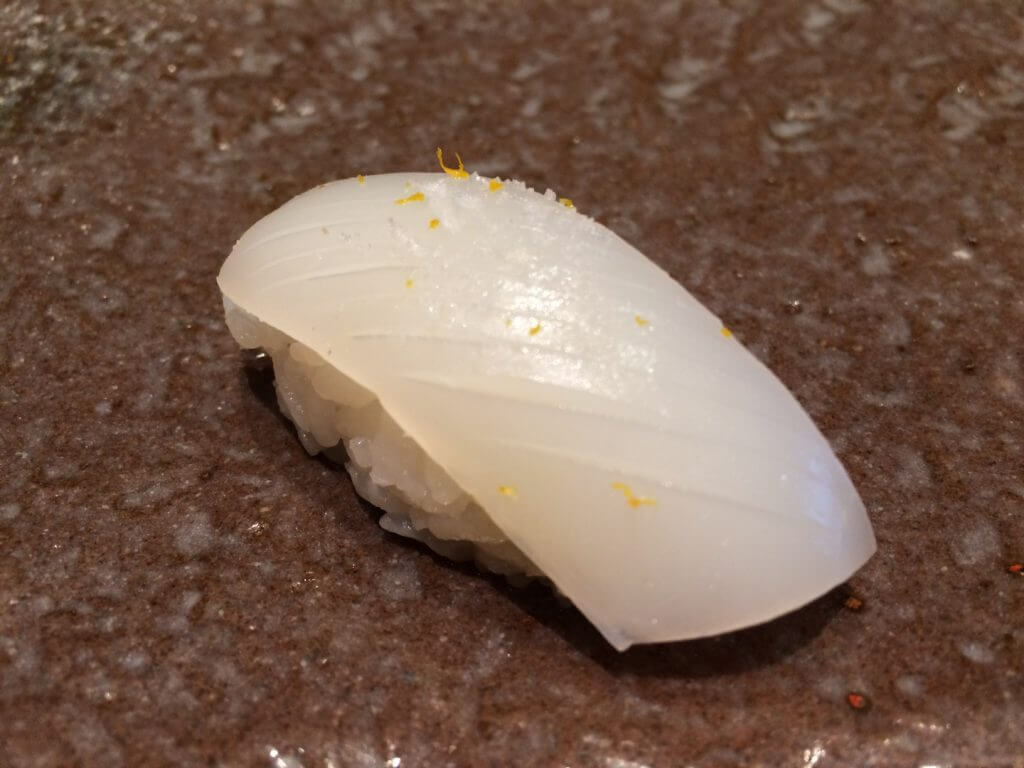 There are over 450 types of squid in the world and over 100 types just in the seawaters around Japan. Squid is essential to Japanese cuisine and is found in many recipes for home cooking. It is a representative of ingredients for common people that is both affordable and delicious (although squid is starting to become a more expensive ingredient due to scarcity). There are also many different types of squid used as sushi toppings, and certain squid are used during certain seasons, each with a unique flavor. As for Ika (squid) served in the form of Nigiri sushi, there are Aori ika, Sumi ika, Kensaki ika, Yari ika, Surume ika, Hotaru ika, etc. 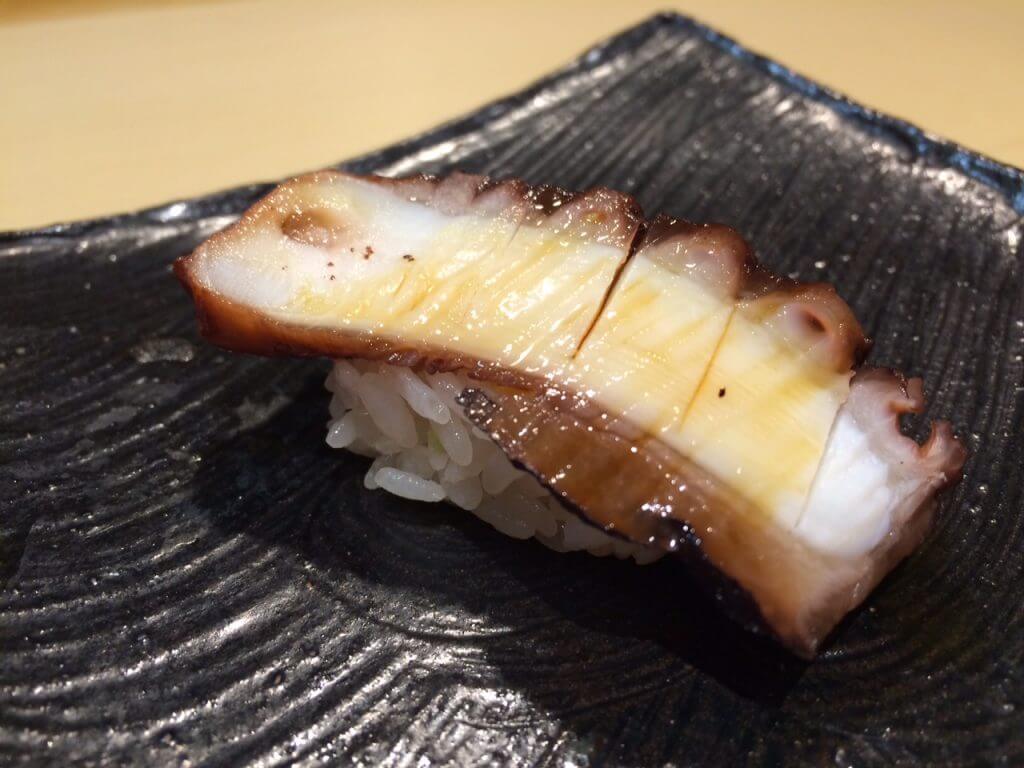 Octopus is a popular sushi topping at every sushi restaurant. However, preparing an octopus from its raw state is very labor-intensive. Some restaurants boil it, while others use “sakura-ni*.” Elaborate efforts are made at the restaurant in order to prepare a topping that can be bitten through and emit a delicious fragrance. Needless to say, when prepared raw, it is thoroughly kneaded by hand. It may be stuck with the crest or wooden pestle of a kitchen knife, or boiled with roasted green tea, incorporating techniques from Kansai dishes. As for Tako (octopus) served in the form of Nigiri sushi, there are Madako, Mizu dako, etc.

*”Sakura-ni” refers to stewing octopus in sake, mirin and soy sauce to soften it, turning it into a shape that resembles cherry blossom (sakura) petals. 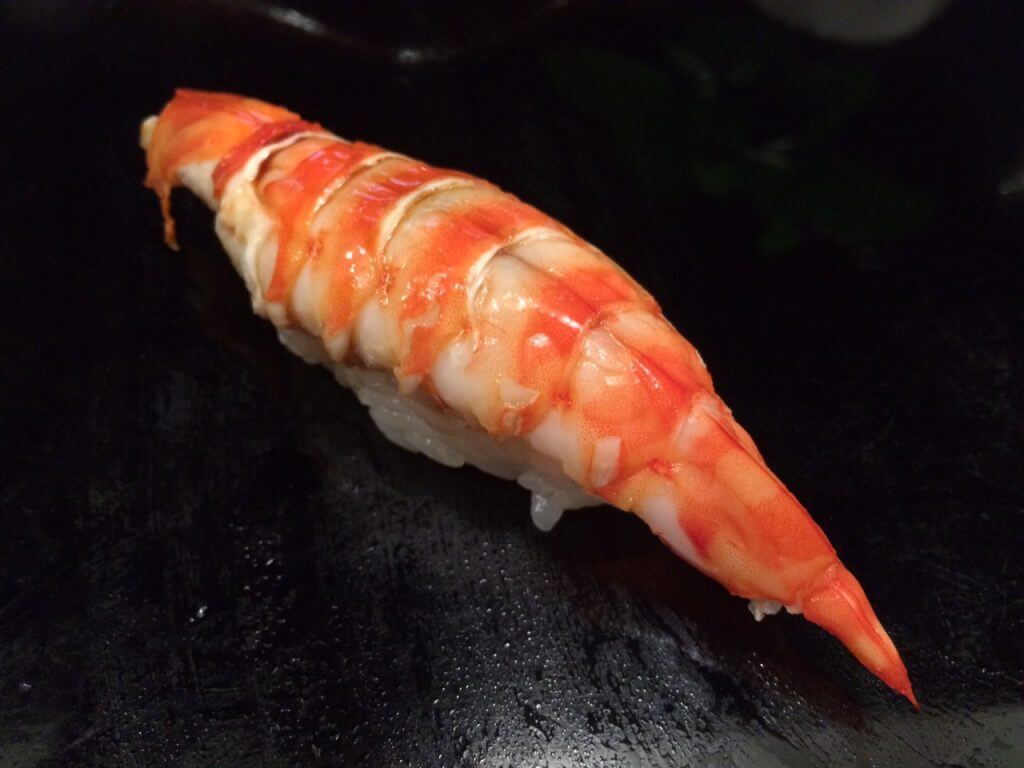 The sweetness of shrimp is stronger when eaten raw. There is still a sweetness remaining in boiled shrimp, but it’s weaker. Instead, the umami gets stronger and the texture is also completely different than when served raw. When boiled the fiber is more apparent and it can be bitten clear through. As for Ebi (shrimp) served in the form of Nigiri sushi, there are Kuruma ebi, Botan ebi, Shima ebi, Shira ebi, Ama ebi, Ushi ebi, Vannamei ebi, Guiana pink ebi, Mexico brawn ebi, Aka ebi, etc. 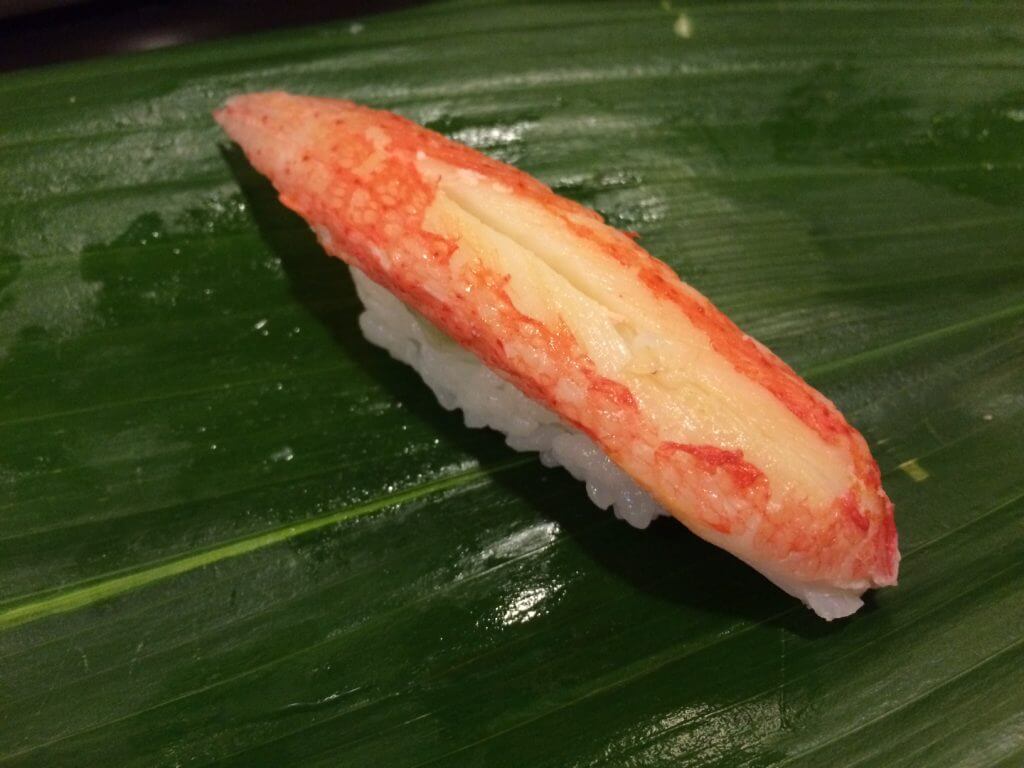 The crab wasn’t originally an Edomae (Edo-style) sushi topping. However, there is a special sweetness that oozes from the gaps in the fibrous body. As for Kani (crab) served in the form of Nigiri sushi, there are Zuwai gani, Taraba gani, Ke gani, etc. 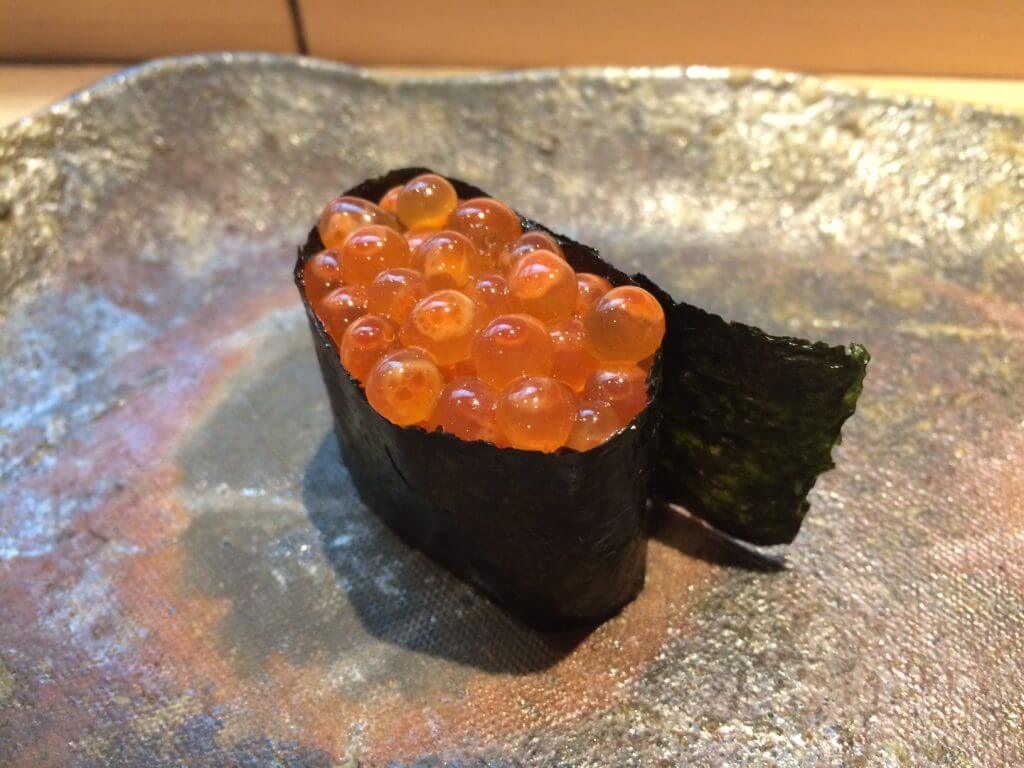 The robust sea urchin, salmon roe and herring-roe are all expensive toppings. They have a unique texture and taste that you won’t find in other toppings. As for Gyoran (fish roe) served in the form of Nigiri sushi, there are Ikura, Ezobafun uni, Kitamurasaki uni, Aka uni, Komochi konbu, Kazunoko, etc.