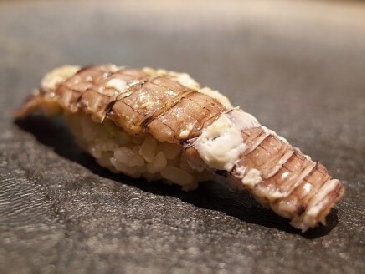 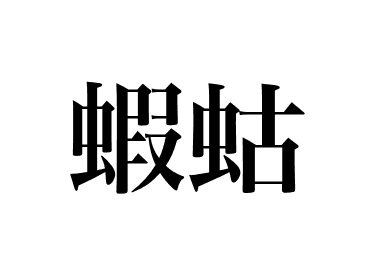 【Nigiri: Nimono】
What is shako?
When is the Shako (Squilla) is alive, it has a gray or light brown color. It transforms when it’s boiled. It changes to a reddish-purple color like the flowers of a rhododendron (shakunage). For this reason it was known as “shakunage,” which for some reason lead to the mispronounced version of the word, “shako.”The texture of the meat after being boiled with salt is different than that of shrimp, and you can also enjoy its rich fragrance. It comes into season in late fall before molting, but shako carrying eggs, which appear from early spring to early summer, are considered the best. The roe, called Katsubushi, is a top-grade delicacy.

Shako (Squilla) has a self-digestion enzyme that is activated when it dies, melting the body leaving only a shell, so there is nothing left to prepare for eating. So after being caught, it is boiled straight out of the net while still alive and packaged for distribution immediately.

Squilla is not valued as highly as shrimp or crab at the market, but it has a very high nutritional value. It contains minerals such as copper and manganese. It has higher vitamin A, B1, B2, B12, etc. content than shrimp and crab and also contains potassium, which prevents high blood pressure, and taurine, which controls cholesterol. It is especially rich in vitamin B12, which helps anemia, so you can expect this fish to keep your blood healthy.