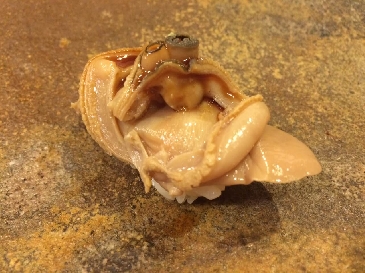 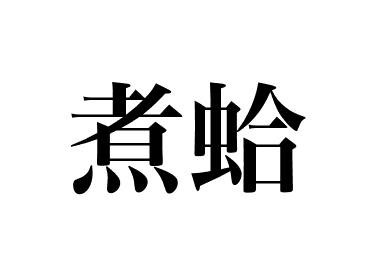 【Nigiri: Nimono】
What is Hamaguri?
Hamaguri prefers depths of about 10 meters in the sandy and muddy areas of inner bays where freshwater flows into the saltwater. Until the 1960s, Tokyo Bay was famous for digging for hamaguri at low tides. This has been destroyed due to land reclamation, etc. Furthermore, nearly all hamaguri that can be harvested in Japan are open-sea ‘chosen hamaguri’ (common shield-clam), and Japan’s original hamaguri has become somewhat of a fairy tale.

The majority of hamaguri sold on the market nowadays are chosen hamaguri (common shield-clam) imported from South Korea, or shina hamaguri (hard clam) imported from China. Once imported to Japan, they are released to inshore waters and kept as livestock. It is a well-known fact that when clams from Korea are heated, they shrink to pitiful sizes. When Japanese hamaguri are grilled, they swell in size so much it seems like they will jump out of the shells.

What does Nihamaguri nigiri taste like?
Common orient clam (Hamaguri) was once harvested in abundance from Tokyo Bay, even today is a fundamental ingredient in Edomae sushi. After boiled or steamed with sake, clams are dipped in a special sauce of soy sauce, sake and sugar. Clams become tender, take on a fluffy texture and rich ocean flavor. With each bite, you can enjoy the tastiness of the clam.