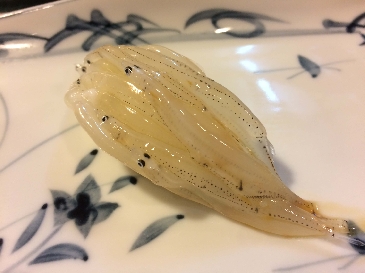 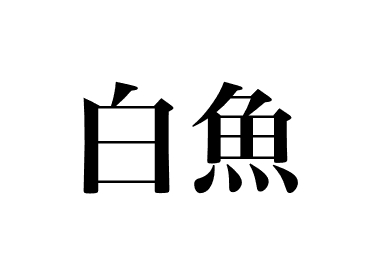 【Nigiri: Nimono】
What is Shirauo?
Shirauo (Japanese icefish) is found in various places throughout Japan as well as in Sakhalin and on the Eastern coast of the Korean Peninsula. They live in estuary areas and brackish waters of rivers. The spawning season runs from February to May and the shirauo grow to be from 5 cm to just under 10 cm.

Due to the fact that its head resembles the “triple hollyhock” crest of the Tokugawa clan, it is said to have been protected by Ieyasu Tokugawa as a fish that symbolized the clan. This fish is an example of neoteny, meaning that retains its juvenile form throughout adulthood. The body is transparent, but when it dies, it turns a whitish color as its freshness diminishes. This is where it gets the name Shirauo (which means “white fish” in Japanese).

What does Shirauo nigiri taste like?
This transparent beautiful fish has sweetness and slight bitterness. The raw fish sticks to hand and can be difficult to handle, yet the boiled ones crumble. Not easy to roll into sushi even for sushi chef. During the Edo period, it was caught at the mouth of Sumida river and was highly valued as a premium ingredient in Edo.