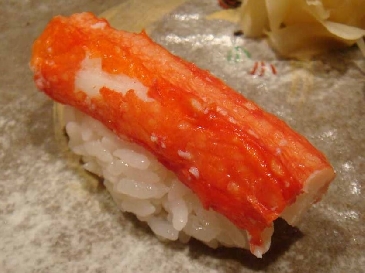 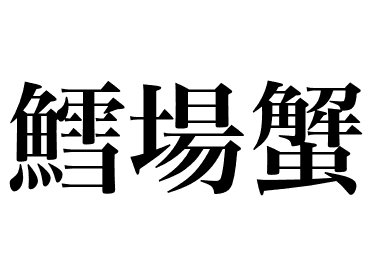 【Nigiri: Ebi/Kani】Tarabagani is found in places such as the Arctic Ocean along the coast of Alaska, in the Bering Sea and Sea of Okhotsk, at depths of 30 to 360 m. In the seas around Japan, it is found around Hokkaido. The shell has a width of 25 cm, and the largest reach over 1 meter with legs outstretched. Currently the catch volume is decreasing in the seas around Japan, so most of the Tarabagani available in the markets are from Russia. Taking advantage of the proximity, live Tarabagani imported from Russia to Hokkaido boasts high quality.

Known as the “King of Crabs”, Tarabagani is often used as a winter sushi topping, but it is not technically a crab. It is a relative of the hermit crab. While crabs have ten legs arranged in five pairs, Tarabagani, like hermit crabs, have eight legs arranged in four pairs. Also, while normal crabs move sideways, Tarabagani is also capable of moving forward and backward. Incidentally, the “Taraba” of Tarabagani comes from the Japanese words Tara (cod) and ba (place), meaning “a place where cod can be caught”.

While it doesn’t have much flavor, it does have plenty of sweetness. A generous amount of meat can be taken from the legs and the meat it has a surprisingly firm texture. The sweetness and umami are stronger when boiled than raw, but it is popular to consume it raw. This is how you can enjoy the sense of it melting on your tongue. As a sushi topping generally steamed or boiled Tarabagani is used. It goes excellently with shari (vinegared rice) and it is filling topping with a high satisfaction level.