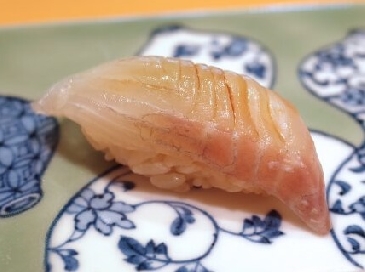 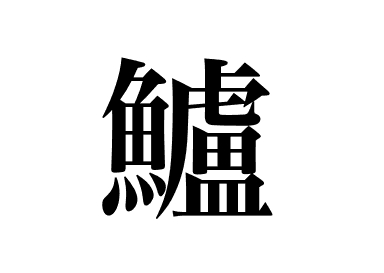 【Nigiri: Shiromi】
What is Suzuki?
Suzuki (Japanese sea bass) is found southward of southern Hokkaido along the coasts of Japan and the southern Korean Peninsula. The adult fish lives from rocky shores to inner bays and the young fish lives from brackish waters to freshwater areas. It grows to about 20 cm in the first year and about 40 cm by the third birthday, eventually reaching about 1 m. The body is a dark, silvery white color and has a shine like silver. The spawning season differs by region and is from October to February in Tokyo Bay, October to January in the Seto Inland Sea, December to January in Wakasa Bay and November to March in Kyushu.

The Japanese sea bass name changes as it grows, as if it is being promoted, starting with ‘seigo’, then ‘fukko’ and finally ‘suzuki’. The Suzuki comes into season in summer and has a delicious flavor that rivals the spring Madai, and winter Hirame. With every bite, you can enjoy the soft, chewy, sweetness of the white fish. Both the scent and taste are strong compared to other white fish such as sea bream and flounder.

The umami flavor is also concentrated in the skin fat where the skin meets the meat of the fish, so even when made into nigirisushi, it’s served with the skin still attached after being softened with hot water.

Related contents :
What is Shusseuo?