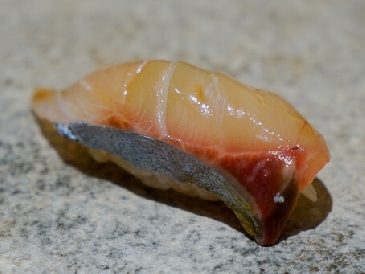 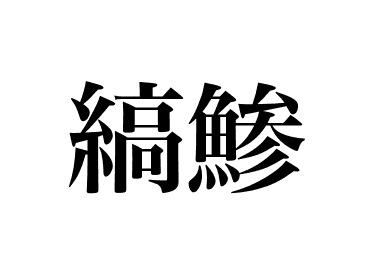 【Nigiri: Shiromi】
What is Shimaaji?
Shimaaji can be found from Japan’s Kanto region southward to the Indian ocean. There are many living around islands such as the Izu islands, which is how it got the name “shimaaji”, because ‘島 (shima)’ means ‘island’ in Japanese. Its young also have a vertical, yellow strip down the center of its body, so the “shima” may also be written as 縞, which means ‘stripe’. Shimaaji is an open sea fish and when they are young, dwell in the seaweed that floats on the surface, later moving to depths of 100 meters deep as adults. They move North between Spring and Summer, then from Autumn to Winter, they move South for a North to South migration. They swim in schools, eating small fish, squid and shrimp, among other things. It is the most delicious of the Carangidae (aji) family. It is a high-quality fish, indispensable as a summer sushi topping or sashimi dish.

What does Shimaaji nigiri taste like?
Wild ones that are caught during summer are wonderfully fine-textured with high-quality fat. The meat quality is more resembles the slightly sweet and mellow umami of buri (yellowtail) than its light and mild-tasting horse mackerel cousin. A fish that weigh about 1-2 kg is considered best. One single fish may sell for 10,000 to 20,000 yen (US$190). Unfortunately, natural ones are no longer available, 99% of them are farmed ones. Therefore, while most of the sushi presented as Striped jack at conveyor belt sushi restaurants is naturally caught fish from New Zealand, it is actually a subspecies of Striped jack. It doesn’t have fat and lacks flavor.

There is a lot of farmed fish at the market, but of course, they don't taste as good as the natural ones. However, there is only a small amount of natural striped jack and they cost five more times than the farmed ones.

Trivia: For hikarimono nigiri (silver-skinned fish), a bit of the silver skin is left on the back of the Striped jack, and when the skin is completely removed, it becomes a shiromi (white meat) sushi topping.