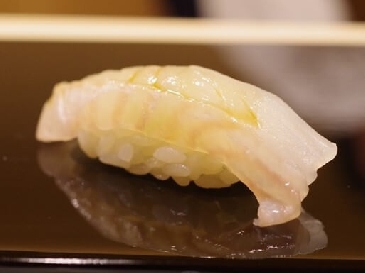 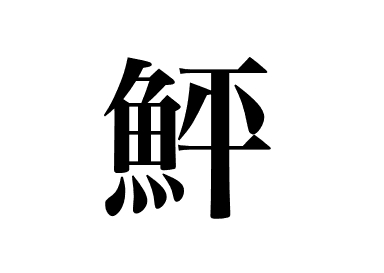 【Nigiri: Shiromi】
What is Hirame and What does Hirame nigiri taste like?
Hirame is a high-quality fish that, along with Tai, represents the white meat of sushi toppings. It boasts high popularity because of the softly lingering, polished sweetness, and the firm, chewy texture. Of the various types of hirame, the “kanbirame” has the highest fat content during the harsh winter months and sells for high prices. Despite its solid fat content, the meat is firm, and when fileted for preparation, the meat inside is a translucent white with the best flavor.

Hirame is a member of the Pleuronectiformes (flatfish) order and Paralichthyidae family (large-tooth flounders), making it a cousin of the “karei” flounder. As the saying goes, “left-eye hirame, right-eye karei”, the hirame’s eyes look to be on the left side when the black skin of the fish is facing up and the stomach is facing forward. As a gourmet ingredient, hirame is a high-quality fish while karei is considered to be a cheap fish for the masses. If you actually try them, the difference in umami between the two is blatantly obvious. However recently, karei hauls have decreased in volume and hoshi-garei has been selling as an ultra-luxury item.

The season for hirame is said to be from late autumn to early spring, especially mid-winter, when you can enjoy the kanbirame with its peak fat content. In general, hirame are found from south of the Chishima Islands to the shores of Kyushu, but lately live fish are being imported from South Korea. A high amount is also farmed, which means that you can taste delicious hirame throughout the year, regardless of the season. Incidentally, you can tell the difference between wild and farmed hirame by looking at its backside. It’s simple because the backside of wild hirame is pure white, but the farmed version has black specks on it.

The biggest reason kanbirame is the most delicious is that it is the most fatty just before spawning. The specific spawning timing differs depending on the temperature of the sea, so a sushi chef with good judgment will look for fish from a production area that boasts the highest fat content, depending on the time period. Size also matters with hirame. Hirame can grow to be up to 1 m long, but the best tasting hirame are 40 to 50 cm long and weigh around 2 kg. The best have especially thick bodies, are firm and have a beautiful shine. Meanwhile, the young hirame (weighing 1 kg or less) called “soge” that can be caught at the beginning of Autumn has a fresh taste that some sushi restaurants appreciate and use as toppings.

When preparing hirame, it is important to have a certain level of knife skills in order to avoid damaging the body. This is true for other fish as well, but hirame especially has extremely fine scales, so instead of the normal scale removal method, they must be removed with the sashimi knife. In some cases, a more inexperienced sushi chef may damage the body during these preparations. It would be such a waste to ruin the body unnecessarily, especially when the fish is so expensive.

Besides being used as a raw sushi topping or sashimi, hirame is also often used in kobujime, which brings out natural umami flavors. To enjoy the umami of the raw topping? Or to taste the Edo-style sushi skills of the chef with a faintly caramel-brown kobujime? Hemming and hawing over decisions like these are part of the fun of sitting at the sushi counter. Also, never hesitate to order this in nigiri form if you happen upon a coveted Engawa (the sinew along the fin). Only 4 can be made from one fish. Enjoy the heavenly sweetness of the fat and umami as they fill your mouth.

Hirame Nutrition and Effects
This fish is known for being a white fish with high protein and low-fat content. The calorie content is also relatively low for a fish. It has high mineral content such as potassium, zinc and selenium, as well as a good balance of vitamins D and E. It is also digested and absorbed quickly so it is ideal for the elderly and infirmed, but hirame is not used for hospital meals because of the high price. Generally, fish with lower fat content have less umami. However, they have a good balance of amino acids including Inosinic acid, glycine, alanine, taurine, lysine, etc. Particularly, the high content of Inosinic acid, which is responsible for umami, gives it a rich taste, while remaining light.

Related contents :
What is engawa?