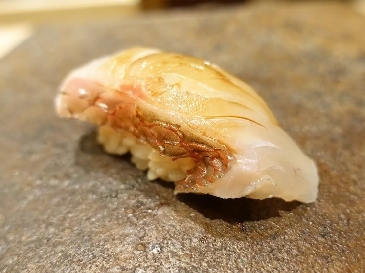 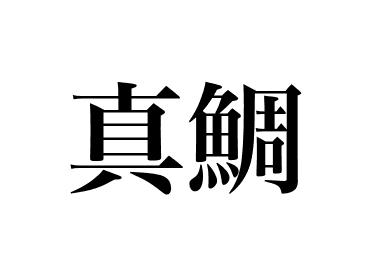 【Nigiri: Shiromi】
What is Tai?
There are about 3,900 known fish species in Japan, and of those 360 have a Japanese name ending in “-tai/dai”. However, only 13 of those belong to the most major “tai” family. Some of those are madai, chidai, kidai, and kurodai. The most familiar fish named like this, such as ishidai, kinmedai and ebodai, actually has nothing to do with the tai family.

What does Tai nigiri taste like?
Thanks to its refined appearance, Red seabream (Madai) has been considered an auspicious fish in Japan from olden times. It is known for its savory flavor, firm texture and very tasty flesh and considered to be the king of white fish. There are two ways to enjoy Madai, either served skinless to enjoy the concentrated sweet flavor of the white flesh, or as Matsukawa-zukuri, parboiled with the skin. The customer has an opportunity to savor the flavor of the entire fish, the skin, the fat under the skin, and the white flesh. Sea bream is served between winter and spring, the spawning period. There is one red seabream that recurrently migrates on the coast of the Seto Inland Sea for spawning, called Sakuradai (cherry blossom sea bream), which is especially delicious and highly valued. Meanwhile, once the spawning is complete and the fish loses its flavor, it’s called Mugiwaradai (barley straw seabream).

The madai with the most umami has been caught using the Ikejime process, then stored in icing storage for a day where it is gradually cooled and matures evenly, bringing out a high amount of umami. For farmed tai, using ikezukuri once it’s caught allows it to be eaten without the peculiar aquaculture flavor. In other words, farmed tai is not suitable as a sushi topping that requires aging.

In general, many sushi restaurants in Kanto prepare tai as their white fish topping. It’s safe to assume that if you request sushi with a white fish topping, you will get either tai, hirame or karei. However, in Tokyo it’s hard to get ahold of tai that is as delicious as the tai caught in the Seto Inland Sea of Japan, so some sushi restaurants opt to not make tai sushi. The famous Sukiyabashi Jiro is one such restaurant.

The sweetness of red sea bream comes from the high content of glycine, which is an amino acid. The glycine content in sea bream meat is approximately 140 to 180 mg per 100 g, much higher than the 50 mg per 100 g in tuna meat. It also only contains 350 mg per 100 g of inosinic acid, the umami component of fish meat, which is low compared to the 420 mg per 100 g found in bonito. This ratio means that the sweet flavor is emphasized more than the richness.

Tai (Red seabream) is often said that they are tastier when they weigh around 2kg and their length is about 40 to 50cm.

Related contents :
What is Red Snapper the same as “Tai” (Sea Bream)?