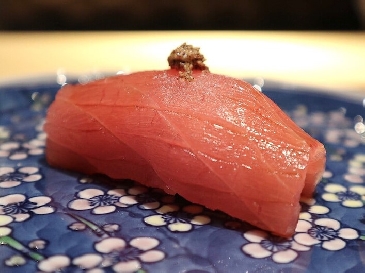 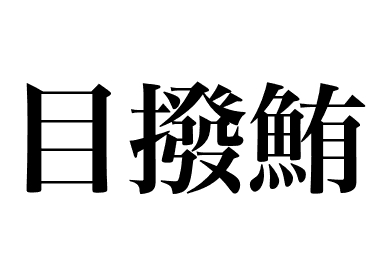 【Nigiri sushi: Akami】
What is Mebachi maguro?
Mebachi maguro (Bigeye tuna) are found over a wide area in the Pacific, Indian and Atlantic Oceans at ideal temperatures of 11 to 29℃, but they don’t live in the Mediterranean Sea. The red meat of Mebachi is a dark crimson. The taste is even comparable to Kuromaguro. To be picky, it isn’t quite as rich. Also, the Otoro, the belly part, has tough white lines, which detract from the texture. Since they are caught in high volume, it’s not priced as highly as Kuromaguro. Also, Mebachi is both produced domestically in Japan and imported both frozen and refrigerated from overseas. The color of this fish also doesn’t change quickly, so it is considered ideal for takeout sushi. Incidentally, at the Toyosu market Mebachi is abbreviated to “Bachi”.

What does Mebachi maguro nigiri taste like?
If Bigeye tuna is made to “Zuke”, it becomes a captivating beauty and produces a texture that is like sticking to a tongue. Edomaeshigoto is all about bringing out the best part of each sushi ingredient. Plus, very few know that the natural ones caught inshore around May and October could be as delicious as Pacific bluefin tuna.