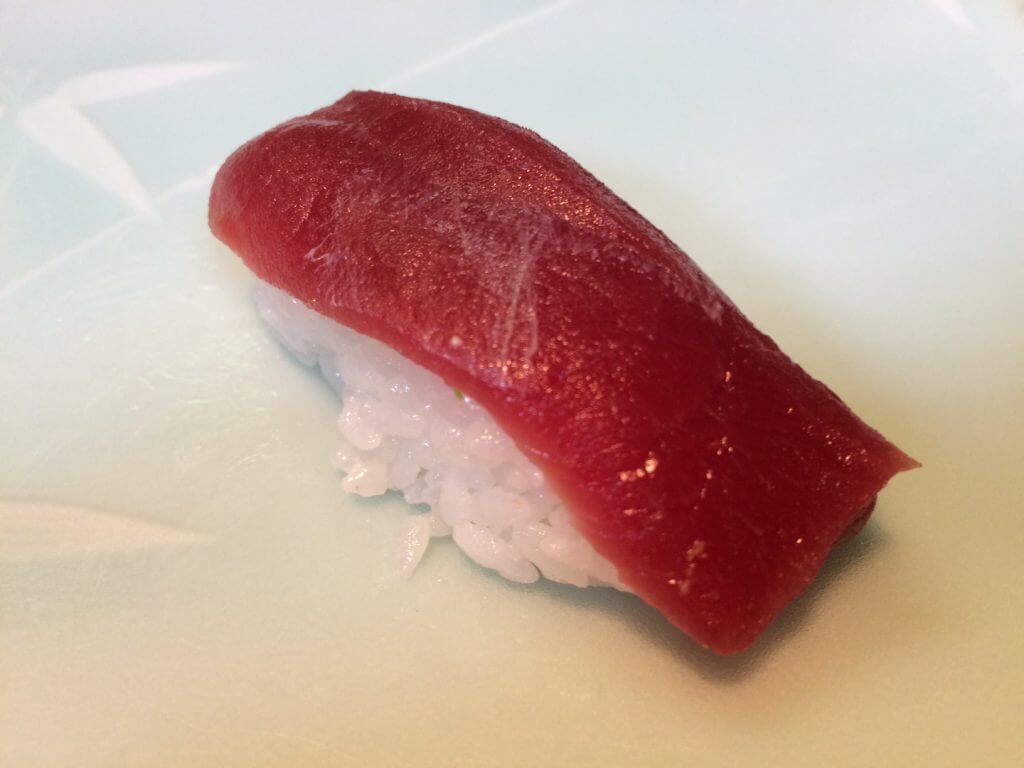 Japanese: 黒鮪 (kuro-maguro). This is the king of tuna, and is also known a shibi or honmaguro. At its largest, it is 3m long and weighs up to 400kg. It represents 1% of all natural tuna resources. It is really the jewel of the ocean. The Atlantic kuro-maguro caught in the Atlantic ocean (the Atlantic kuro-maguro is a different species or sub-species from the Pacific type) is called kuro-maguro in sushi restaurants. Inshore raw tuna is fresh and tastes amazing. They used to say that there was no substitute for it, but now that it is possible to quick freeze to 60°C below zero, it can be brought to Japan from all over the world. 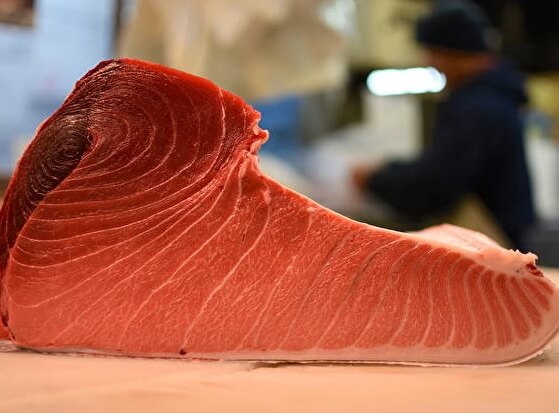 Tuna caught in Japan’s seas change locale depending on the season, and it is brought to the market raw. The main locations are Uchiura Bay (also Funkawan), Toi, Oma, Matsumae, Shiogama, Sado Island, Iki, Kii-Katsuura, Aburatsu, Okinawa and more. The quality of Pacific bluefin tuna caught in the Tsugaru Strait from Fall to Winter is very good quality and trades at high prices. Further, the Pacific bluefin tuna which is caught in the Atlantic ocean is transported packed in ice and raw is known as “Jumbo tuna.” It is considered to be the next best Tuna after the inshore variety. Jumbo doesn’t mean it’s big. Instead it means that it is imported on a jumbo jet. The price of pacific bluefin tuna can be between USD $150-600/kg depending on the part. 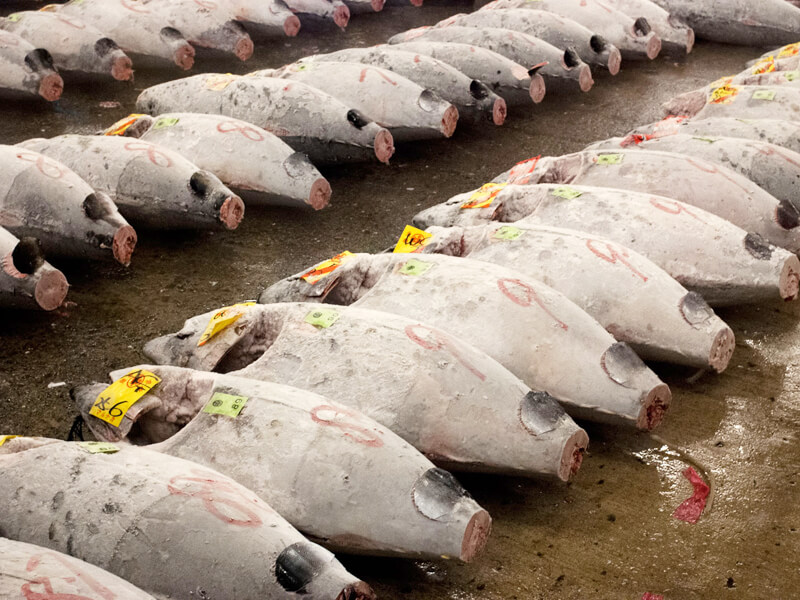 Pacific bluefin tuna from the Atlantic (US and Canada’s east coast) and the Mediterranean (Spain, Morocco, Italy, etc.) are for the most part frozen. This is not well known, but due to the progress of refrigeration technology, the frozen tuna may be rated higher for taste than raw tuna which is more difficult to manage from a transport logistics perspective.

Most tuna in distribution are fattened

Of course, if it doesn’t get to travel the wide ocean, it doesn’t get as much exercise and the taste degrades. Pacific bluefin tuna you can get at supermarkets and conveyer belt sushi is almost all fattened*.

*Fish fattening is to catch tuna by fixed net fishing method when they are skinny after egg-laying, and to fatten by feeding wild fish such as sardine and mackerel for three months. 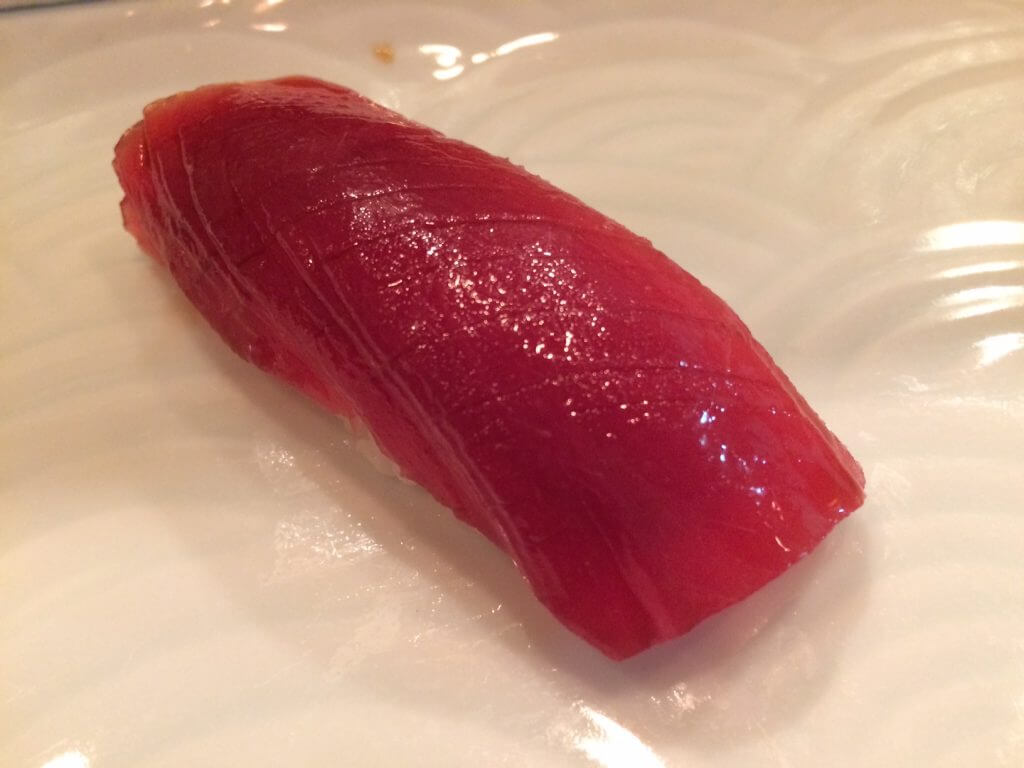 In summer the taste of pacific bluefin tuna worsens in Japan, so the southern bluefin tuna, which has opposite seasons of the Pacific Bluefin, becomes the choice tuna. The top quality tuna are those caught in low temperature waters with fast currents such as the coast of Cape Town, South Africa, the coast of New Zealand, and Tasmania, Australia. They are normally imported frozen. The fattened southern bluefin tuna of Port Lincoln, Australia is almost entirely exported to Japan. 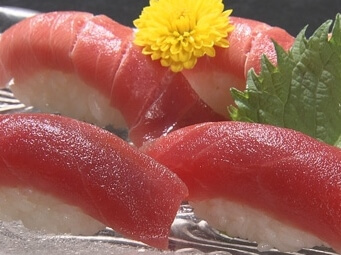 Japanese: 目撥鮪 (mebachi-maguro). The Japanese name means big eyes and stocky head and it looks just like that. It is discernable by its thin white stripes that run through its contrasting bright red body. It is widely fished in the tropical and warm waters of the Pacific, Indian, and Atlantic oceans and can reach a total length of 2m. They swim deeper than any other tuna, (100m-150m below the surface) just off the coast. Ships use long fishing lines** to catch them. Once caught, they are processed on the boat and flash frozen. These are mainly used for the sashimi in supermarkets, izakaya-style restaurants and conveyer belt sushi restaurants. Compared with the pacific bluefin tuna, it has the advantage that its color does not generally change and it is often used in deliveries.

To hang a long line (Mikinawa) in the sea, covered with about 3000 fishhooks attached to branch lines (Edanawa), aiming at a path of schooling tuna.

When fishing inshore between April and May, Bigeye tuna gets caught in fixed nets*** of Kyushu and Shikoku, and it is prized as a replacement for Pacific bluefin tuna during seasons where its taste is not its best. Further, those caught from Autumn are higher in fat content and traded at high prices comparable to Pacific bluefin tuna. It has more akami (red meat) compared with Pacific bluefin tuna, but it is sweet as you’d expect from tuna with good balance. It is not widely distributed and it is often consumed locally.

Tuna have a habit of migrating to the same ocean area at the same time each year. A coastal fishing method called Fixed net fishing consists of placing a net in the sea and wait for a school of tuna. The advantage of this method is to be able to capture the fish alive without causing any injury or damage. 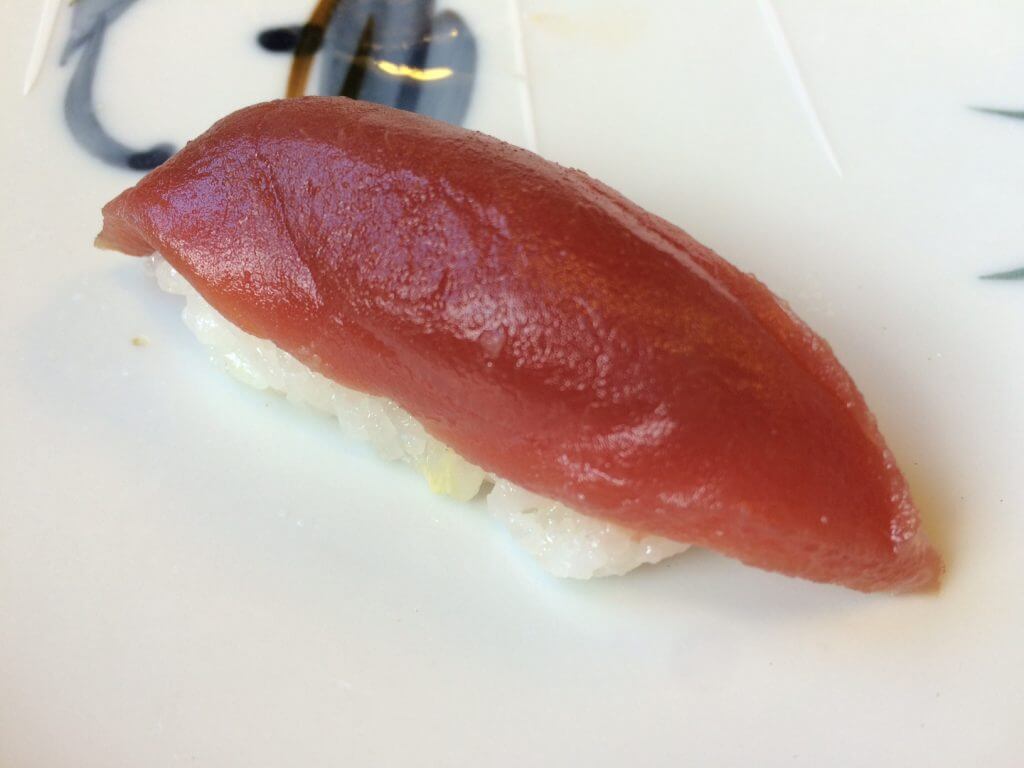 Japanese: 黄肌鮪 (Kihada). It is named for its yellow skin. It is approximately 1.5 m in length. It weighs approximately 50-100 kg. Those caught inshore in Japan are cooled on ice and brought to the fishing port raw. Those caught farther away are frozen before being brought ashore. This is the most common tuna catch and it is essential for ingredients such as canned tuna. It does not have any part that could be considered fatty tuna, and it is low on fat in general. Because of its fresh and high-quality taste, you can never get tired of eating it. In Hawaii it is also a popular topping called Ahi. Further, its light and refreshing taste is preferred in Osaka where, if you ask for tuna, you’ll get yellowfin.

Japanese: 鬢長鮪. Also called “binnaga-maguro,” or “bincho-maguro.” This is the smallest of the tuna with a length of about 1.2m and a weight of 40kg. It is often consumed after being processed, or used for canned tuna. 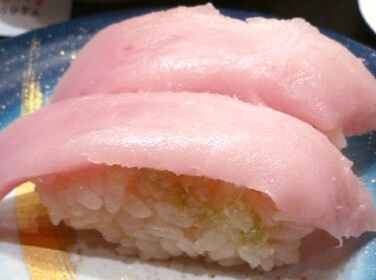 What is the “bintoro” you see at conveyor belt sushi?

Albacore tuna swims close to Japan’s shores from Spring to Summer and because of what it eats (mainly sardines), it has lots of fat and its body turns from pink to white. This is called “bintoro.” It’s a popular item at conveyor belt sushi.

So what did you think? To put it simply, these are the only types of tuna used for sushi. Pacific bluefin tuna is certainly delicious and it’s the front-runner at the markets. However, the Pacific bluefin tuna is not always the most popular depending on the location, the season, and culture of the area.
However, it makes sense commercially that the processing to preserve the freshness of the high-priced Pacific bluefin tuna and southern bluefin tuna on the ship after being caught is superb and the quality management cannot even be compared with other tuna.

If you want to eat tuna in Japan, you should eat natural Pacific bluefin tuna or southern bluefin tuna. I think once you try it you’ll wonder what you were doing eating the subpar tuna of the past when you experience its deep flavor and the umami of the fat. Just for your reference.

The migrating route of Inshore bluefin tuna and fishing place.

Tuna is allowed to rest before it is used.

What are Meji , Chubou and Maguro?

What is the difference between the taste of marbled and lined fatty tuna?

Why is sushi with tuna topping so expensive?

Tuna was not a premium fish during the Edo period.

Have you heard of the more rare parts of the tuna?

We will explain fishing methods which could affect the quality of caught tuna.