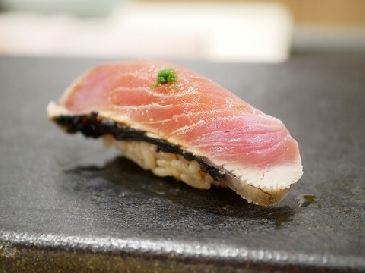 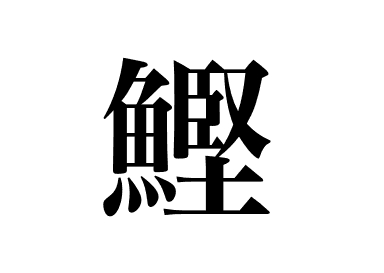 【Nigiri sushi: Akami】
What is Katsuo?
Bonito that are heading up north along the Japanese islands called noborigatsuo (初鰹 or 上り鰹), which has a moderate amount of fat and light taste. Bonito that are going down south are modorigatsuo (戻り鰹 or 下り鰹), very fatty and best eaten with green long onions and ginger. It loses freshness easily, so it was not used for sushi until after the Showa Period began.

What is Mayoigatsuo (迷い鰹)?
Bonito (katsuo) really don’t like to be in seawater with low salinity. The salinity of inner bays fluctuates depending on the size and number of rivers that flow into them, and fish that dislike freshwater would never go near brackish water areas (inner bays and estuaries). It is said that it is hard for bonito to go into the Sea of Japan. This is probably because from May to August, the peak season for China’s Yellow River and Yangtze River flows, seawater mixed with freshwater spreads in the Sea of Japan. Naturally, the freshwater comes into the Sea of Japan via ocean currents, so the freshwater-hating bonito avoid entering the Sea of Japan. However, the bonito that strayed from their school, that were supposed to migrate north in the Pacific Ocean before May, head north in the Sea of Japan. These are called “Mayoigatsuo”. “Mayoi” means “lost” in Japanese and “gatsuo” comes from the Japanese word for bonito. They are caught in fixed shore nets aiming for buri from the second half of November. The meat is firm and it has ample fat for traveling in the cold Sea of Japan waters. It also has a rich flavor and strong sweetness. The number of Mayoigatsuo caught is small and the volume supplied to the Toyosu market is less than 10% of that of in-season bonito, so the price is incomparably more than that of the spring and autumn bonito.

Trivia: Along with disk abalone, bonito cannot be judged by its quality by appearances. Whether it is thin or fat, you won't know until you actually cut it open. Especially around April, its quality changes dramatically each day.

What is Toro Katsuo (Torogatsuo)?