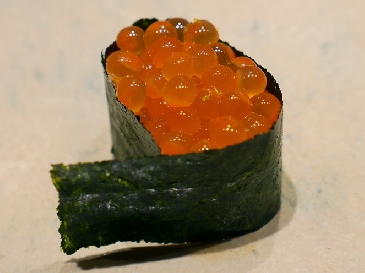 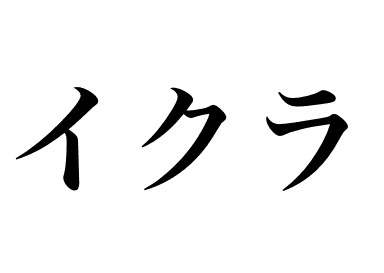 What is Ikura?
Ikura（Salmon roe） is a Russian word meaning fish roe. When a skin of sack that holds eggs becomes thinner, eggs are removed and dipped in sweet soy sauce. A fine flavor and umami extract spread and melt in the mouth. It is soaked in a marinade, so it is not necessary to dip it in soy sauce when eaten. Usually it is eaten as Gunkan maki.

The secret story of how salmon roe became a sushi topping
Between the time Edomae sushi was born (1810-1830) and around 1930, the toppings used in nigiri-sushi were strictly limited to slices of seafood. There were no so-called delicacy toppings (such as salmon roe and sea urchin, etc.).

However, in 1934, a restaurant in Ginza called Kyubey started a revolution. This restaurant is still synonymous with high-end sushi, but at that time many political and business people went there as well. Then, one night... Apparently one of the regular customers was tired of eating ordinary sushi and said to the chef, Hisaji Imada, “I want to eat some sushi that is more unusual. Salmon roe sounds like it would make good sushi,” as a joke. Imada, who took these words seriously, thought to himself, “But the roe would fall off if put directly on the shari (vinegar rice),” and racked his brain that night for a solution. Finally, he had an idea and said, "I know, I could just surround shari with seaweed and put salmon roe in it." This is how the salmon roe Gunkanmaki were born.

Next, when that customer came in again and Imada nervously served him his new salmon roe sushi concept, it was received much better than expected. Gaining confidence from this reaction, Chef Imada put it on his regular menu. The story goes that rumors of the delicious taste spread and other sushi restaurants started to copy it. Then, the term “ikura gunkan-maki”(salmon roe battleship roll) was coined.

Recipe : Preparing salmon roe is not that difficult. First, place raw row in brine water with about 3% salt at a temperature of approximately 50°C and the eggs will separate from the ovary membrane. Now take the end of the roe and shake it so that the little pieces of roe will fall out. The eggs turn a bit white at this point, but they will turn transparent later so don’t worry. The water will also be very cloudy. Rinse gently with water until all the excess membrane and strings fall away. Once the water runs clean, leave for around 30 minutes on a bamboo sieve, allowing it to dry naturally. The drying process is very important for the broth to permeate it properly. Next immerse it in equal parts sake and soy sauce, and leave it in the fridge overnight so that it is infused with flavor. That’s all!

Trivia : It is often thought that salmon eggs of salmon swimming upstream in the river where they are born are used, but in fact, eggs that are about to hatch have a hard skin and are not suitable for consumption. Salmon eggs used for the Ikura topping is from salmon caught in stationary costal nets.