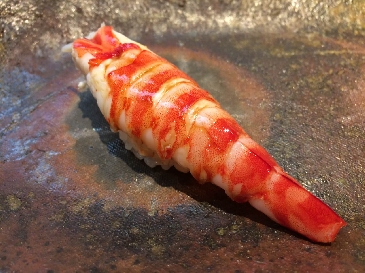 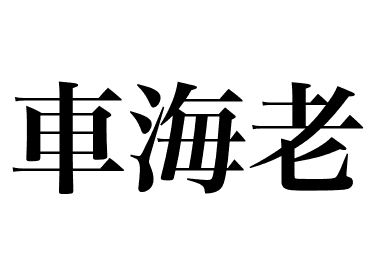 On the other hand, the sweetness of ama ebi (sweet shrimp), botan ebi (botan shrimp) and shima ebi (Morotoge shrimp) when eaten raw is appealing. However, kuruma ebi is a step above in terms of aroma and firm texture. Also, their sweetness and moisture are lost with heat and instead of a pleasant firm texture, it ends up with an unpleasant hard texture. For this reason, the only way to enjoy these three types of shrimp as sushi, is raw.

According to the history of customs during the Edo period, “The name kuruma ebi (Kuruma means ‘wheel’) was given because it turns a bright red and bends into the shape of a wheel when boiled.” The kuruma ebi--which has spent decades of being served as common Japanese cuisine--is native to the inner bays from southern Hokkaido southward, but finding wild kuruma ebi is rare. The season for the wild version is Summer. The main production areas are Oita, Ehime and Aichi. Most farmed kuruma ebi come from Kyushu. It is extremely expensive, selling for the US $40 to 130 per kg regardless of whether it is wild or farmed.

The Japanese name of the kuruma ebi changes depending on the size. When the body length is about 10 cm it is called ‘saimaki’, at 15 cm it’s called ‘maki’, ‘kuruma’ at 20 cm and ‘ooguruma’ for anything bigger. Saimaki is just the right size to eat in one bite, so this is generally what is used for nigiri sushi. However, at Sukiyabashi Jiro, the ooguruma size is used for its texture, so the size used depends on the preference of the sushi chef.

The amino acids that contribute to the sweetness and umami of kuruma ebi are taurine, proline, glycine, alanine and arginine, among others. There is an especially high glycine content, which makes the sweetness stronger. In addition, the chef may include oboro between the topping and shari (vinegared rice), or wrap in kimi-zu (vinegar mixed with yolk, dashi, mirin, etc) oboro for a richer taste. Oboro was originally used in the Edo period to mitigate the acidity of vinegar and supplement the umami of the fish.

The most important part of the preparations is how the heat is applied. First of all, the body is skewered to prevent it from rounding. The skewer is stuck into the first thin layer of skin on the belly side carefully, so as not to damage the meat. Next, the kuruma ebi is washed in cold water, then boiled in salted water, but it is the boiling here that determines whether the prawn will become delicious sushi or not. The general idea is to boil until the kuruma ebi at the bottom of the pot floats up to the surface and overboiling will turn the meat get hard. It will turn a bright red from boiling and immediately dunking in ice water makes the colors even brighter. Once the chef receives an order, he peels the shell, splits the body open from the center with a butcher knife, makes it into sushi and serves it to the customer. It is important to split open the meat directly before making the sushi, which saves the robust aroma the kuruma ebi is known for, so it fills the mouth of the customer. Cutting in advance diminishes this flavor before reaching the customer.

It is also becoming more popular to boil just before serving to the customer. In this case, it is served slightly warmed, which brings out the sweetness. The sweetness of the boiled kuruma ebi is stronger than when eaten raw. We know that when raw shrimp is heated, the adenylic acid level increases and this component increases the level of sweetness. Then when the leftover head is grilled with salt, it can be served as a tasty snack and special treat for the customer, especially paired with alcohol.

Trivia: Some people will experience an allergic reaction to shellfish due to tropomyosin, if they eat shrimp that is only boiled, causing the body to itch. Tropomyosin is vulnerable to vinegar so the boiled shrimp should be sliced open and then marinated in vinegar before using it as a sushi topping. This will suppress the allergic reaction to the shellfish to a certain extent.

Related contents :
What is Meki? Substitute for Kuruma ebi?

What is Black tiger shrimp?

Once you try Kuruma ebi sushi, you’ll never want any other shrimp.

What is the difference between denbu and oboro?