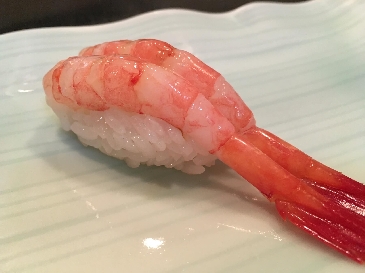 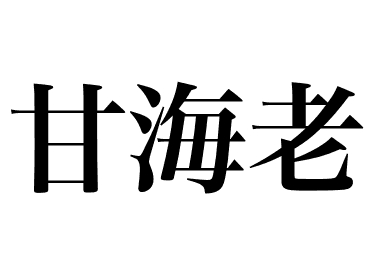 What is Amaebi?
Just as the name suggests, amaebi has an elegant sweetness (‘ama’ means sweet in Japanese). Amaebi is actually just an alias for this shrimp and the official name is “Hokkoku akaebi (Alaskan pink shrimp or northern pink shrimp)”. Amaebi is found along the Japan Sea coast from Toyama Bay northward, and on Hokkaido coasts. They are about 10 cm long and live up to 1000 meters deep in the sea and spawn once every two years. The umami increases from autumn to winter and the egg-retention period is from January to February. This is the time to try the blue-green eggs (which turn black as they lose freshness) with the shrimp.

These prawns transform themselves into females altogether when they reach the age of six years old. The ones in midst of the transformation period are very expensive. The ones left aside the whole day after caught are considered tastier than fresh alive ones.

What does Amaebi sushi taste like?
The sweet component mainly consists of glycine, a type of amino acid. The stickiness comes from the high glycoprotein content. There is also a high moisture content so when the shrimp is boiled, the body shrinks and the texture isn’t very pleasant. Therefore, it should be eaten raw with wasabi-soy sauce or prepared as a raw sushi topping.

There is a lot of cheap, frozen, imported amaebi on the market, mostly from Russia, Canada and Greenland. These frozen goods are what you’ll find at conveyor belt sushi restaurants and the flavor is considerably inferior to those that are caught in Japan and served raw.