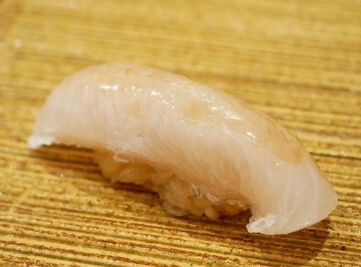 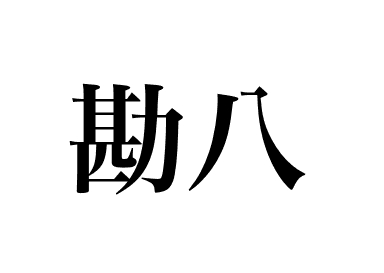 【Nigiri: Shiromi or Iromono】
What is Kanpachi?
When kanpachi is young, the markings on the head look like the Japanese character “八” (which is pronounced ‘hachi’) and led to the fish being named “kanpachi”. This design disappears when the fish matures to an adult. Kanpachi can grow up to 2 meters (and approximately 70 kg) in length, but fish around 3 to 5 kg are thought to be the tastiest. The shape of the body is similar to buri and it has a pale, yellow stripe on the side of its body in the center. It migrates from Aomori to Kyushu on the Japan Sea side, or from Kinkasan in the Tohoku region of Japan to Southern waters on the Pacific Oceanside.

What does kanpachi nigiri taste like?
Pale pink flesh with fine texture. Slight refreshing sweetness in tasty oozing fat. After it is kept and aged for several days, it becomes even tastier than the ocean-fresh one. Although the same kind as yellowtail fish, kanpachi is the most valued one. Greater Amberjack (Kanpachi) is often raised on fish farms, so if you happen upon a natural kanpachi when it is in season, do not hesitate to order it.

Related contents :
Are Hamachi and Buri the same thing?