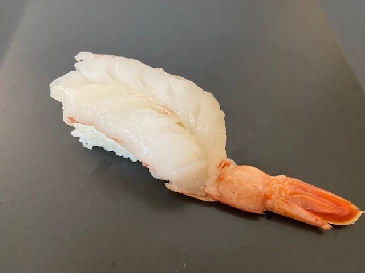 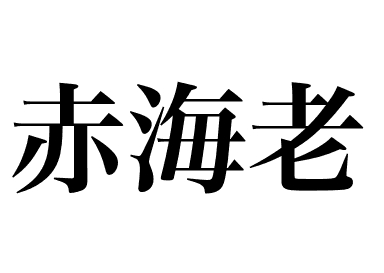 【Nigiri: Ebi/Kani】There are many shrimp that are called Akaebi. The common name for this shrimp is Argentine red shrimp. This shrimp mainly lives in the shallow waters of the Atlantic Ocean off the southern coast of Argentina, and sometimes make myriads of colonies. Therefore, it can be caught in large groups using nets so the cost is relatively low. This type grows relatively quickly compared to other shrimp but the price has jumped up in recent years due to a drain on resources.

Well-known, imported, frozen shrimp includes Black tiger prawn, Whiteleg shrimp, etc., but these are farmed in Southeast Asia, while the Akaebi is caught in the wild. Then, in order to preserve freshness, shrimp to be used for sashimi and sushi is selected on the ship and rapidly frozen. This shrimp is also known for its boiled-like red color, despite not being boiled. The coloring comes from red pigmented carotenoid and the Argentine red shrimp contains about double that of the Black tiger prawn.

Until not too long ago, it was sold at conveyor belt sushi restaurants under the name Botanebi. To put it nicely, it was a substitute. To put it frankly, it’s mislabeling and even fraud. Consumers tend to believe that Botanebi is more luxurious. You would think that changing the name to Akaebi would make it less appealing, but it tastes so good that sales have grown instead. About 200,000 tons are caught in Argentina annually, of which about 20,000 tons are exported to Japan.

The meat substance is similar to Amaebi and Botanebi of the Pandalidae family, and it is soft with a sweet flavor. The bright red color is also appetizing. To be honest, you probably wouldn’t know the difference if you were told it was Botanebi. When making Nigiri sushi, it is fine to eat raw like Botanebi, but the texture that comes from light grilling brings the taste to the next level.

Related contents:
What is Spot prawn?

There are strangely two types of Ama ebi