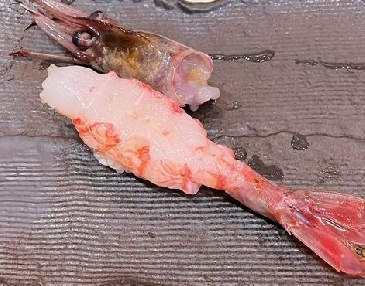 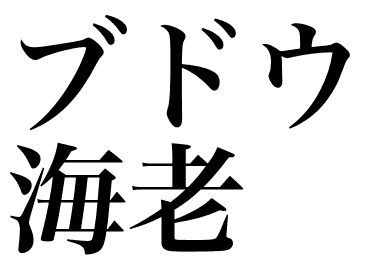 【Nigiri: Ebi/Kani】Budou ebi is a nickname for the color of its body and the official Japanese name is Higoromo ebi. Budou ebi is a deep-sea shrimp found at depths of 200 to 300 meters and its length is about 20 centimeters. While it can be caught year-round, it is considered to be in season between July and September.

It is caught on the Pacific side of Japan from Choshi to Hokkaido, but it is most highly valued in Sendai. In the past, large volumes were caught through trawl net fishing, but now it is scarce and considered to be a premium shrimp. Lately those produced in Rausu, Hokkaido and caught live are highly valued. There is also a shrimp called Budou ebi in Suruga Bay, but these are both different species. However, sushi restaurants treat them as the same shrimp.

It has a pleasant sweetness. If the sweetness of this shrimp was to be described in terms of sugar, it would be granulated sugar. The color also changes slightly depending on where it is caught. When caught in Kamaishi it is a red wine color, but when caught in Yuriage the purple hue is stronger. It is an extremely rare topping that you can only try at certain sushi restaurants in Sendai and Tokyo. The texture is also nice and it conforms to sushi rice nicely with a pleasant aftertaste. It’s a rare and expensive shrimp for which the market price is often nearly US $20 per shrimp. If you do happen upon it at a sushi restaurant, you’ll definitely want to give it a try, regardless of the price.