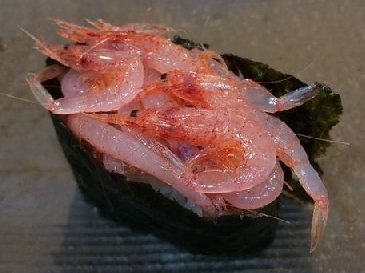 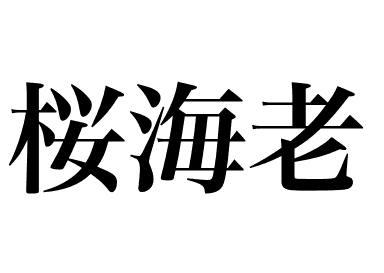 【Nigiri: Ebi/Kani】Sakura ebi is a small shrimp at only 4 to 5 centimeters in length. During the day it stays at sea depths of 200 to 300 meters, but at night it comes up to depths of only 20 to 50 meters from the surface, to feed on zooplankton. While it can be found in the Enshu Sea, Sagami Bay and Tokyo Bay, it is most dominant in Suruga Bay. They say this is because of the rich calcium and nutrients that come from the melted snow from Mt. Fuji, as well as the topography of Suruga Bay, which has a sudden drop in the sea floor. When sakura ebi is in the sea, it is colorless and practically transparent, but it is so sensitive to the light that as soon as it is caught, it turns a pink color like cherry blossoms (sakura), which is where it got its name.

Let’s look at the history of sakura ebi, going back to 1894. The story goes that it all started when the float of a fisherman out fishing for Aji got caught in the current and sunk down nearly to the ocean floor, where he accidentally caught a mass amount of sakura ebi. The three fishermen cooperatives that fish for sakura ebi nowadays include Yuicho, Kanbaracho and Oigawacho in Shizuoka prefecture. There are two fishing seasons: one in spring and one in autumn. The spawning season runs from June to September and it is illegal to fish for sakura ebi in this place during this time period in order to preserve resources.

The most important thing for sakura ebi is freshness. Sakura ebi caught at night is put up for auction in the morning and shipped out immediately. This is then spread out on a riverbed, seashore or a field to be sun dried. Sakura ebi dried naturally in the wind is famous nationwide but the local way to eat it is raw. Freezing technology has developed rapidly in recent years so it is more common to see raw sakura ebi in Tokyo restaurants nowadays, but this was originally how the local fishermen ate it.

The first raw sakura ebi gunkan-maki (battleship roll) debuted at a Tokyo sushi restaurant in the 1980s. When you put it in your mouth, the sweetness and shrimp flavor instantly flood your mouth. The shell is soft so it’s not bothersome, but this topping is intensely unique and the jury is still out on whether it pairs well with sushi rice. Most conveyor belt sushi restaurants serve boiled sakura ebi so it is offered at a relatively cheap price. The shrimp flavor is still potent in this case, however. Either way, it is a rare topping, so if you find it make sure to give it a try.