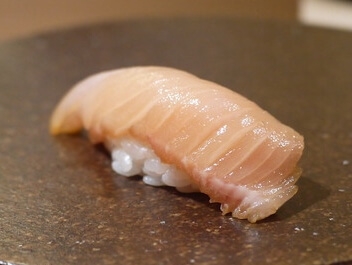 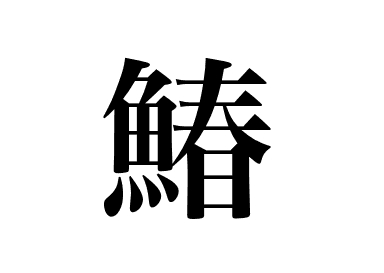 【Nigiri: Shiromi】
What is Sawara?
Found across the country's coasts from southern Hokkaido to Kyushu and Okinawa, sawara is often caught in the Seto Inland Sea. Sawara is called by different names as it grows. Young fish of 30-40 cm are called yanagi. 40-50 cm are called sagoshi. 50-60 cm are called nagi, and that 60 cm or over are called sawara. It can reach large sizes up to 1 m in length.

Sawara is often thought of as a spring fish but its season can vary depending on the region. In the Seto Inland Sea, sawara comes from open seas to spawn. The character for sawara, “鰆” incorporates the character for spring (春), apparently from the phrase “you know it’s spring by the sawara”. Kan-sawara is enjoyed in the Kanto region starting in autumn. Those caught after December are especially delicious. In Wakayama, Sawara caught during the cherry blossom (sakura) season is called Sakura Sawara.

Sawara is a type of mackerel and it has a beautiful white flesh but without the reddish parts like a typical mackerel. It has a texture that melts in the mouth and a unique flavor where the skin meets the flesh. This is the secret to sawara's popularity. It does not have a strong taste but it is rich which is believed to be because they feed on sardines and Pacific saury.

By feeding on sardines and pacific saury, we can surmise from the content of fatty acids that make up the fat of the sawara. The fat content of sawara can be as high as 14% in early February and it has a high amount of Eicosapentaenoic acid and Docosahexaenoic acid compared with other fatty acids. The Docosahexaenoic acid is higher than sardines and pacific saury. Therefore, in addition to being good for brain activity, it is also good at preventing arteriosclerosis.

The tastiness of sawara can be understood from an extract of its muscle. It has 450 mg of nitrogen in every 100 g of muscle. This is as much as sea bream and yellowtail, meaning it has plenty of umami. When it comes to amino acids, it has as much histidine as mackerel. It has more taurine than sea bream. It is also plentiful in substances that give a rich taste such as inosinic acid, carnosine, carnitine and others. These are the substances behind the rich flavor of sawara.

What does Sawara nigiri taste like?
Generally, it is baked and eaten but you can really taste the flavor of sawara when served as sashimi. Aging it or preserving as kobujime and then serving it as nigiri sushi optimizes the umami of sawara. The only sawara that came to the sushi chef in a very fresh state can be used as a sushi topping so if you see it in the chef’s refrigerated case, you definitely want to try it. Unlike bonito, sawara skin is better when seared. This is because when it is seared skillfully, its soft flesh will become even softer. Even if it feels a little bland when you first taste it, the more you chew, the more apparent the flavor. It will also leave a delicious lingering taste on the back of your tongue. It doesn’t have a peculiar flavor, which is one of the appeals that means you won’t get tired of this fish. Generally, it has a high fat content so the parts near the dorsal fin or tail are said to taste best, but there are some sushi restaurants that prefer the ventral side. Some like this as much as they like fatty tuna.