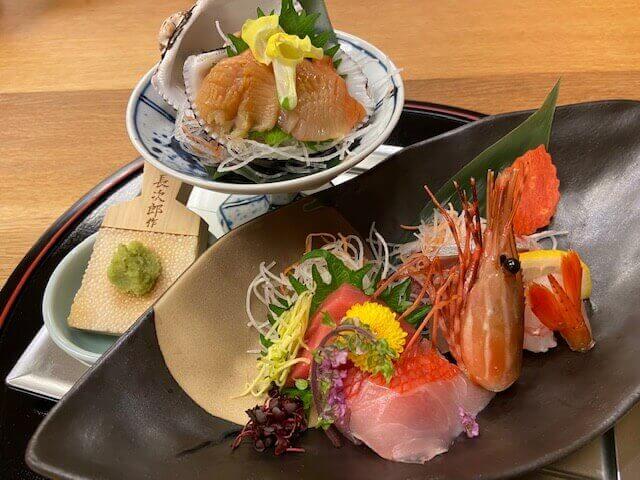 Both Sashimi and “Otsukuri” are filleted fish that has been deboned and skinned, then cut to the perfect size, served to be consumed raw. Both originated in the Kansai region but by the late Edo period, the term otsukuri was used in Kansai and sashimi was used in Kanto. The word “kappo” written as “割烹” in Japanese, is a combination of “割” which means splitting open with a knife, and “烹” which means boiling grains, and the “割” cutting open portion means otsukuri/sashimi.

The word “namasu” is used today basically as a synonym for vinegared foods, but the word originally came from the term “namashishi” which meant “raw meat”, and that is probably the basis for otsukuri/sashimi, which represent cuisine prepared by cutting/filleting. Dehydrated meat, dehydrated seafood, or naturally fermented seafood that has been sliced thinly is called “namasu” and at first, it was served just placed on a plate. During the late Muromachi period (in the 1500s), the presentation of namasu became more elaborate than simmered/boiled or grilled dishes, and it became common to season namasu with vinegar. This transition became the foundation for the creation of delicious sashimi.

It actually wasn’t only different dialect that led to Kansai using the word otsukuri and Kanto using the word sashimi. They are completely different from the method of cutting the fish, to food presentation to the type of dish used for serving. 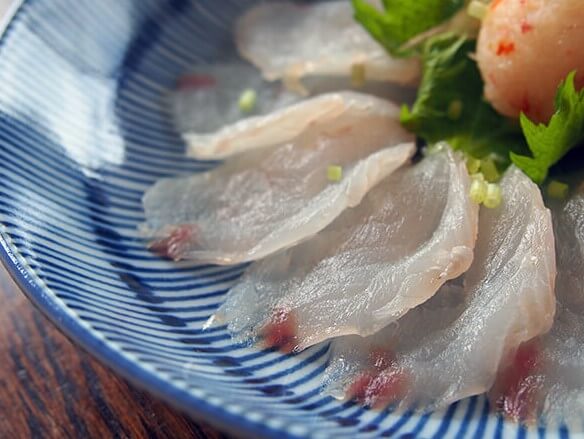 White fish is the top biller for Kansai’s otsukuri, and it is cut thin and diagonally, layered for presentation and generally served on a flat dish. Conversely, sashimi is cut thicker in rectangular shapes, leaning sterically, and lined up neatly in order for presentation, then served in a deep dish with plenty of “ken” (vegetables cut in shredded strips) and “tsuma” (seaweed placed before and beside the sashimi). While the volume and the size of the dishes used for serving have changed, this tendency of the method of preparation has endured from the Edo period to today.

Rather than white fish like sea bream and flounder (used in Kansai), tuna and bonito are more suited to this type of cut and presentation unique to Kanto sashimi and. The differences between sashimi in Kanto and otsukuri in Kansai grew proportionally with the increase of the popularity of tuna in Edo. In addition, due to geographical conditions and local disposition, Kanto residents had a diet composed mainly of seafood. They didn’t arrange meals by combining fish and vegetables, or in other words, combining yin and yang ingredients and dishes, the way the Kansai folk did.

Otsukuri/sashimi is also one of the side dishes (known as mukozuke) for Japanese “kaiseki” ceremonial meals. When sitting, facing the table at a tea ceremony meal, the rice bowl, soup bowl and “mukozuke” dish are placed to form an equilateral triangle with mukozuke forming the point of the triangle farthest from the recipient. “Muko” means “opposite” so this is where the term “mukozuke” comes from. White fish is mainly used for mukozuke. The fish is salted using the “kamijio” method, in which a piece of special Japanese paper that has been sprayed and wet with water is used to cover the fish, then salt is applied from above the paper. After that the fish is cut long and thin (but not shredded) or cut thin and diagonal, a mixture of vinegar and soy sauce is poured on it, and it is served alongside a small amount of “tsuma” such as rock tripe (iwatake). The term “mukozuke” is typically only used for the cha-kaiseki ceremonial meals, and so while it is essentially a mistake, these days otsukuri and sashimi are called “omuko” because it sounds good.

While a bit off-topic, kaiseki is written as “懐石” are dishes made for the enjoyment of matcha (green tea) while the banquet style kaiseki written as “会席” are made to enjoy sake. The core and star of that meal is the raw fish cut while still alive then arranged with head and tail to look lifelike, and called “otsukuri”. In contrast to the mukozuke in 懐石 (kaiseki), otsukuri must be extravagant and is an important element in the presentation.

The serving plates used for Kansai-based otsukuri draw from the mukozuke tradition and usually shallow dishes that don’t form a distinct shape are used. Also, while otsukuri is older than mukozuke, it has historically been influenced by the cha-kaiseki trends. On the other hand, while Edo’s sashimi originated from otsukuri, at some point it became an original cuisine based on the Kanto culture and continues in that form today.

Sashimi is served accompanied by garnishing that is representative of “ken” and “tsuma”. These not only serve the role of eliminating the fishy odor and also promote digestion of the sashimi, but they also provide natural colors and season to go with the season of the fish which is important in the arrangement for the visual changes and the scenery of the dish. In addition, fragrant or pungent items that further bring out the natural flavors of the seafood are served. This completes the perfect bowl of sashimi. “Ken” is written as “剣” (which means sword) and refers to things like daikon radish and cucumbers which are thin and pointed. Conversely, “tsuma” is written as “褄” (which means hem or edge) and refers to everything that is placed around the sashimi. Originally, there was no clear distinction between ken and tsuma and in a broad sense, tsuma can be used to refer to the combination of ken and pungent tastes. The pungent tastes mean things like grated daikon radish, grated wasabi and ginger, which already appeared in cooking literature in the Muromachi era, and these items have digestive and bactericidal effects.

Finally, in the olden days, people used to say, “Don’t bite sashimi” or “Sashimi that goes down smoothly”. These words offer a lot of information about a way of eating that we don’t see anywhere in the world, where “raw fish is filleted and then cut into small pieces then eaten alone.” First of all, the texture (surface texture, composition, the feel on the tongue), which affects the human sense of taste. In other words, complex stimuli felt when taking a bite such as elasticity, firmness, crunchiness and smoothness. There is scientific data that states that 50% of the sense of something tasting good comes from texture and the point of these phrases is, “Sashimi should be cut thin, so that it can be eaten in one bite and goes down the throat smoothly.” Furthermore, sashimi is a cuisine that should be prepared, “With the sharpness of the knife and the skill with which it is used.” The most important thing when cutting sashimi, is that it appears to be a color with a unique shine. This color is only achieved in sashimi when the fish is fresh and is cut skillfully with a sharp knife that cuts well. In other words, it can be said that the delicious taste of sashimi is the result of the artistic beauty created by skilled knife work.

What is another Kaiseki Ryori?

What is Kaiseki Ryori?