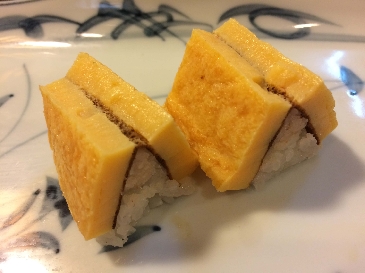 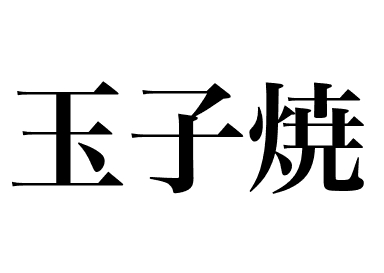 What is Tamagoyaki? What does Tamagoyaki sushi taste like?
What is the popular topping that uses brightly colored yolk to complement the sushi coloring, has a sweetness that you won’t find in fish toppings, and an enjoyable texture? It’s Omelet (tamagoyaki). There is an old phrase, “Sushi experts start with tamago.” Tamagoyaki is a topping that is said to showcase the skill of a chef as there are clear differences between the shop based on the flavoring, the way it is cooked, and the way it is made into Nigiri sushi.

The omelet toppings often seen at conveyor belt sushi restaurants are Dashimaki Nigiri sushi, but at conventional Edo-stye sushi restaurants, “kura-gake”, where the egg saddles the rice, is the more common serving method. Atsuyaki** (thick) omelet is first cut into a nearly square shape, which is then cut in half. Next, it is slit down the middle and bent in half. The piece is placed over the shari (vinegar rice) to complete. Sometimes oboro is added between the shari and omelet. It looks like a saddle on a horse, so it’s called “kura-gake” which can be literally translated as ‘putting on a saddle’. This preparation method is only common at Edo-style sushi restaurants and is the traditional way of serving tamagoyaki.

However, one characteristic of tamagoyaki is that each restaurant comes up with its own take on it. Depending on the restaurant, besides the Edo-style “Kura-gake” shape of sushi, there is also “Kashiwa-zuke***” made with shari wrapped in thin egg omelet, and shari stuffed in the slit of a dashimaki omelet. However, the number of restaurants that use pre-made tamagoyaki sold at the market is increasing, in order to save time. If this is the case, then the phrase “Sushi experts start with tamago” may not apply anymore, but that’s also precisely why if you come across a sushi restaurant that has continued making tamagoyaki with painstaking care, make sure to enjoy both the unique flavor and arrangement.

*Dashimaki: Tamagoyaki that includes beaten eggs, and dashi (soup stock) made from kelp or dried bonito, then cooked in a short amount of time. After a course of uniquely flavored nigiri-sushi, this sweetness is comforting and is also a great closing piece.

**Atsuyaki: Tamagoyaki that includes shiba shrimp and fish paste and yams, then is cooked in the shape of sponge cake. It takes time, so there was a time that long-established shops increasingly withered to just barely keeping the old form, but in recent years, the young chefs in their thirties, who are currently towing the sushi industry line, have started making tamagoyaki again. Also, tamagoyaki originally had a sort of dessert role, and in recent years it has become even more notably dessert-like.

***Kashiwazuke: Each restaurant has its own flavor, and while some have a simple, light flavor, others use a lot of mirin and salt for a stronger flavor. Some restaurants also make either sweet or savory tamagoyaki based on whether it will be served as part of a nigiri menu, or as a side dish paired with sake. (Revision date: September 29, 2020)