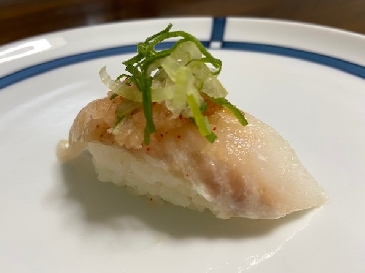 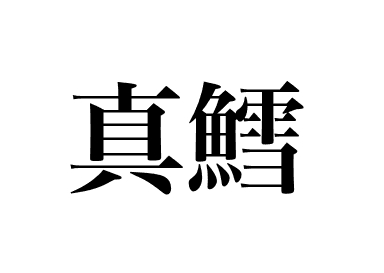 【Nigiri: Shiromi】
Of the approximately 30 types of cod, the Madara (Pacific cod), Sukesoudara (Alaska pollack) and Komai (Saffron cod) are the three types found in Japan. The hauls for all three have decreased due to overfishing and the situation has become serious. Cod in Japan generally refers to Madara. The Madara is a really big eater, but its fat content is very low considering. About 80% is water content and it loses its freshness very easily.

Madara is the cod used as a sushi topping. Because it is soft and watery, it is not used raw. The fish is cut and divided, salted and then sandwiched between kelp to transfer the flavor and fragrance. In other words, kobujime is performed on the Madara before it is used. That is how plain the cod is. It is a fish that lives in the cold sea waters and until recently it was never used as an Edomae sushi topping. Nowadays, in rare cases cod that has been killed using Ikejime before taken to the market is used in Edomae sushi.