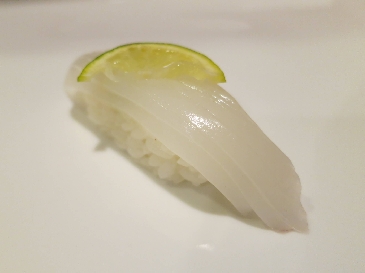 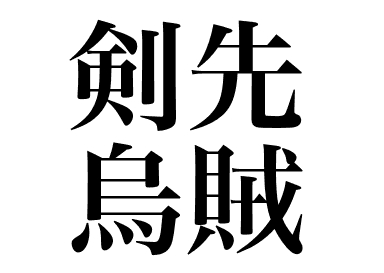 【Nigiri: Shellfish】
Kensaki ika (Swordtip squid) is found in coastal and nearby waters from central Honshu southward in the East China Sea, from the South China Sea to Southeast Asia, and in Northern Australia. The torso is 40 cm long and the spawning season is from April to October, peaking in Spring, Summer and Autumn. The life span of the Kensaki ika is one year.

The shape of the fish’s body differs depending on when it is born and where it lives, so it goes by many names at production centers and markets. The long, skinny ones are called Kensaki ika or Aka ika. Thicker ones are called Shiro ika or Budou ika. Furthermore, these are called Akaika in Kanto and Shiro ika in Western Japan, but flying squid, which is a separate type of squid, is also called Aka ika, so it can lead to quite a bit of confusion.

It is cut along the fibers with a knife to make a smooth texture. With Shari, it is a tasty and sweet piece of Edo-style artwork.

Related contents:
What is used as a substitute for the expensive Mongou ika?