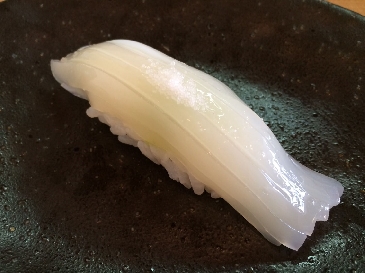 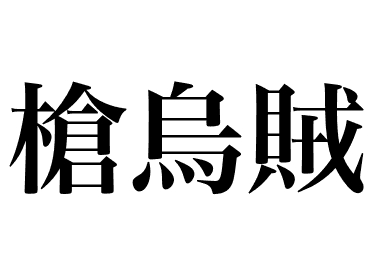 【Nigiri: Shellfish】
Yari ika (Spear squid) is found from the southern part of Hokkaido southward, from Kyushu to the East China Sea, and along the coast and nearby waters of the Yellow Sea. They chase small fish and create schools to live with, in the offshore seas, at 100 m deep or more. Their torso length is 40 cm. The spawning season runs from February to June and the Yari ika lay their eggs about 60 to 70 m down from the sea’s surface. Their life span is one year.

Yari ika is called as winter squid and its flesh gets really tasty right before its spawning season during the spring. Since it has firm flesh, the chef makes Kakushi boucho (small cuts) along its fiber in order to make it easier to bite. The fine sweetness of flesh can be enjoyed. The squid is immersed in boiling water slightly and then stuffed with Shari. This method is called Inrouzume and one of the old techniques of Edo style.

What is used as a substitute for the expensive Mongou ika?