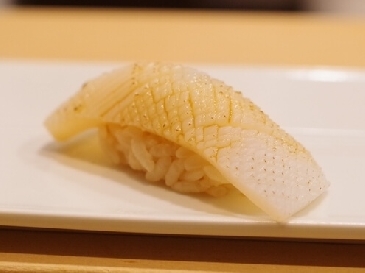 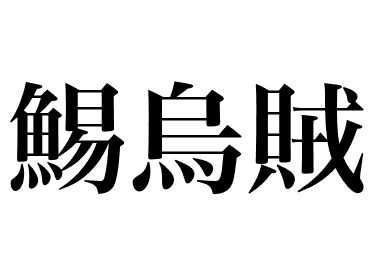 【Nigiri: Shellfish】
Surume ika (Japanese common squid) is found around Japan and from the Sea of Okhotsk to the East China Sea and its torso is 25 cm or longer. The main spawning sites are from the waters around Kyushu to the East China Sea. Once they are born, they ride the Black Current and the Tsushima Current northward, heading for areas in the sea with abundant food. The schools that hatch in winter are caught in large quantities in the Sanriku, Eastern Hokkaido and Northern Hokkaido areas while the schools that hatch in autumn are caught in the open waters of the Japan Sea.

It accounts for half of the squid caught in Japan and can be eaten throughout most of the year. As Surume ika meat is a bit tough, it is cut into thin strips and then Kakushi boucho is used to cut the fibers of the ika before making it into Nigiri sushi. Another method is cut even thinner as Itozukuri then making it into Nigiri wrapped with a strip of seaweed to hold it together. When Geso (tentacles) are rubbed with salt and then boiled, it makes for fantastic sushi.

Depending on the Edomae sushi specialty shop, either boiled Surume ika (where the Surume ika is boiled only for a few minutes in a mixture of soy sauce and water) is made into Nigiri sushi, or sushi rice is packed into the boiled squid to make Inrouzume.

They have a high content of low-calorie, high-quality proteins and are rich in taurine, which is thought to have effects of treating fatigue and lowering cholesterol. The liver has high vitamin A content. As the Surume ika can host the anisakis parasite, you must be careful when consuming it raw.

What is used as a substitute for the expensive Mongou ika?