Salmon is a popular sushi topping throughout the world, but there are actually a wide variety of types. Do you know the difference? Read on to learn the details about the salmon you always eat.

The following are the 8 basic types of salmon popular for eating throughout the world. However, academically you could say there are 12 types. In Japanese salmon is referred to as “鮭” (sake/salmon) or “鱒” (masu/trout). The characters look different, but they are part of the same family and there aren’t clear biological categories to separate them into. Incidentally, in English the type that make their way into the sea are called “salmon,” and those that remain in freshwater their entire lives are known as, “trout.” In this article they are all considered to be part of the salmon family.

Japanese: Masunosuke. This is the largest of the salmon family. It is found over a wide area, mainly in northern parts of the Pacific Ocean such as Alaska as well as the Okhotsk Sea, northern Japan Sea. They don’t swim upstream in Japan’s rivers, but a small number are fished along the Pacific coast of Hokkaido while migrating. They are also farmed in the US, Canada, Australia, Chile, etc.

Japanese: Shirozake. This is what people refer to when they mention salmon in Japan. They migrate from Okhotsk, Kamchatcka and the Bering Sea to the Gulf of Alaska, spend 3-5 years in the northern Pacific Ocean, then return to Japan’s rivers. Those who come to the Tohoku and Hokkaido coastal regions from September to November during the spawning season are called Autumn Salmon.

Japanese: Karafutomasu. These fish are distributed widely from California to Alaska, the Korean peninsula and Hokkaido. In Japan they primarily swim upstream in the rivers around the Okhotsk Sea and Nemuro Channel. As a food, the body is soft and it is often canned.

Japanese: Ginzake. Wild Silver salmon inhabit the Northern Pacific ocean regions and don’t swim upstream in Japan’s rivers. Most of the Silver salmon currently in circulation has a stable supply from aquaculture. They are primarily used for processing and the price is a bit lower.

Japanese: Benizake. Red salmon are distributed throughout the northern Pacific Ocean, Okhotsk Sea and Bering Sea. There are no wild Red salmon born naturally in Japan’s rivers. They are the same in that they are born in rivers, grow in the sea, then return to the river, but a unique characteristic is that they spend years in a lake they come across partway through the river. Therefore, in order to breed Red salmon, there must be a lake on their upstream route. The aquaculture hasn’t been established for this type, so they are all wild. They are mainly used canned, frozen, or as salted fish. They are also delicious smoked. 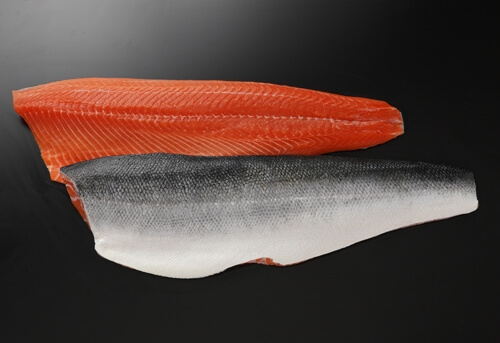 Japanese: Taiseiyosake. Natural Atlantic salmon are widely distributed around the North Atlantic and its tributaries. Farmed Atlantic salmon are chilled from their locales, then distributed by air. They are never frozen, so they have a relatively nice texture and they are characterized by the fat content and delicious-looking color. It is the most expensive type of farmed salmon. They are also the first fish farmed in seawater in Europe.

Japanese: Nijimasu. Rainbow trout is native to the streams of the west coast of North America. They are named for the wide vertical shiny, rainbow stripe on the side of their bodies. Salmon that are small and always stay in streams are called Rainbow trout. The larger type that live in the sea, spawn in rivers, and have a black mark on the top of their heads are called Steelhead. The two names show that they were thought to be different fish. In Japan they are primarily farmed in freshwater. 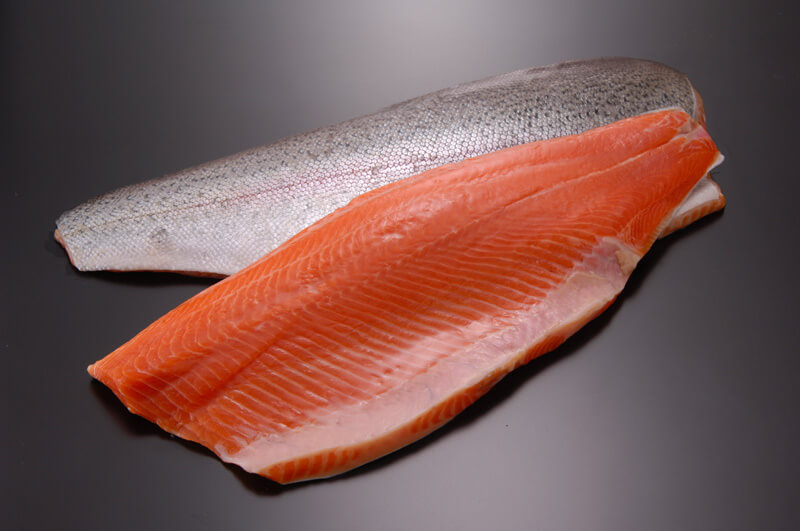 This is a combination of the Rainbow trout that descend to the sea and the Rainbow trout that live their entire lives in freshwater, and are farmed in sea water. Generally they are distributed frozen, as fillets. This is the type that is just called, “salmon” at conveyor belt sushi restaurants. Production is stable, they are cheap and tastes good. They are characterized by not having the strong odor that salmon is known to have. The product is also called Trout salmon.

Main types of salmon used in sushi throughout the world

Almost all of the salmon used as a topping at sushi restaurants throughout the world are Salmon trout farmed in the sea in Chile, Norway, etc., or Atlantic salmon farmed in the seas in Norway, Australia, etc.

Main types of salmon used in sushi in Japan

In the first place, salmon is a sushi topping that isn’t used as a normal nigiri topping at sushi restaurants in Japan (see here for the reason). However, lately at conveyor belt sushi it has become the most popular topping by far. The beautiful coloring and the soft fatty texture suits the taste of people today. These are mostly Salmon trout and Atlantic salmon. However, in Japan it is considered to be a specifically conveyor belt sushi topping and there are still very few Edo-style sushi restaurants that serve sushi with Salmon trout or Atlantic salmon toppings.

However you will find some top-grade sushi restaurants that serve rare salmon sushi toppings such as Masunosuke, Tokishirazu, Keiji and Sakuramasu caught during migration off the shores of Hokkaido, etc. 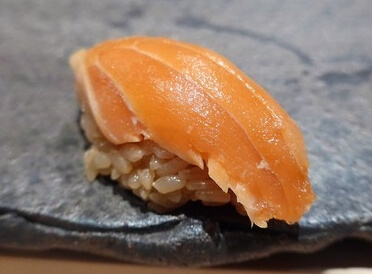 The Japanese “Masunosuke,” refers to King salmon. This is the largest of salmon with an especially high fat content and it is definitely the king of salmon when it comes to taste as well. There are only a few available for fishing along the coast of Hokkaido, etc. and they are extremely expensive. The peak season is from spring to early summer. 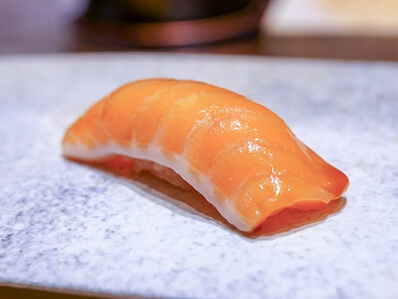 The Japanese “Tokishirazu” refers to Chum salmon. Tokishirazu are salmon caught from spring to the beginning of summer. They are the same chum salmon found in the fall, but since they aren’t caught during the spawning season, the fish don’t have eggs or milt, and instead have a high fat content. The name “Tokishirazu” stems from the fact that these fish are caught out of season, in summer and the name means ”ignorant of time”. 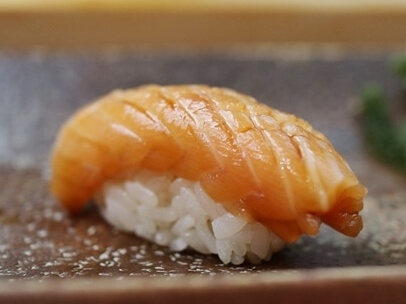 The Japanese “Keiji” refers to Chum salmon. Keiji are young salmon with immature ovaries or testes. Only 1-2 Keiji are found in a normal catch of 10,000 salmon. Normal salmon fat content is 2-15% but the Keiji have a very high body fat percentage at 20-30%. In the autumn, Shiretoko, Abashiri and Autumn Salmon can be caught together, so the salmon swimming upstream in the Russian rivers are said to have gotten lost. 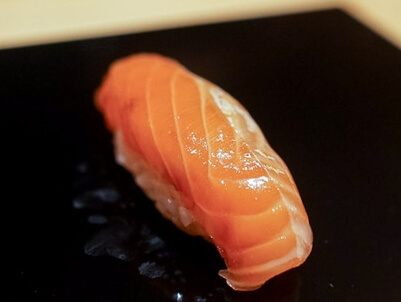 Sakuramasu is an endemic species to Japan, so the English name is a direct transliteration of the Japanese pronunciation. They are caught in the rivers near the estuaries, when swimming upstream. Normally they spend a year and a half in the rivers then descend to the sea in the spring. After migrating in the ocean for a year, they return to their home river to swim upstream the next spring. In contrast, the type that stay in the river without descending into the sea are called Yamame. The taste is supreme when eaten raw, but there is a risk of parasites so they are frozen immediately after freezing and then used as a sushi topping after a certain amount of time has passed. It has a strong umami flavor and a perfect sweetness. The peak season is spring.

So what did you think? To put it simply, these are the only types of salmon used for sushi. Salmon trout and Atlantic salmon are used in things like California rolls, so you have probably eaten them before. But if you see a rare topping such as Masunosuke, Tokishirazu, Keiji, or Sakuramasu in the topping case, don’t hesitate to order. I’m sure you will be moved by the way the Edo-style sushi brings out the maximum umami of the fat, without killing the flavor of the wild salmon. Just for your reference.

Related Content
Salmon is not used as a topping in Edo-style sushi!

Reevaluating the serious risk to health posed by farmed salmon!