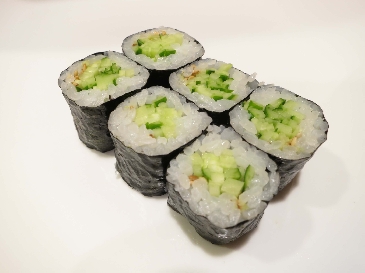 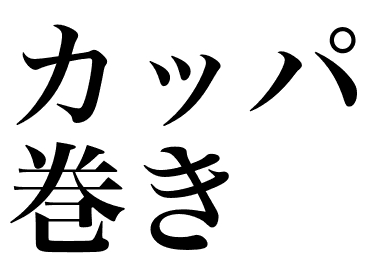 What is Kappa maki? What does Kappa maki taste like?
With thinly sliced cucumber, rice and sprinkled white sesame seeds are rolled with nori seaweed. Cucumber roll or “Kappa-maki” got its name from a Japanese imaginary creature “Kappa” whose favorite food was believed to be a cucumber. Kappa-maki should be rolled in a way the cut end surface comes in a square shape.

White sesame and chopped ooba (perilla) may be added before wrapping to bring out the flavor of the cucumber. This roll is crispy when biting into it and it leaves your mouth feeling refreshed. This is the perfect way to cleanse your palate after eating an especially fatty sushi topping.

Why is cucumber called “Kappa”?
At sushi restaurants, cucumber rolls are called “Kappa-maki”. This can be shortened to “Kappa” and sushi chefs will understand this means “cucumber”. However, “Kappa” isn’t necessarily understood as “cucumber” at supermarkets or green-grocers. There are probably people that think cucumber is only called “Kappa” at sushi restaurants. However, that’s not the case. There is a superstition from long ago that the mystical creature called the “Kappa” loves to eat cucumbers, and that’s why sushi restaurants started calling it this. Actually, cucumbers and eggplants are often used as offerings at summer festivals at shrines. Also, there is a high frequency of wind and flood damage and water accidents in the summer, so summer festivals have a deep connection with Kappa, which are meant to be an incarnation of the water god. Furthermore, the cut end of a cucumber looks like a Kappa’s head, which is the source of the belief that it’s the creature’s favorite food. Also, Edo-style sushi restaurants are known for being energetic. The sushi ordered is served one after another at a quick pace with no waiting time in between. The word “cucumber rolls” takes too long to say for such a sushi chef. They can’t use such a slow way of speaking. Instead, they use the shorter and punchier Kappa. However, it’s not clear when this moniker started.

As a side note, the originator of cucumber rolls is said to be Hiroshi Yasui, the fourth at Yahatazushi. He couldn’t obtain sushi toppings because of the food shortage in the postwar period, but that was the beginning of those rolls when he tried rolling small cucumbers which just became available, as a desperate resort. Although it was called a cucumber roll at first, seems like it changed its name to kappa maki as time passed.