In other words, avoid them from May to August. 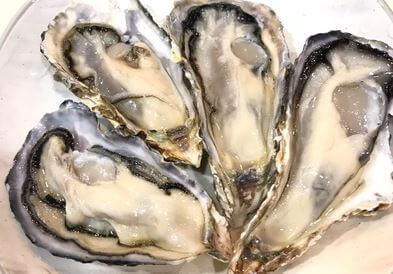 It’s won’t hurt you to eat Magaki (Japanese oyster), which has its spawning season in the summer, but in the months with no R in the name, the glycogen concentration is low, so you can’t get the full-bodied texture that you get in winter. In addition, almost all amino acids such as glutamic acid, glycine, alanine, arginine, which are important components for delicious flavor, are known to accumulate from winter through spring, and conversely, they decrease in the summer, which is the spawning season. You cannot expect the same deliciousness from oysters in summer as you can from months that contain the letter R.

Furthermore, the oyster takes in large amounts of seawater and filters out the plankton for its food. Therefore, in warm seasons it fills up on large volumes of the toxic plankton that proliferates in the sea. Eating toxic plankton can make the oyster toxic and toxified oysters can cause food poisoning when consumed by humans. In addition, in the warmer months, the oyster loses its freshness faster after being harvested, increasing the likelihood of getting a bad one and risk food poisoning. Therefore, it’s best to not go out of your way to eat oysters in summer.

On the other hand, one certain oyster is actually in season in summer.

Iawagaki (Rock oyster) is known as the summer oyster. This type is close to the Magaki, and it lives attached to reefs at depths of 2 to 20 m, deeper than the intertidal zone and facing the open sea. A large Iwagaki has a shell length of 10 cm, a shell height of 20 cm or more and weighs more than 1 kg. However, the edible part is small compared to the size of the shell. It is an oviparous hermaphrodite. Growth is slow at a rate of around 5 cm in one year, around 7 cm in two years. It takes three to four years to reach 10 cm or more and grow big enough to harvest.

The glycogen volume in Iwagaki is high from March to July, peaking around May, and it then decreases from September to October. The main production areas are the Sea of Japan on the coasts of Akita, Yamagata, Niigata, and Tottori. Many of the Iwagaki in circulation are harvested from the wild, unlike Magaki, which is almost all farmed.