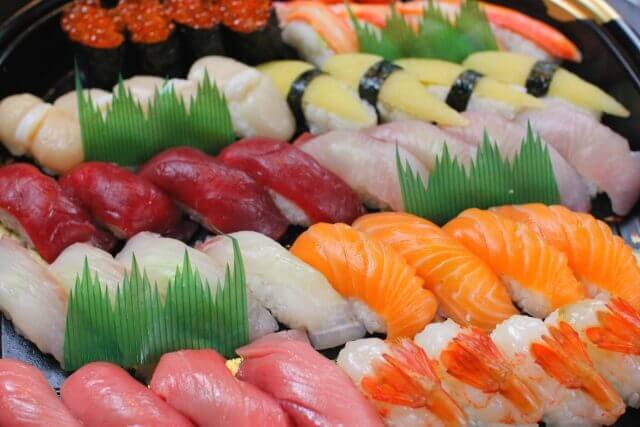 Nigiri sushi is generally made with raw seafood. It can be said that the seafood starts to go bad as soon as it is put on warm rice. Of course, at the stage of preparation, there are procedures being taken to reduce the causative micro-organisms of food poisoning. Out of all food that is commonly eaten raw, sushi is considered to have the least micro-organisms that cause food poisoning.

For example, Vibrio parahaemolyticus, a typically known bacteria that causes food poisoning, attaches to seafood, and if the conditions, such as temperature, are just right, it proliferates at double the speed of other food poisoning bacteria. When you are eating at a sushi restaurant, bacteria growth is being suppressed. However, if you take sushi home to eat it, depending on conditions bacteria could proliferate.

This is why as a basic rule, you cannot take sushi home from a sushi restaurant.

So then, what is the difference between sushi sold at the grocery store and prepared at sushi restaurants?

There are obvious differences between sushi made by sushi chefs and take-out sushi, as explained below.

Take-out sushi is lined up at the store, selected by the customer, then eaten at home, which takes time. Therefore, a higher amount of salt seasoning is used compared to Nigiri sushi restaurants, in order to delay the degradation in quality. Sushi made by sushi chefs at restaurants has a salt content of about 1% in the sushi rice, while that of take-out sushi has about a 2% content.

Next, with a pH of around 4.5%, it is difficult for bacteria such as Salmonella, Staphylococcus aureus, E. coli bacterium bacteria and Vibrio parahaemolyticus to proliferate, and there are experimental results that show they die out. In an experiment that measured the pH of sushi rice in take-out sushi, it was usually measured at 6%. Nigiri sushi made at a restaurant is often around 6.2%, so this acidity is put to good use in the sushi rice and could be delaying degradation.

Furthermore, although it may not be a pleasant topic of discussion, preventing spoiling and deterioration in food caused by micro-organism is done by adding preservatives to improve the shelf life. For example, classic preservatives such as benzoic acid, Sorbic acid and PH adjusters are used all over the world. There is an obligation to list these on the product label when used.

Now let’s get into the main topic.

This all being said, sometimes when you buy take-out, there are leftovers. There is no question that it is better to promptly discard them. But you may think that you can just eat it the next day, right?

You can. And it will taste the same as when you bought it.

First of all, there is something important to remember; not all toppings are equal in take-out. Unfortunately, things that require freshness like shellfish, squid, mackerel and sardines, cannot be saved. These must be consumed on the day they are bought.

Next, let’s go over how to eat your day-after sushi so that it still tastes good.

The toppings this method works for are tuna, salmon, white fish and steamed shrimp. However, the only white fish it works for are benthic fish such as flounder. As long as the meat is still transparent the next day, it’s safe. For Hamachi, which always has more than 20% body fat, which oxidizes, so avoid keeping it to the next day. Raw shrimp is out too. Steamed shrimp becomes more delicious when quickly put into sushi vinegar for storage.

The method is simple!

First, remove the Nigiri sushi topping from the rice. Next, wash that topping with running water for a few seconds and then dry well with a paper towel. Make sure you are quick in all of these steps. Finally, wrap in plastic wrap and store in the refrigerator.

Next, use a wet paper towel to wrap the sushi rice. Wrap this set in plastic and put it in the vegetable drawer if possible. If you don’t have a vegetable drawer than the normal refrigerator compartment is fine.

The next day, when you are ready to eat, heat the sushi rice in the microwave at 1000W for 10 seconds. The point is just to warm it up a little. Next, just take the topping from the refrigerator and place it on the rice. You can add some wasabi if necessary.

Incidentally, if you use this method for take-out sushi, even when consuming it on the same day, it will taste even better than just eating it right away.

The practice of sushi chefs is to put somewhat cold sushi toppings (16~19℃) or room-temperature toppings (20~23℃) on top of sushi rice that is the same temperature of the human body (37℃). We are trying to imitate this method. If you are consuming on the same day, any topping can be removed from the rice and prepared like this.

But please do not wait any longer than the next day to eat any leftovers.

Do not bend this rule. Let me warn you that the symptoms of food poisoning from shellfish and silver-backed fish are horrible. It should also go without saying that if the sushi rice has already dried out, there is no bringing it back, even with this method. Once you’ve reached that point, you just have to throw it away. Naturally, you cannot eat smelly sushi toppings.

This Inarizushi (Inari sushi) recipe was devised by a sushi chef of a popular restaurant. 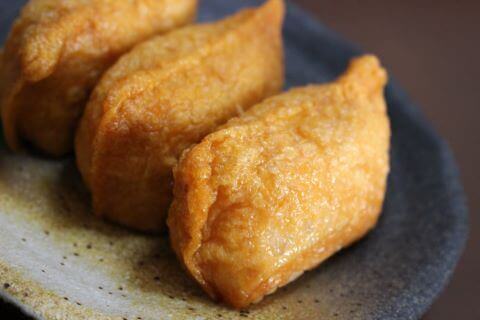 First of all, sushi rice made for Inarizushi can be used for a wide variety of uses including Uramaki and Chirashizushi, so it could be useful to learn. However, the recipe is slightly different than Nigiri sushi. The reason is that in the case of Nigiri sushi, the topping is typically one type of seafood combined with a sushi rice recipe that maximizes the flavor of that seafood. On the other hand, Inarizushi, Uramaki, etc., are filled with optional ingredients put together to enjoy multiple layers of flavors spread in your mouth. The sushi rice is essential to harmonize all the ingredients. Therefore, it is made with more sugar than Nigiri sushi. In addition to toning down the sourness of Vinegar, the sugar’s own richness works to bring out a mellow taste. Kombu is also added to the rice while it is cooking. The aim here is to create a synergy between the Inosinic acid contained in Kombu and the Umami of the other ingredients.

How to make Sushi rice

① Start by making Awasezu (the ingredients are included below). Put the Komezu, Cane sugar and salt in a saucepan and stir over low heat until the cane sugar melts. Then turn off the burner and allow it to cool.

② Next, make the sushi rice. Wash the rice and add a little less water than the measurement on the side of the rice cooker bowl. Add the Kombu and cook it to a consistency that is a bit tougher than usual. Don’t forget to take the Kombu out once the rice is done cooking.

③ Spread the cooked rice in as large a bowl as possible and pour all the Awasezu over it.

④ Use a paper fan to fan the rice while you mix it with a flat rice scoop (shamoji) by cutting through the rice at an angle, making sure not to mash the rice.

How to make Inarizushi 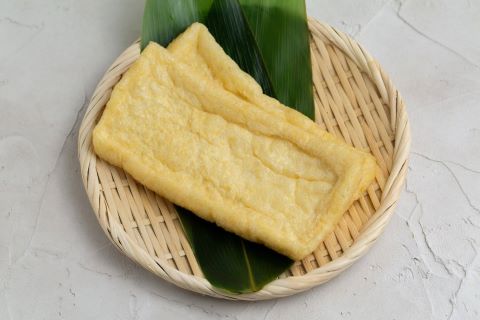 ① Spread the deep-fried tofu on a cutting board and roll it out with a rolling pin until it is completely flat. This helps to loosen the inside of the deep fried tofu so it will open easier. It might seem like a hassle, but it will help you make Inarizushi that looks even better.

③ Combine the Nijiru ingredients in a saucepan and once the sugar has melted, add the cuts of deep fried tofu. Put a lid on the pot and allow to simmer for about five minutes. Turn off the burner and let cool. If you have a wooden or stainless steel drop lid you can use that too, but if not you can use aluminum foil and a flat dish instead.

④ Squeeze the juices out of the cooled deep fried tofu, and open the saccate, being careful not to tear it. Pack the prepared sushi rice and ingredients inside. Pack the sushi rice so that the center of gravity is toward the bottom and the Inari can stand up. If you keep the bottom flat, it won’t topple over. Make sure not to mash the grains while packing the rice in. You can add any ingredients that you like. You can even cut up the ingredients in advance and mix them in with the sushi rice. If you choose not to add additional ingredients and only make it with sushi rice, you can seal the deep fried tofu. Inarizushi filled with ingredients you can see is the open version and is the standard way of making it in places like Singapore and Paris.

This recipe yields enough Nijiru for three sheets of deep fried tofu that are about 16 x 8 cm. The sushi restaurant recipe calls for boiling a large amount of Nijiru and simmer for a shorter amount of time. However in general home recipes call to boil until the Nijiru evaporates.

Inarizushi is a type of sushi that anyone can make easily. Just take these few tips from a sushi chef and you’ll be making delicious Inarizushi. Why not try it out as an appetizer for your next party? Just for your reference.

The Michelin starred sushi chef taught us this recipe for the sushi rice of chirashi sushi, serving about 2 to 3 adults. 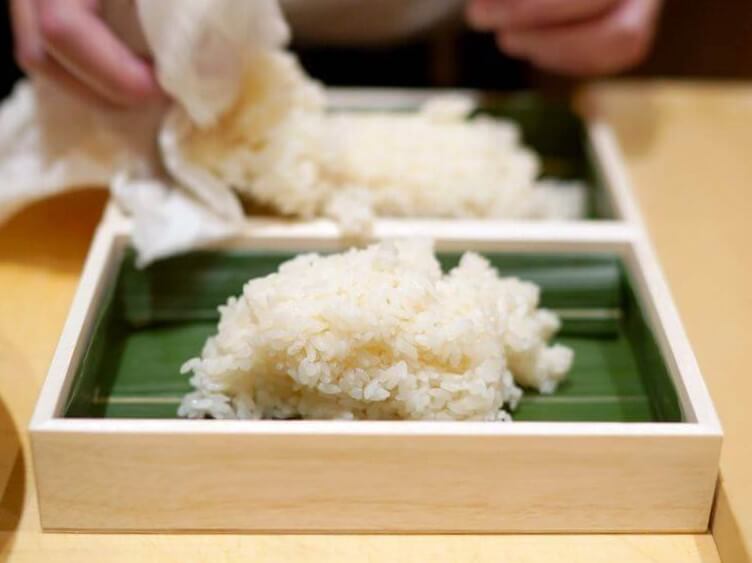 He gave out his hidden recipe, something that only a sushi chef can think of, and something you don’t see in those classic recipes. First, it might be hard to get at places like a supermarket, but he was telling us that using cane sugar (三温糖) and salt from burning seaweed (藻塩) would give great depth of flavor to sushi rice. If you can’t find them, regular sugar and salt for cooking will do. In addition to that, sushi vinegar on the market already contains sugar, salt and more, so make sure to get komezu (rice vinegar).

And if you would like to make it similar to the taste of a sushi restaurant, obtain Japanese short-grain rice, Koshihikari (コシヒカリ). Along with that, water for cooking rice should be Mineral water as well as soft water. Concentrations of dissolved calcium and magnesium in 1000 ml of water are indicated in numbers called “hardness”. By WHO standards, hardness below 120 mg/l is considered soft water. If you can’t find it, try to choose Mineral water with the number as small as possible.

The following are tips about cooking sushi rice.

We consider these extra efforts make a big effect on your result. Unique to the sushi chef, please try and follow the recipe as much as you can.

Related contents:
WHAT RICE TO USE FOR SUSHI? 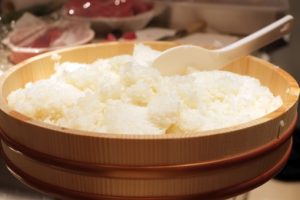 From the end of the Edo period through the Meiji period, rice was cooked using firewood and a pot. It is not easy to get the fire at the right temperature and the rice has to be cooked to the same texture regardless of where it came from or the size of the grains, so at the time the task required a skilled chef. Therefore, there were “Shari-ya” employed by sushi restaurants who specialized in cooking rice. “Shari-ya” focused on this single task and were not involved in the actual making of the sushi after the rice was passed on to the chefs.

WHAT RICE TO USE FOR SUSHI?